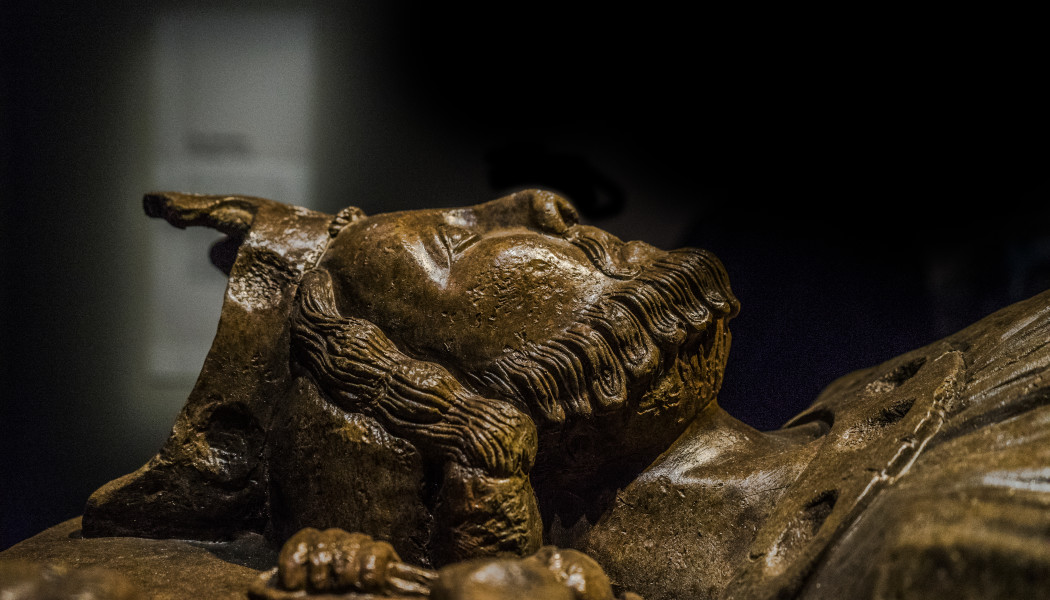 THE 39th and 40th clause of the 1215 Magna Carta gave all ‘free men’ the right to justice and a fair trial, and although ‘free men’ at the time were a minority, this right has been at the heart of subsequent charters, bills of rights and has been passed into the statute books the world over. With this knowledge the curators at the British Library set about bringing the story to life through 200 documents, including the Library’s own two copies of the 1215 Magna Carta, that tell of its legacy. Signed on 15 June 1215 at Runneymede by the notorious tyrant King John, the great charter was a peace treaty that averted a rebellion by the country’s Barons over, among other things, high taxes. However, just months later it was annulled by a papal bull, with Pope Innocent III declaring it ‘base and shameful, null and void’. But this wasn’t the end of the document as a revised version was issued a year later (after King John’s death) and has since been included in the American Declaration of Independence and was cited by Nelson Mandela in his Pretoria trial of 1964 as he continued to fight apartheid in South Africa. 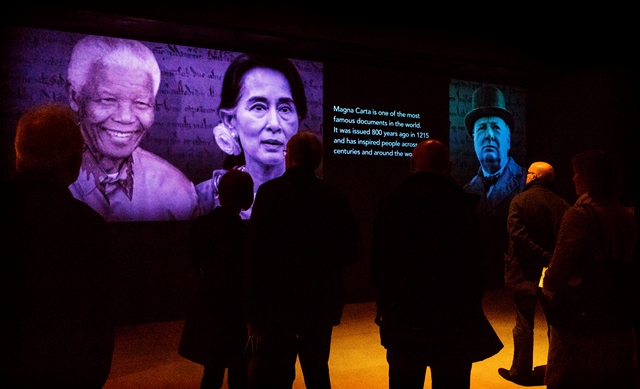 Politicians including Nelson Mandela, Ang San Suu Kyi and Winston Churchill have all made references to Magna Carta. Photograph by Tony Antoniou

Perhaps the loftiest of mentions came in 1948 when the former First Lady of the US, Eleanor Roosevelt called the new United Nations Universal Declaration of Human Rights ‘a Magna Carta for all mankind’. All these references are mentioned in the exhibition, which opened a month ago, with audio of Mandela, video of Roosevelt, the original papal bull and the Declaration of Independence, on show in the UK for the first time. 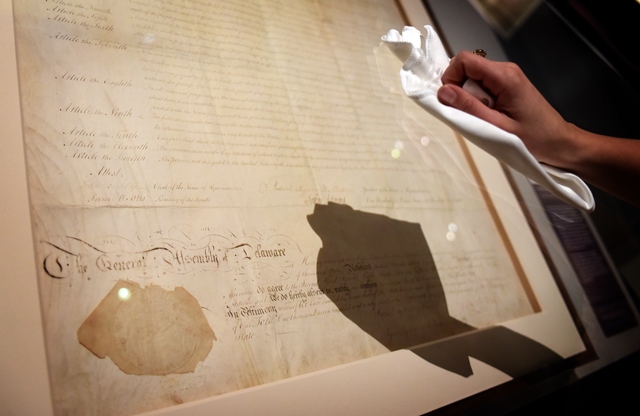 Julian Harrison and Claire Breay of the Library’s Ancient, Medieval and Early Modern Manuscripts team spent four years working on the exhibition, and said it was their intention from the outset to put on the largest and most significant exhibition ever devoted to Magna Carta. “We were aware that many people have heard of the document, but it was equally clear to us that less was known about its origins and contents, and who it had influenced over history,” said Harrison. They were keen that visitors would be able to explore what Magna Carta means to them, and how it has been used (and, occasionally, abused) over the centuries. “We were also determined to bring our story to life for children, and so we developed a children’s audio guide and created some great animations for our website: http://www.bl.uk/magna-carta/videos. We’re very proud that under 18s get free entry to our exhibitions,” said Harrison.

Together the two curators selected the objects, edited the catalogue and wrote the panels and labels, besides working with colleagues across the Library, including the conservators and press team, to put together the show. They also appointed a researcher, Alex Lock, to focus on the post-medieval legacy of Magna Carta. “It has been an exhilarating (and sometimes exhausting) experience.” The team received advice on the storyline and the selection of exhibits from a panel of academic and legal experts, and were also collaborators in the Magna Carta Project sponsored by the Arts and Humanities Research Council (together with the University of East Anglia, King’s College London, Canterbury Christ Church University and the University of Oxford). New discoveries made by the Magna Carta Project feature in the exhibition, for example, the recent discovery that one of the British Library’s two manuscripts of the 1215 Magna Carta was sent to Canterbury Cathedral in the Middle Ages. 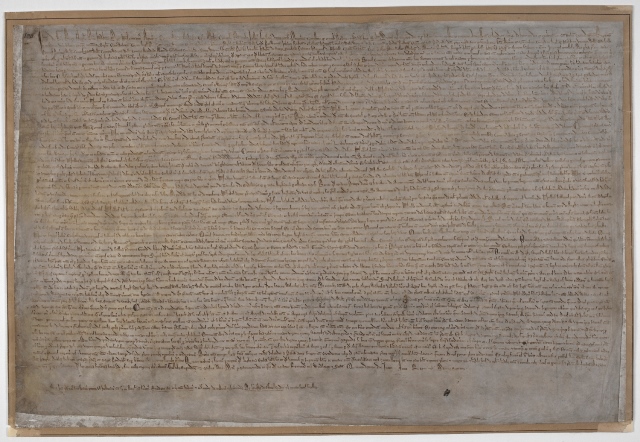 “One of our main challenges was how to bring Magna Carta itself to life, seeing that it’s a relatively small, parchment document, written in Latin and in tiny handwriting 800 years ago,” said Harrison. A decision was made early on that the Library’s two manuscripts of Magna Carta would be the culmination of the show, and that everything on display would lead up to them. “Otherwise, if we had presented Magna Carta in its true chronological order, these documents would have been almost the first things that people saw! Placing them at the end of the show has been a spectacular success. The exhibition has been packed out over the first month, and the advanced ticket sales are by far the highest for any British Library exhibition.”

There is a giddying array of documents on display, including unique items from the Library’s own collections – Magna Carta itself, the Articles of the Barons (the manifesto presented by the barons to King John in June 1215), the papal bull annulling Magna Carta in August 1215 – and a number of exceptional loans from other institutions. These include King John’s will from Worcester Cathedral (the oldest surviving original English royal will), the Petition of Right and Bill of Rights from the Parliamentary Archives), and, for the first time ever in the United Kingdom, the Declaration of Independence from New York Public Library (Thomas Jefferson’s own copy) and the US Bill of Rights from the US National Archives.  “It’s hugely significant to have all these items on display in one place for the very first time,” says Harrison. “They demonstrate very clearly how Magna Carta was originally created, and how it has influenced politicians and campaigners alike worldwide over the past 800 years.” 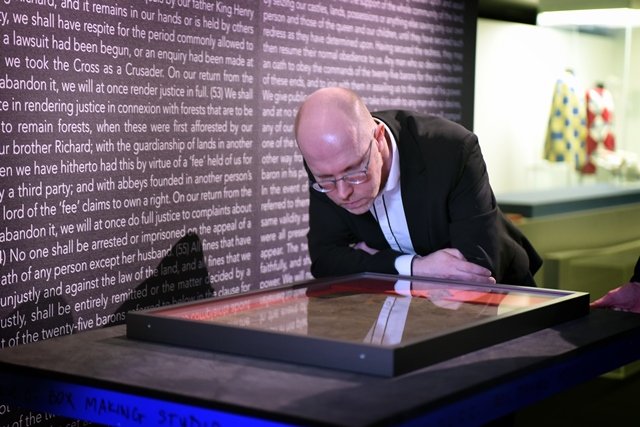 Other objects include a replica of King John’s tomb (from the original at Worcester Cathedral) manuscripts, printed books, newspapers, prints and drawings, paintings, cartoons, photographs and various artefacts (such as the vestments of a medieval archbishop of Canterbury, two of King John’s teeth, and the axe made for the execution of the Cato Street conspirators in 1820).

The curators appointed Alan Farlie of RFK Architects as the exhibitions designer as his reputation was already known to them having designed the recent Shakespeare and Viking exhibitions at the British Museum. Farlie says the challenge was to create an elegant graphic language without dominating or competing with the content, ‘which was in many cases fragile and of subdued colouration and tone, and in turn we wanted to strengthen the relationship between each section theme’.

Inspired by the diversity of the paper content, structure and texture, RFK Architects explored the idea of using subtly varying paper folds to reference individual documents from each thematic section. “The final design incorporated the softly graded photography of the shadow play of paper folds, from implying stitched medieval volumes to the suggestion of lighter weight, overlaid layers of 1950s Government papers. It was equally as important not to compete with the richness and variety of hand scribed text and chose the Avenir typeface, its open, human touch working well to deliver information across the hierarchy.” The graphics were then printed directly to a 3mm white, solid core metal composite that maintained strength in structure but conveyed a lightness alluding to paper. 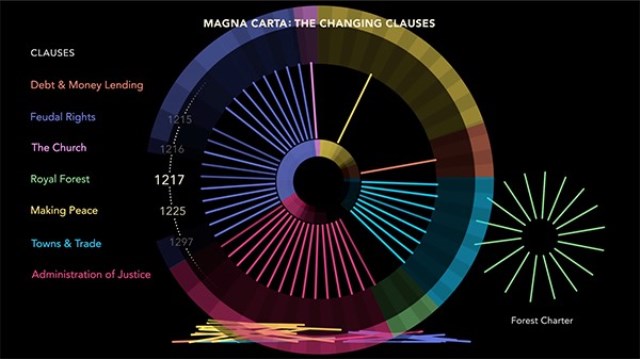 A total of 90 of the exhibits are loans, from 25 different institutions, including the British Museum, The National Archives, the V&A and the Palace of Westminster. This meant that those working on the exhibition had a tight deadline. “The challenges we had were the time frame,” says Jeff Davis of Moule Partnership, which built all of the walling and showcase surrounds and fitted specialist lighting within the showcases. “We had to be complete before the objects arrived – normally there is an allowance but because loan objects were booked there was no chance of us running late. We arrived on Jan 29 and were finished by 22 February. The first loans started arriving on the 23rd.” 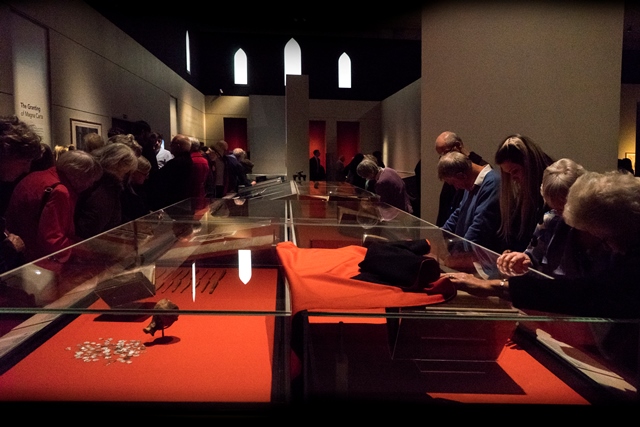 A series of talks have also been commissioned with the next up a lecture by comedian and activist Mark Thomas who considers what rights and freedoms should be enshrined in a new Magna Carta on Monday, 20 April and later in the month Dr Thomas Asbridge (Queen Mary, University of London) charts the remarkable rise to power of William Marshal, earl of Pembroke who was the first baron named in the 1215 Magna Carta on Monday, 27 April. Magna Carta: Law, Liberty, Legacy runs until 1 September. For tickets and a list of talks click here.