The Staffordshire Hoard Gallery opens today at Birmingham Museum and Art Gallery (BMAG) showcasing a large portion of the 4,000 pieces of gold and silver discoverd in a field and dating back 1,400 years – the largest discovery of its kind.

Developed with the help of a £700,000 Heritage Lottery Fund grant and donations by Garfield Weston and Arts Council England, the Anglo-Saxon treasure will be brought to life with microscopes, touch screens and videos.

The new permanent exhibition dedicated to the Hoard will provide an interactive experience with a touch screen table showing computer images of individual items, rotate and enlarge them and find out more detail about how they were made and what they were used for.

There will also be a chance for youngsters to dress up in Anglo-Saxon costumes and take lessons in olde English while sitting in a replica of a Mead Hall – a reconstruction of a 7th century building.

“What have been the developing the collection since the hoard was originally found in July 2009,” said David Symons – curator of the Staffordshire Hoard.

“It’s been a phenomenal project to work on as it’s not everyday someone gives you a unique collection.

“The impact of the discovery was colossal, it’s the only discovery of its kind made so it’s hugely significant and there is approximately 5kg of gold and 1.5kg of silver.

“The main thing was the long-term future of the hoard and we have been trailblazing in many respects.” 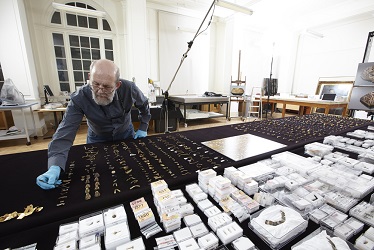 Glass cabinets will display the folded cross, the Millefiori stud and sword pommel which have been painstakingly cleaned and catalogued.

The Hoard was found by Terry Herbert with his metal detector in a farmer’s field near Hammerwich, Staffordshire in 2009 and is Britain’s largest ever treasure case.

“This is a very strong local partnership and the collection is being displayed in the region where it was found which would have been known as Mercia at the time,” said Symons.

“We are also trying to develop the Mercian trail so that the West Midlands can become a focal point for understanding Anglo-Saxon England.”

Symons said as well as the exhibition research and conservation teams are working on an archaeological and scientific publication which will be one of the first of its kind to be published in print and online so researchers from around the world can study the find in detail.

“We have been pioneering a way that will be a benchmark for future finds,” he said.

The Staffordshire Hoard Gallery opens today at 10.30am to 5pm and is free.