The ancient Egyptian statue Sekhemka dates from c.2400 BC and is considered to be the finest example of its kind anywhere in the world. Northampton Borough Council sold the Sekhemka limestone statue in July 2014 to an overseas buyer for nearly £16m at auction to help fund an extension to Northampton Museum and Art Gallery. The museum was subsequently scrapped from the Museum Association Accreditation Scheme in the autumn. Arts Council England also ruled the sale breached the accredited standards for how museums manage their collections.

Sekhemka was gifted to Northampton’s museums by the 4th Marquis of Northampton in 1880. The statue, which would have been placed in his tomb, represents an ancient Egyptian official, wearing a short kilt and tight-fitting wig, surrounded by his wife, son and seven offering bearers. Among non-royal sculpture of similar size and date, it is unrivalled both for its exquisite execution and originality. 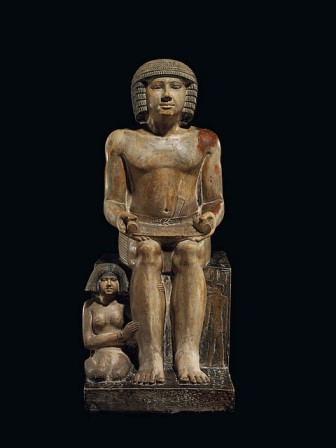 Sekhemka, c.2400 BC, is considered to be the finest example of its kind anywhere in the world

“While the identity of the sculptor is unknown, the skill and obvious devotion with which it was created ranks the maker among the leading artists of his day, whose services would only have been offered to society’s most privileged families,” said a statement from ACE.

Culture Minister Ed Vaizey took the decision to defer granting an export licence for the statue following a recommendation by the Reviewing Committee on the Export of Works of Art and Objects of Cultural Interest (RCEWA), administered by Arts Council England.

The decision on the export licence application for the statue will be deferred for a period ending on 29 July 2015 inclusive. This period may be extended until 29 March 2016 inclusive if a serious intention to raise funds to purchase the statue is made at the recommended price of £15,732,600 (plus VAT which could be reclaimed by an eligible institution).