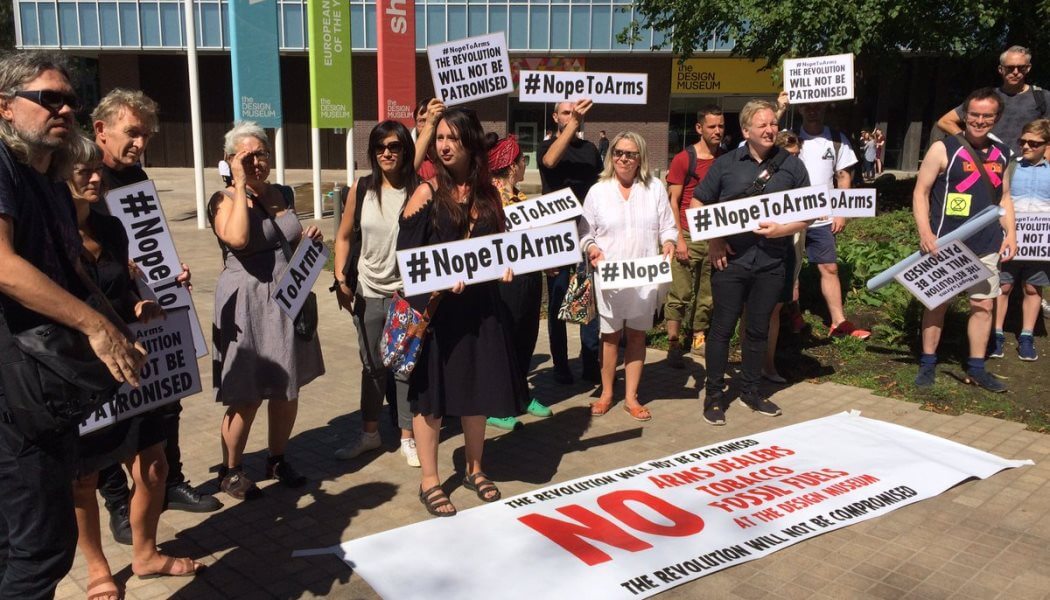 By Adrian Murphy. Main Image: Protesters outside the Design Museum. Photograph by BP or not to BP
Share

The artists are part a 40-strong group made up of mostly fellow-artists going by the name of the Nope to Arms Collective. Some have artwork on display at the current exhibition, Hope to Nope: Graphic and Politics 2008-2018 and others in the permanent collection and museum shop. On Tuesday 17 July the Design Museum said its ‘atrium was hired by a company in the aerospace and defence industry for a private event’, which the group took exception to.

This morning The Space Hijackers came to remove their Official Olympics Protestor t-shirt, which had been on display at Hope to Nope and Peter Kennard removed his Union Mask in the permanent collection display Designer User Maker, which had been donated to Design Museum. The museum had corresponded with the group to say that it would be reviewing its policies and to ask them to reconsider removing artwork.

Andrew Smith from the organisation Campaign Against Arms Trade, which has been relaying the artists’ protest letters, said: “The event should never have been allowed in the first place. The arms industry is based on war and conflict and should always have been a red line. If the new policy is to be robust then it must clearly and unambiguously rule out taking money from companies that fuel and profit from human rights abuses.”

Design Museum directors Deyan Sudjic and Alice Black said in a letter published on the museum’s website today that the exhibition had been a popular and critical success, with more than 30,000 visitors since opening on 28 March, and the long term impact of the protests would be to reduce the work that the museum does, which is designed to benefit the sector and the wider public.

“Professional activists whose work didn’t feature in the exhibition took the view that the museum had acted wrongfully and were quick to exploit the situation,” they said. “The museum is now being targeted by a group of activists, not all of whom are being accurate in their presentation of the situation. We are in the midst of an argument not of our making. We will not be seen as an easy target and a surrogate for the real targets of these campaigners. We do not want our programmes to be co-opted by the agenda of others and we stand by our curatorial independence.”

The letter went on to say that the outcome of these protests would be to censor the exhibition, curtail free speech and prevent the museum from showcasing a plurality of views. The directors wanted to assure visitors that the museum’s policies were in line with those of all other major cultural institutions around the world. “These haven’t changed since the exhibitors agreed to be part of the exhibition,” they said. “We have committed to review these policies and those that apply for event hire at the museum.”

The Design Museum, which was named European Museum of the Year in May, has committed to not having such private hires (linked to arms, tobacco and oil companies) while it takes time to ‘discuss the issues with our peers in the sector and review if any of our policies need to be updated’.

Hope to Nope exhibition free from until close on 12 August

‘We are sorry for any disappointment caused for visitors. We believe that it is important to give political graphics a platform at the museum and it is a shame that the exhibition could not continue as it was curated until its original closing date’.