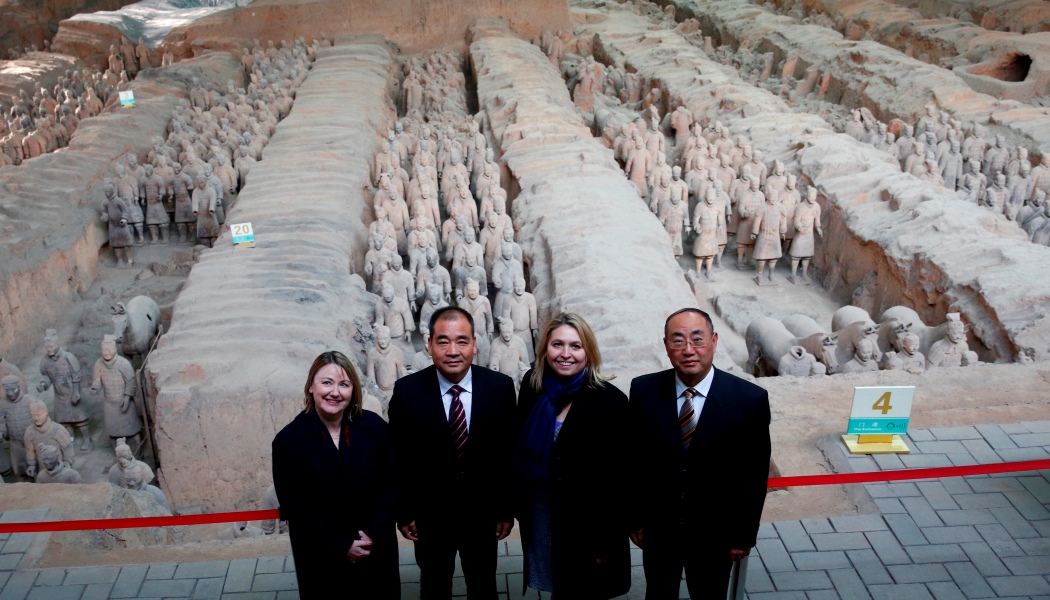 The Terracotta Warriors will be returning to the UK, it has been announced today by Secretary of State for Culture Media and Sport, Rt Hon Karen Bradley MP

Liverpool’s World Museum will be exhibiting the spectacular Class 1 National Cultural Treasures from the tomb of China’s First Emperor, Qin Shihuangdi in 2018.

The Terracotta Warriors exhibition will run for six months from February to October 2018 and will allow visitors to get a better understanding of the extraordinary story of Qin Shihuangdi, the First Emperor of China (221 to 206 BC) and this astonishing burial ritual.

The warriors were last in the UK in 2007 for what was the British Museum’s second most successful exhibition ever after the Tutankhamun, drawing in 850,000 visitors. The warriors also appeared at a smaller exhibition at the City Art Centre in Edinburgh in 1985.

World Museum says the exhibition will be unprecedented in the UK, as it will offer a new perspective on China’s history spanning three periods of more than 500 years, and is set to include a number of objects that have never been on show in the country before.

Qin Shihuangdi’s vast burial site and tomb complex was discovered near Xi’an in North West China in 1974, with archaeologists uncovering 8,000 life-sized Terracotta Warriors near Xi’an – each with individual clothing, hair and facial features. The story of the tomb’s Terracotta Warriors will be displayed alongside important artefacts and research relating to the formative years of the Chinese nation, from the pre-unification Qin Kings (307 to 221 BC) to the First Emperor’s legacy in the Han Dynasty (206BC to 220AD).

The World Museum’s 2018 exhibition will include material from museums and institutes from across Shaanxi Province – where the First Emperor and his ancestors came from – excavated over the last 40 years from the Imperial Mausoleum and selected tombs. These spectacular artefacts dating from 307 BC to the 2nd century AD, along with remarkable recent archaeological discoveries, not only shed light on the pursuit of immortality and how China’S Emperors prepared for the afterlife, but also help us to understand more about everyday life in China over two thousand years ago.

The announcement has been made during the Secretary of State’s visit to the First Emperor’s burial site and tomb complex near Xi’an, as part of the UK-China People to People Dialogue (P2P); a key pillar in the UK-China relationship, celebrating links between the two peoples.

“The Terracotta Army represents one of the most significant archeaological excavations of the 20th century, and I am delighted that a selection of the warriors will be coming to Liverpool, for the first time in 2018,” Secretary of State for Culture, Media and Sport, Karen Bradley. “The exhibition will also encourage an ongoing cultural exchange between China and Britain, further progressing the relationship between our two nations and strengthening lasting ties.”

The World Museum’s Terracotta Warriors exhibition will be a major part of Liverpool’s 2018 celebrations, marking 10 years since the city held the title of European Capital of Culture 2008.

David Fleming, Director of National Museums Liverpool, said Liverpool has the oldest Chinese community in Europe, and the museum was proud to be strengthening the city’s connections with other cultural organisations in China and creating an exhibition programme that continues to excite and inspire visitors from across the globe. “We are hugely excited to have signed a Memorandum of Understanding to bring an exhibition of such international importance to World Museum, and to be working with Shaanxi Provincial Cultural Relics Bureau in this valuable cultural exchange,” he said. “Following the success of our Mayas exhibition in 2015, and the re-opening of our Ancient Egypt gallery in 2017, this is a significant time for World Museum and National Museums Liverpool. It is really important that we stay in healthy dialogue with our international colleagues.”

Bradley is leading the delegation of the UK’s cultural industries to China as the Government attempts to strengthen its own dialogue with China following a bumpy ride earlier this year over the building of Hinkley Point C nuclear power station.