The funeral train and carriages that carried Winston Churchill from Waterloo to Oxfordshire has been reunited for the first time since 1965 in a new exhibition Churchill’s Final Journey (30 January -3 May).

The restored locomotive ‘Winston Churchill’, plus selected vehicles that both carried Churchill’s coffin and that of his wife, immediate family and funeral guests are being displayed in the National Railway Museum’s Great Hall to commemorate the 50th anniversary of the steam-hauled state funeral on 30 January 1965. 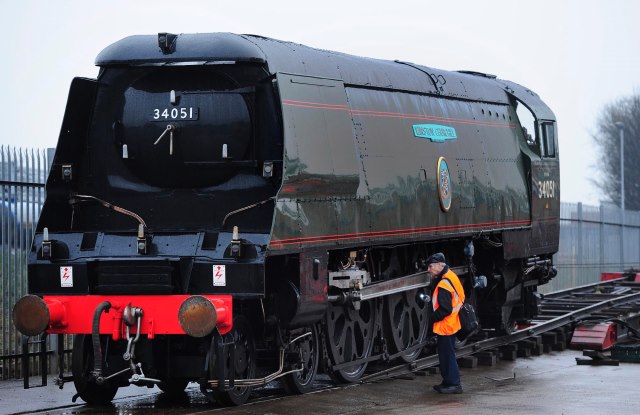 Churchill's funeral on 30 January 1965 was a historic event that has been dubbed the end of an era.

The locomotive will be displayed alongside the baggage van which carried Churchill's coffin and the Pullman carriage Lydia which carried his family and will be the first time since the funeral that these vehicles have been seen together.

At Locomotion; the National Railway Museum at Shildon the goods van S2464S that carried his coffin was restored for its historic journey to York.

Richard Pearson, the Workshop and Rails Operation Manager who has overseen the delicate task of restoring the vehicle, said: “It’s been a really challenging project and we’re really proud that we’ve managed to bring it back to its former glory.

"The steel frame of the van was in good condition but the horizontal wooden boarding was rotting and had to be replaced.”

On loan from the Swanage Railway, which brought it back from the US, it will take pride of place in a display of the funeral train at the York National Railway Museum. 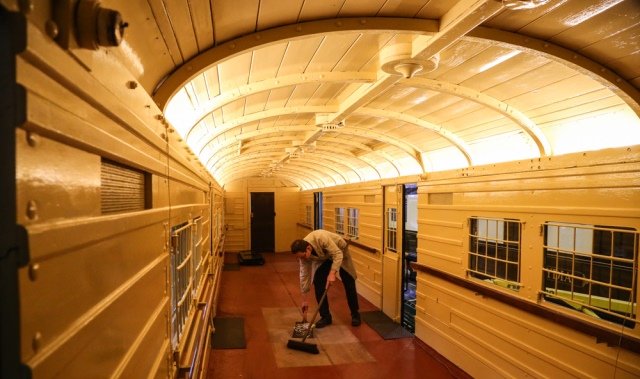 The luxury Pullman carriage, Lydia, will complete the funeral train display along with Battle of Britain Class locomotive No 34501 Winston Churchill, which has been cosmetically restored at the Mid Hants Railway’s Ropley Works. 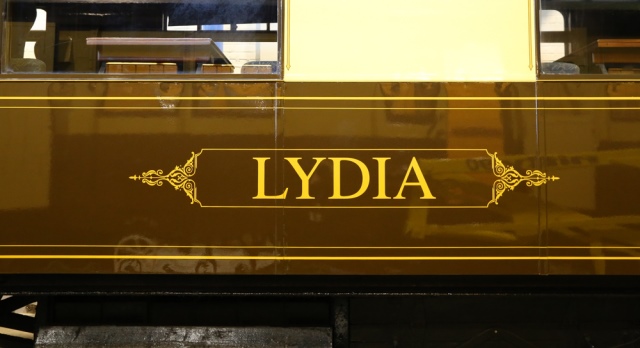 The opening of Churchill’s Final Journey will mark the culmination of a long journey for the Friends of the National Railway Museum who launched an appeal back in January 2011 to raise the money to give the steam icon a new look in time for the 50th anniversary year of the wartime leader’s death.

At the Newman Brothers’ Coffin Works, which re-opened last October as a heritage attraction in Birmingham’s Jewellery Quarter there will be a celebratory event.
Churchill was one of many dignitaries, including Princess Diana, to have their coffins fitted out by Neman Brothers.
“We are incredibly proud that the fittings used on Churchill’s coffin were made at their factory,” said a spokesperson.
Using various rooms of the restored Victorian factory, looking much as they did at the time of the funeral, the evening will include a chance to hear some of Churchill’s most inspiring speeches from 1940, the year that Britain was in greatest threat of invasion from Nazi Germany.
There will be an illustrated presentation on the pageantry of the funeral itself – ‘Operation Hope Not’ – from the lying in state in Westminster Hall, through the service in St. Paul’s Cathedral and the procession of the coffin along the Thames by boat and thence by train to Bladon, near Churchill’s birthplace at Blenheim Palace, where the interment took place in private.
Finally, visitors will have the chance to view examples of the type of coffin furniture used on Churchill’s coffin, which have been recently discovered amongst the huge Newman Brother’s collection.Tickets £7.50, including refreshments Friday 30th January, 7.30pm 0121 233 4790 [email protected]

At the Science Museum Churchill’s Scientists tells the little-known story of how Churchill’s fascination with science led to the scientific achievements that helped Britain win the Second World War.
Discover how the power of science was harnessed during the war, from the recent invention of radar and the production of penicillin and antibiotics, to Britain’s top secret research behind the first atomic bomb. See these incredible events brought to life through a rich array of significant historical objects, original film footage, letters and archive images.
Explore how the culture of scientific achievement fostered by Churchill flourished after the war, invigorating scientific research across a wide range of fields, including molecular genetics, radio astronomy, nuclear power, nerve and brain function and robotics.
The exhibition features a number of personal objects belonging to Churchill, such as the cigar he was smoking in 1951 on the day he learned he'd been re-elected as Prime Minister, and his green velvet ‘siren suit’ – a one-piece outfit devised by him and designed to be put on in a hurry during air raids.
Churchill’s Scientists runs until 1 March.