Commissioned by Bernard Arnault head of the LVMH luxury brand empire and designed by Frank Gehry, the 85-year-old architect whose work includes the Guggenheim Bilbao, the Fondation Louis Vuitton will has set its sights on being associated with artistic creation.

There will be permanent collections made up of works belonging to the Fondation and the Arnault collection, as well as temporary exhibitions and musical events in the auditorium.

The artistic programme will unfold in three successive stages between October 2014 and July 2015, each stage will include a temporary exhibition, a partial presentation of the collection and a series of events. 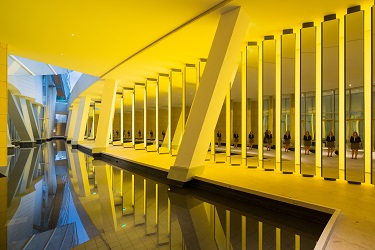 Olafur Eliason – Inside the Horizon. Photograph by Iwan Baan

The first stage – October to December 2014 – invites the public to a ‘voyage of creation’ essentially devoted to the discovery of the architecture of the building with an exhibition on the architecture of Frank Gehry for the Fondation Louis Vuitton.

This exhibition will be presented in dialogue with the first major European retrospective of the work of Frank Gehry, organised simultaneously at the Centre Pompidou.

The auditorium of the Fondation will present several performances most particularly two musical events including a recital by the pianist Lang Lang and a series of eight retrospective concerts by Kraftwerk from 6 to 14 November.