The Olympic Games: Behind the Screen a new exhibition at The Olympic Museum

The Olympic Games: Behind the Screen exhibition explores the history of broadcasting the Games on radio and television, as well as looking at how the Games will be experienced in the future.

This exhibition at The Olympic Museum, which was established in 1993 and houses the largest archive of Olympic Games objects in the world, focuses on the universal dimension of broadcasting from two angles – the new technology used to capture sporting excellence and the creation of emotions made possible by relaying the drama on television and radio.

Coverage of the Olympic Games has constantly evolved over the 120 years of the modern games in order to provide the best experience possible and at London 2012, social media and digital streaming again added new possibilities and dimensions to how we see and hear athletes perform at the highest level.

At the 1924 Paris Olympics, the broadcast coverage consisted of short radio news reports at a time when the medium of television was still in its experimental phases. By 1932, entire events were being broadcast live from the Lake Placid Olympic Games.

Then by 1948, the BBC’s London Olympic radio technology had grown to include eight radio studios and 12 innovative mobile recording cars. Television has followed the same path, each year they adapt and adopt new technology that they believe will provide better coverage for the Olympic audience.

“Prior to the 1936 Olympic Games, one or two cameras were positioned along the field of play and documented the events,” says Matteo Tassi Programme Manager Cultural & Educational Programmes Unit The Olympic Museum.
“Leni Riefenstahl's innovative film coverage of the 1936 Games by covering the Olympics like a feature film radically changed television sports coverage. 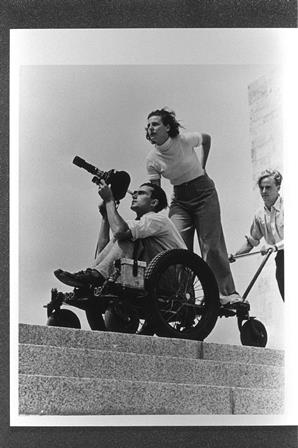 “Using multiple cameras and unique angles, Riefenstahl began the concept of telling the stories of the Games.
“She did not merely document the event; her camera angles showed the audience the games in ways that allowed them to understand the beauty and artistry of sport, perhaps for the first time. “The Olympic Games continues to be a place where broadcasters innovate, experiment and come up with coverage ideas and techniques that are quickly adopted by broadcasters around the world.”

In this section visitors will be transported to London on 29 July 2012, between 3pm and 4 pm and get to experience one hour of broadcasting the Games. They will see the journey taken by the images and sounds of the 20 sports competitions under way at 18 different venues, from the field of play to screens around the world.

Original features reveal the technological skills and creativity of the technicians and those filming on the ground, and the importance of each camera to the narration of the athletes’ performances and emotions.
Two animated films are also shown by Belgian director Denis van Waerebeke, which take visitors into secret places like the outside broadcasting vehicle and the International Broadcasting Centre. Visitors can also test their talent for commentating on a competition at the Games.

“When we started planning the exhibition, we immediately faced a crossroad: should we focus on pure technology, taking our visitors to a very technical territory, or should we have a different look at the Olympic broadcast, more focused on how the emotions are created by media?” says Tassi.

“We decided to mix these two ways, in order to organise an exhibition in a previously unseen way, focusing on viewers’ experience and feelings. That is why the exhibition starts with Olympic athletes telling their first Olympic memory, the ones that inspired them to become Olympians."

“Yesterday is mostly about radio and television, although these two media are still alive! In order to present them, we have chosen the listeners’ point of view.
“In the radio section we narrate the great story of this medium from the 20s until nowadays, highlighting the peculiarity of radio and telling the stories of five great voices that have lighted listeners’ imagination.

“The TV section sums up a century of major innovations, but again we decided not to present a pure technological story, but to link every single improvement in TV broadcast to a change of the viewer’s experience,” says Tassi.

“Colour, satellite coverage, number and positions of camera, replay, 3D: every major improvement has had an impact on how viewers ‘feel’ the Games.”

Today is London 2012, the last edition of the Olympic Summer Games and the day chosen covers 33 competitions from 18 venues.

“To make this journey concrete and understandable, we chose to take the visitors to three different places: first, the field of play, where the images are actually filmed via the most advanced cameras and microphones,” says Tassi.

The variety of coverage at the London 2012 Olympic Games was unpresedented. – © International Olympic Committee. EVANS, Jason

“Then we take them to the International Broadcast Centre, where all the images of the Games converge before being dispatched to the Right Holding Broadcasters; and finally, the broadcaster’s studios, where each commentator add his or her ‘cultural’ mark to ‘translate’ those images, which at the origin are produced by the Olympic Broadcasting Services to be universal and unbiased, to a specific public.

Finally, the exhibition looks ahead to the future of broadcasting. This third part gives visitors a foretaste of the new ways of experiencing the Games live and reveals how the emotions generated by the Games are seen on social media, future image quality and a surprising 360-degree way of filming sport.
The interactive scenography is created by the Paris-based design company Projectiles and takes visitors behind the scenes of broadcasting the Games and the magic of live coverage by using innovative interactive features.

Visitors will have the chance to look to what is already available, 4K technology (or ultra-high definition television) and the Olympic Video Player Application, but also to what might happen in the forthcoming editions of the Games.

“There has not been a major significant development. Instead, each Olympic Games has provided better coverage in incremental steps,” says Tassi.

“The gradual move from short Olympic reports to full live coverage of the Games has been continual.

“Olympic television will continue to innovate and meet the needs of the audience. Online coverage continues to grow in ways that allow the audience more and more access to every Olympic event in real time or delays and more data about each individual athlete.”

Broadcaster are already experimenting with 4K and 8K coverage, 4K/8K 3D coverage, and holographic coverage, which could all be part of our Olympic experiences in years to come.