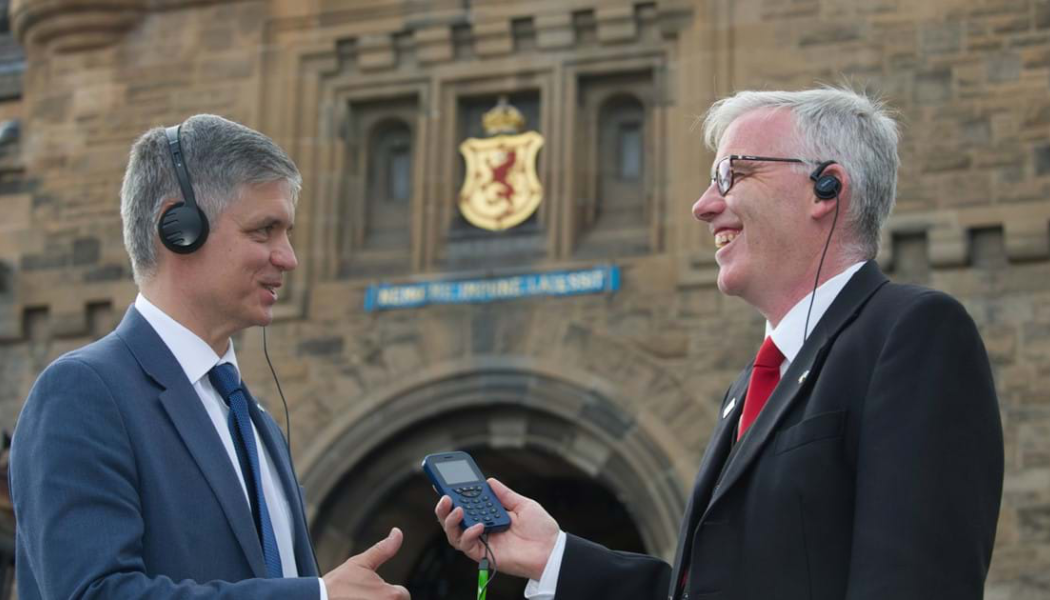 Audio tours will be provided in Ukrainian as part of a wider initiative by Olena Zelenska to bring the language to more famous places.

Edinburgh Castle is now providing audio tours in Ukrainian, as part of a wider initiative by the First Lady of Ukraine, Olena Zelenska, to have the Ukrainian language heard in prominent and famous places around the world.

A delegation from the Ukrainian community including the Deputy Ukrainian Culture Minister, the Ukrainian Ambassador to the UK and his wife, and representatives from the Consulate of Ukraine in Edinburgh, visited Edinburgh Castle to experience and launch the tour.

The launch is part of a cultural diplomacy project, with the First Lady visiting the Tower of London to sign a Memorandum for the launch of a Ukrainian-language audio guide, during an official visit to the UK in October 2020, which was developed and later launched in August 2021.

Ukrainian-language audio guides are now available at museums and royal places at a number of locations, including the Palace of Versailles in France, Charlottenburg Palace in Germany, Vasa Museum in Sweden, Kunst Museum in Switzerland, Dolmabahce Palace in Turkey, and Mount Vernon, (home of George Washington) in the USA.

The Interpretation Team at Historic Environment Scotland (HES) has worked with audio guide contractors ATS Heritage, to produce the audio tour in Ukrainian.

Kit Reid, Head of Experience at Historic Environment Scotland (HES), who runs Edinburgh Castle said: “We were privileged to be approached to host the first audio guide at a Scottish tourist attraction as part of this wider project. This has been in development for some time with discussions taking place before the tragic events which have unfolded in the last six months.

“As we now make this available to visitors to the castle, we were delighted to be able to be joined by representatives from the Ukrainian community to mark this very special and poignant occasion.”

Vadym Prystaiko, Ambassador of Ukraine to the UK said the intention of the guides is to “create new opportunities for Ukrainians who live abroad or travel to other countries, to be able to have, and share experiences in the Ukrainian language.

“It is under such tragic circumstances, that instead, right now, so many of our people are displaced in the world, however in such difficult circumstances many countries around the world, including Scotland, have provided a warm and safe welcome.”

Scottish Government Minister for Refugees Neil Gray said: “I am pleased to see this example of how we can make Ukrainian visitors feel more at home through Scotland’s rich cultural and heritage experiences. As Edinburgh is twinned with Kyiv, it is especially fitting that Edinburgh Castle is the first Scottish heritage site to welcome Ukrainian visitors in this way.”