In partnership with the Ministry of Culture & Tourism in Türkiye and Istanbul Archaeology Museum, the head has been reunited with the rest of the Sidamara sarcophagus for the first time since 1883.

The Head of Eros, a life-sized marble carving dating back to the 3rd century AD, has been returned to Türkiye to be reattached to the famous Sidamara sarcophagus.

The move is part of the V&A’s ‘renewable cultural partnership’ with the Turkish Ministry of Culture and Tourism.

The partnership is the culmination of an initial collaboration dating back to the 1930s, resulting in a joint conservation project between the V&A and Istanbul Archaeological Museums.

The Head of Eros was donated to the museum in 1933 by Marion Wilson, in memory of her father, Sir Charles Wilson, the British military consul general in Anatolia who discovered a Roman sarcophagus at or near the site of the ancient settlement of Sidamaria in Lycaonia (now in Karaman province, Türkiye).

While Wilson’s intention was to ship the sarcophagus to Britain, he took away the head of Eros, which had become detached, placing it on loan at the South Kensington Museum (now the Victoria and Albert Museum) in 1883.

In 1900 the sarcophagus was moved to the Archaeology Museum in Istanbul under the supervision of its director, Osman Hamdi Bey, where it remains on display today. 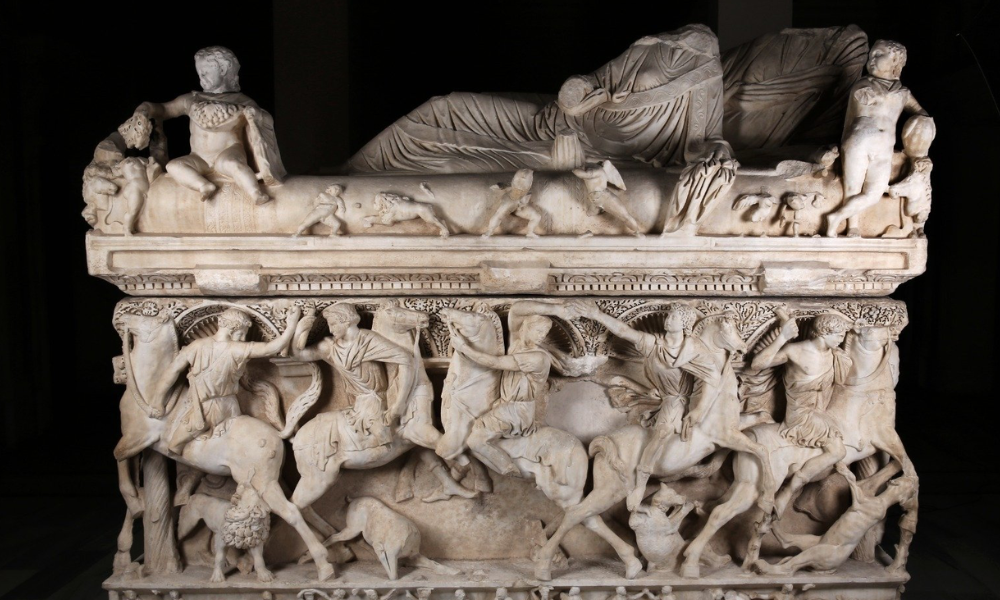 The Sidamara Sarcophagus.(Courtesy of the Ministry of Culture and Tourism)

In 1933 a visitor noticed that the head corresponded in style to the Sidamara Sarcophagus. This prompted staff at the V&A to contact the Istanbul Archaeology Museum and to create a plaster cast of the Head which was sent to Istanbul to determine whether it matched the figure on the sarcophagus. A match was confirmed, and the cast was attached to the sarcophagus where it remained until earlier this month.

Negotiations were renewed in 2010 and since then, conservation teams across both museums have been working on a joint plan to conserve the head and determine how it might be safely reunited with the figure carved onto the sarcophagus.

An initial conservation treatment took place at the V&A in London, where the marble head was cleaned and an old metal dowel was removed, before a team from the V&A flew to Istanbul in June 2022 with the Head of Eros with the support of the Ministry of Foreign Affairs and Turkish Airlines.

In Istanbul both teams worked to remove the existing dowel, replacing it with a stainless steel, adjustable dowel before the marble head was reattached to the sarcophagus.

The Sidamara sarcophagus, now complete after over a century, is currently on display at the Istanbul Archaeological Museum.