Following a national appeal for nominations the Victorian Society has compiled its annual list for 2014 which includes a Grade II* listed church in Hastings facing potential demolition, the huge Tonedale Mill complex in Somerset and Sheffield’s Crimean War Memorial which has been hidden in Council storage for more than a decade. 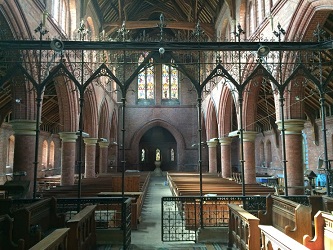 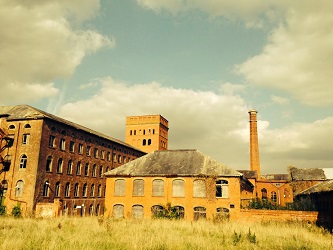 Tonedale Mill, Wellington, Somerset (Continuously enlarged and re-modelled between c.1800 and c.1920, Grade II*)
Plans to redevelop much of the site as housing fell through during the recession, but as the housing market recovers, the mill buildings could now be viable again. 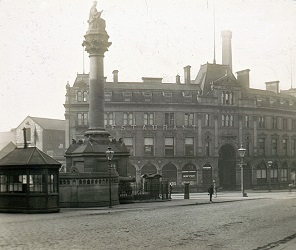 Crimean War Monument, Sheffield, Yorkshire & the Humber (1858, G Goldie, Grade II)
This tribute to Britain’s war dead has been broken up and placed in storage for more than ten years, the column feared lost. The Victorian Society is calling on Sheffield Council to set out its plans in time for Remembrance Day.

Chris Costelloe, Director of the Victorian Society, said: “Once again the number of nominations from the public has demonstrated that it cares about preserving Victorian and Edwardian buildings.

“Those we selected for the Top Ten are those in the most urgent need of help now, but they also illustrate the problems faced by many more buildings around the country.”

The list also includes unusual buildings such as a huge hammerhead crane in Cowes, which gives a glimpse into Cowes’ industrial past, the impressive Coal Exchange in Cardiff, the Grade II* listed Trentham Hall, Navigation Colliery in Crumlin, Greengate Baths, Salford, Abney Park Cemetary Chapel in Stoke Newington and the former Wesleyan Methodist Chapel in Hartlepool. 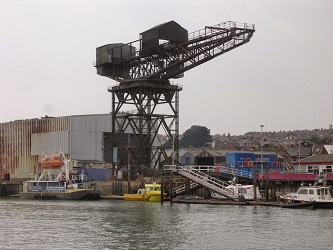 Hammerhead crane, Cowes, Isle of Wight (1912, Babcock and Wilcox, Grade II*)
This giant cantilever crane was installed for the production of naval warships such as HMS Cavalier, which is preserved at Chatham Dockyard. 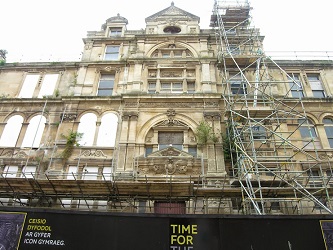 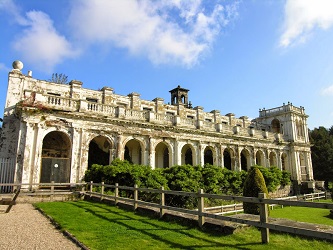 Trentham Hall, near Stoke-on-Trent (1840, Sir Charles Barry, Grade II*)
Once one of England’s grandest country houses, the majority of the Hall was demolished in 1912 due to pollution in the river Trent. The remains give an idea of the Hall’s former glory but are in a very poor state. 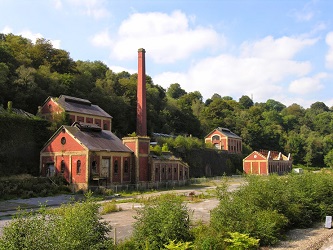 Navigation Colliery, Crumlin, Wales (1907-1911, Partridge Jones and Company, Grade II*/ Grade II)
This nationally important colliery complex was a show-pit of the period but plans to turn the site into a community hub may fail without addressing pollution and a collapsing culvert under the access road. 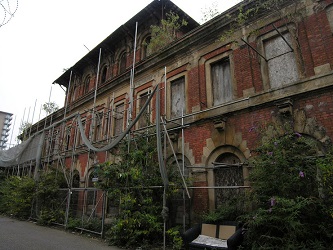 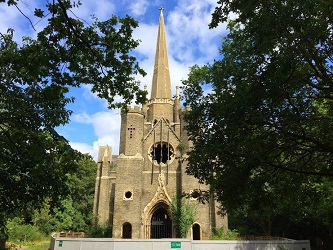 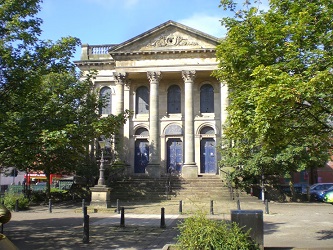 Former Wesley Methodist Chapel, Wesley Square, Hartlepool (1871-73, Hill and Swan, Grade II)
This elegant former Methodist Chapel has been left to deteriorate despite plans for conversion into a hotel.

All the buildings listed are in serious risk of being lost if action is not taken in the immediate future.

The release of the Top Ten Most Endangered Buildings follows the Society’s greatest victory for a number of years when Secretary of State, Eric Pickles, rejected proposals to redevelop much of Smithfield Market in London.

The Society is now calling for the VAT on repairs to privately owned homes to be cut to 5 per cent so that fewer historic buildings fall victim to neglect.

An update on 2013’s Top Ten Most Endangered Buildings:

There was some good news for the Palace Theatre, Swansea when the Council offered a grant of over £70,000 for repair works, subject to the owner obtaining three quotes for having the work carried out. Sadly, the building’s owner has not as yet been able to provide these quotes and the building remains in danger.

There are ongoing negotiations over whether the lease of the Royal Victoria Pavilion in Ramsgate may be taken over by by JD Wetherspoon.

JD Wetherspoon would refurbish the whole building, but do not require occupancy of it all, so approximately a third would be available to let. The terms of a potential lease have no yet been agreed and no planning application has been submitted.

The Jumbo Water Tower in Colchester was reportedly sold at auction earlier this year to a local poultry farmer who intends to create a rooftop restaurant and flats. No planning application has as yet been lodged.

Negotiations are continuing around St John’s Church, Crawshawbooth, Lancashire which had suffered severe water damage as a result of lead theft. Plans have been put forward to convert the Church into a renewable energy centre with the retention of all fixtures and fittings.

Sheffield Council is currently exploring the possibility of selling Heeley Bank School, Sheffield to buyers who would return the building to use as a school. This would be a happy ending for this rare example of pioneering school architect ER Robson’s work outside London.