We will remember them – exhibitions dedicated to First World War

In this period of remembrance and in a year of so many commemorations, military museums and military heritage are to the forefront of our minds.

At the distance of 100 years since it began, we can look back on the First World War with different perspective than those who witnessed the first Armistice could.

In developing two temporary exhibitions this year – for the Fusiliers of Northumberland Museum in Alnwick Castle and for Southend-on-Sea’s Central Museum – PLB has had an enviable opportunity to discover and to share the contributions of the Great War generation.

The Fusilier Museum is home to the collections of the XX Lancashire Fusiliers and the Royal Regiment of Fusiliers and is currently undergoing a £1.4m redevelopment to bring its first floor back into use. 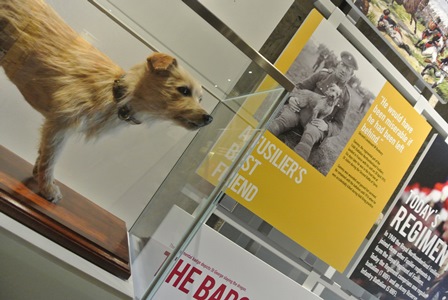 Sammy the regimental pet of the 1/4 Battalion Northumberland Fusiliers who was in the front line during the Second Battle of Ypres, 1915

Together the two collections record more than 300 years of history and heritage of the people who served in the regiments.

Southend-on-Sea Central Museum has created a major new exhibition, Southend and the Great War 1914 – 1918 describing the impact the Great War had on the town including the frontline, the homefront, the defence of the town and borough and its hospitals.

As the first phase of redeveloping the whole of the Northumberland Fusiliers Museum, PLB worked with the client team to create a temporary exhibition for 2014/15.

Using only the ground floor of the museum, but with sympathetic and creative design which will enable reuse of the display structures in the major redevelopment, the exhibition reveals the significant contribution of this regiment to the Great War. 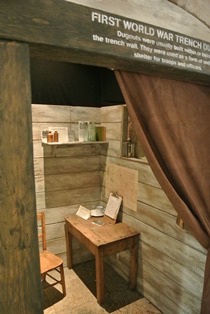 In total 52 battalions of Northumberland Fusiliers were raised, amounting to over 47,000 men, more than any other County regiment outside of London.

A trench dug-out provides a glimpse of life on the front lines, dressed with replica letters and ephemera.

Using the letters and diaries of serving soldiers as well as those who were left at home, there is the opportunity to explore through audio with written transcripts, the real human impacts of the war.

From the gung-ho positivity of the innocent recruit to the reality of the battlefield, several years in, the graphics and emotive audio-visual utilise the men’s real words.

A display of the Victoria Crosses and other campaign medals, along with citations reveal the dedication and strength of character of the Regiment’s men. 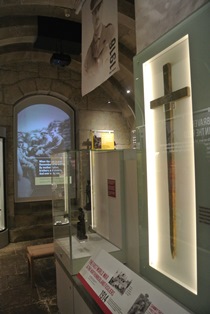 Such character is seen also in those who survived and returned, facing injuries with a degree of humour.

Taking a different slant on the First World War, Southend-on-Sea Borough Council commissioned PLB to develop the design and implement the construction of a temporary exhibition in the Central Museum.

The main focus is on the experience of those at home during the First World War with a brief insight into the part Southend’s men played on the battlefields.

The impact of the war on civilians between 1914 and 1918 is perhaps less well-known than that of the Second World War.

Life during the Blitz is far better documented and taught at schools, as is the Battle of Britain, rationing and evacuees, than the Zeppelin raids which devastated areas of the south coast in particular. 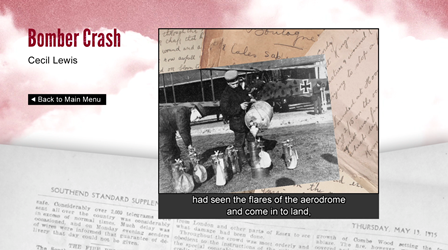 This is also true of the anti-German riots, prompted by suspicion of anyone foreign in the light of the Aliens Act which saw German nationals living in Britain being imprisoned in ships off Southend.

First-hand accounts and period images support the graphics within an audio visual interactive, allowing the visitor to explore individuals’ stories and memories.

The collections provide a very different perspective on war, including Zeppelin fragments, a special policeman’s truncheon, and certificates awarded to those civilians who contributed time and money, raised funds and provided care during the war.

It is a focus on a section of heritage perhaps overlooked when the focus, understandably, is on those who served in the front lines and whose uniforms, ammunition, medals and personal items have survived.

Authenticity and atmosphere: Access and engagement at Audley End House