The prestigious exhibition, organised in partnership with School of Law at Queen’s, and the Journalism, Law and Rights Forum, showcases the most inspiring and high quality photojournalism in the world.

The 2014 exhibition comprises the 150 winning images chosen from over 98,000 images submitted by 5,754 photojournalists in 132 countries.

On display at the exhibition includes the World Press Photo of the Year. This year’s winner, selected by the international jury of the 57th annual World Press Photo Contest, is an image by American photographer John Stanmeyer of the VII Photo Agency. 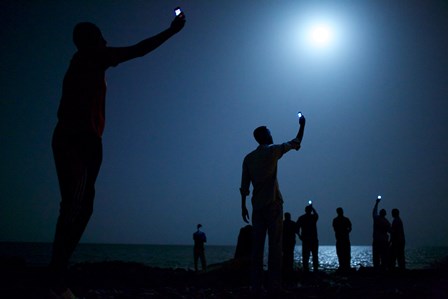 World Press Photo of the Year 2013, John Stanmeyer, USA, for National Geographic shows African migrants on the shore of Djibouti city at night, raising their phones
to get a signal from neighboring Somalia

The picture shows African migrants on the shore of Djibouti city at night, raising their phones in an attempt to capture an inexpensive signal from neighbouring Somalia—a tenuous link to relatives abroad. Djibouti is a common stop-off point for migrants in transit from such countries as Somalia, Ethiopia and Eritrea, seeking a better life in Europe and the Middle East. The picture also won 1st Prize in the Contemporary Issues category, and was shot for National Geographic.

Speaking ahead of the exhibition launch, Head of the School of Law at Queen’s University Belfast, Professor Sally Wheeler, said: “As a truly international University we are absolutely honoured and delighted to host the World Press Photo exhibition at Queen’s. This global event celebrates the best in photo journalism around the world and we look forward to welcoming media and the public from around the world to Belfast and to Queen’s.”

The week-long exhibition will be complemented by a series of evening and weekend events exploring journalism, law and rights.

Award-winning photojournalist, Robin Hammond will explore his work on mental health. Anna Lo MLA, the first ethnic Chinese person elected to a legislative parliament in Europe, will reflect on racism in Northern Ireland, Philippe Sands QC, author of Torture and Lawless World, will speak about developments in international criminal law and Professor Kevin Heller, Human Rights Watch’s external legal advisor on the trial of Saddam Hussein, will be speaking about amnesties.