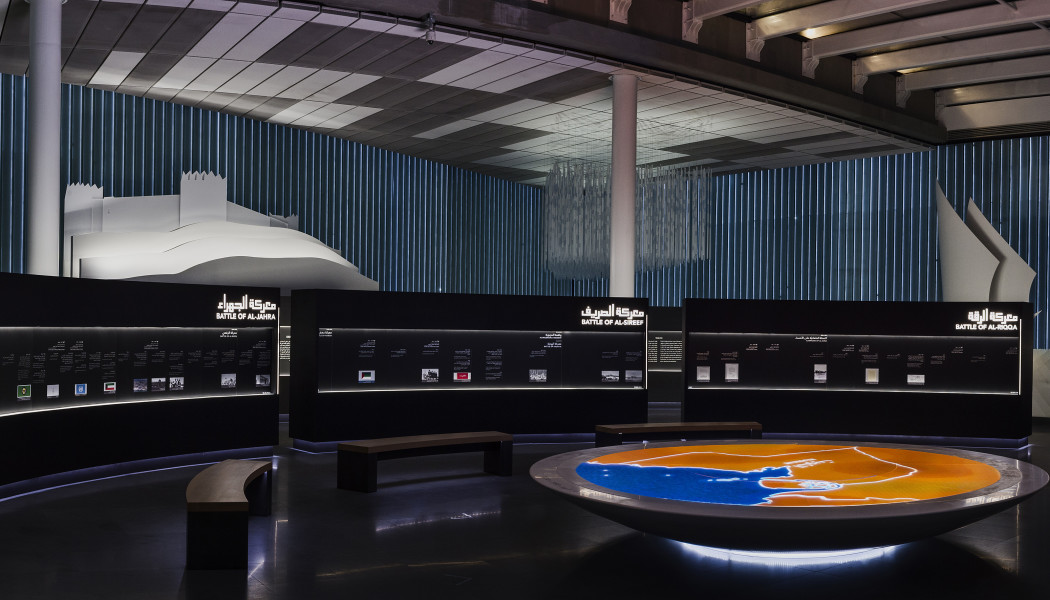 Remembrance Museum, together with the Habitat Museum, have a total exhibition area in excess of 3,400 square metres. APD is responsible for their design development and museographic implementation

ACCIONA Producciones y Diseño (APD) has carried out the design development and museographic implementation of the Remembrance and Habitat Museums, the company’s first project in Kuwait; the museums showcase the history of the country and its natural resources and ecosystems in a permanent exhibition with a total surface area of over 3,400 m2.

APD, based on the design by the US firm Ralph Appelbaum Associates (RAA), has introduced technological innovations to these museums to create interactive and educational environments, dominated by cutting edge audio-visual resources such as large format screens, immersive audio-visual presentations and hyper-realist recreations.

The museums are located within the Al-Shaheed Park, a new natural leisure and cultural centre that is part of the “green belt” connecting old Kuwait City with the new areas of urban development.

A look at history

The Remembrance Museum has a permanent exhibition occupying approximately 900 m2 and showcases the defining moments of Kuwait’s history. It pays tribute to the nation’s heroes and martyrs in an itinerary that covers the key battles that have shaped the country. To this end, ACCIONA Producciones y Diseño has arranged four large-format interactive sculptures using different materials and audio-visual elements, symbolising the four most famous battles of the history of Kuwait.

In the first one, a group of sailing ships represent the battle of Al-Riqqa. In the second, drops of water symbolise the important role played by rain in the battle of Al-Sireef. The third sculpture, the Red Fort, recreates the battle of Al-Jahra using a model of the castle as a pepper ghost. In the fourth and final element, flags of Kuwait’s allies represent the Invasion and Liberation of Kuwait. Visitors can listen to the stories of survivors, veterans, civilians and officers and contribute with their own experiences for future generations by recording their testimony at the “Story Booth” interactive kiosks.

One prominent cutting edge resource in the museum is the “Our Land Map”, a round interactive table with a 4-metre-diametre LED screen where visitors can interact with a map of the region using sensors with dates that are placed throughout its entire surface to reveal key battle locations. Another striking element is the “Our Identity Wall” audio-visual presentation, a wall of twenty four 32” screens showing archive footage and animated images that reflect the values of the people of Kuwait throughout history.

A look at nature

The Habitat Museum seeks to instil in visitors a respect for nature by presenting the wealth and diversity of Kuwaiti habitats through a large number of interactive programmes and scenographic recreations.

Upon entry, visitors receive a Seed Ticket (a ticket with an embedded seed from one of Kuwait’s most characteristic plants) with a chip that provides information on 18 different types of seeds and interacts with all of the multimedia elements in the museum, adapting and customising the visit to each individual.

Among the different resources employed there are some striking scenographic installations showing hyper-realist recreations of Kuwait’s fauna and flora complemented with interactive elements such as the “Migration Corridor”, where visitors use ‘view-scopes’ to contemplate birdlife in its natural habitat; “Landform Tables”, four interactive tables with a total surface of 48 square metres; or the “Terraria Table”, perspex bubbles that recreate small ecosystems of Kuwait’s most important plants.

Other audio-visual resources are the “Prologue” installation, a series of 14 towers with 74 vertical screens in cascade-mode simulating an audio-visual forest with synchronised scenes of Kuwait’s habitats; or the Forces Theatre, a 26-metre-long surrounding audio-visual projection with spectacular panoramic views filmed on location in the country’s natural environments.