A developmental cultural heritage project is exploring the use of 3D technology for the creation of archive materials and to support audience interaction within the museum sector.

The project is financially supported by the Flemish Government, the ‘Duiken in de Machine’ (Diving in the Machine/DIM) project is being led by the Flax Museum ‘Texture’ in Kortrijk, Belgium.

With a focus on industrial and agricultural heritage, in the form of machines, DIM differs both in nature and application from other heritage 3D projects, which tend to focus on the digitising of static, mostly architectural or archaeological, heritage. DIM is exploring the use of 3D technology for capturing detailed archive information and creating materials that can support audience interaction such as
3D visualisations.

The overall objective is to produce a manual of best practice, supporting practitioners when they are deciding whether to scan or not to scan, and then providing guidance on the scanning process.

Offering practical advice, such as how to set up a digitisation project, the manual will also signpost and provide guidance on external resources that may be available such as educational institutions, voluntary organisations and support from the private sector.

In addition to support and guidance in data capture, the manual also aims to collect and include information about the sustainable preservation of digital files. After all, there is little point collecting measurements and producing 3D models and other project deliverables if these are not available for future generations.

The DIM project consists of two distinct phases, the first of which is to explore and prove different digitisation techniques. With knowledge of the potential scope of any data capture (that is the physical scale and complexity of agricultural and industrial machines), DIM explored different options including measuring by hand as well as scanning, laser, CT and x-rays, in order to capture the dimensions of the machine components to add to existing documentation.

For heritage institutions, there are often more complex considerations than just preservation for example, within the museum environment, audience involvement may be a primary goal. The easiest way to include schoolchildren and student groups with digitisation projects is by using simple hand measurements. This type of data capture requires little equipment or training and can produce usable results in short periods of time. However the data lacks accuracy, completeness and can be difficult to process for onward use.

X-Ray and CT scanning can offer a solution for digitising complex machines with hidden or invisible components, providing an idea of what such components look like and how they interact with each other.

During the course of the DIM project, these technologies were explored using a Singer sewing machine consisting of a housing unit made of a thick layer of metal, then a gap, then metal components, then gap, then metal, and so on. The x-ray image was captured from a single fixed point, which unfortunately resulted in distortion, with internal components at a greater angle from the camera, and no sense of depth. The CT scan was also not entirely effective as the machine was too complex and deflection of the x-rays resulted in a lot of scattering in the resulting data.

One example of a successful data capture methodology was the recent laser scanning of a ‘scutching turbine’ – the machine used to process raw flax in preparation for spinning.

Working with RealVisuals, a Belgium based technology company, the turbine was scanned using its Faro Focus 3D scanner, which is designed for use both indoors and outdoors. RealVisuals was able to complete the data capture element of the turbine project in just 90 minutes from 10 fixed locations.

Scanning was undertaken by a single person with no onsite preparation required (using a targetless registration process) and without physical contact with the complex machinery – an important consideration for a museum, where objects are often rare, valuable and delicate or, as in the case of the scutching turbine, potentially hazardous.

Scanning produced a point cloud consisting of almost 90 million individual measurements. This presented the project team with the next challenge: if this vast amount of data could not be converted into a user-friendly 3D format then the scanning of the turbine was somewhat redundant.

The initial requirement from the project team was to create an easy-to-use dynamic model. Practically, this model had to be cost-effective to produce and easily used in different software packages. This was achieved by creating a mesh – a visualisation of the point cloud produced by joining individual point measurements to form triangles. Considered to be an entry level output, the mesh was the logical first step for the scan data.

Reverse engineering, based on laser scanned data, was also used to create a dynamic model from the point cloud and then prepare it for other uses such as 3D printing, creation of a textured model, adding measurements and preparation of technical drawings. Although potentially a more useful process this was also a more expensive option, since it required specialist software and knowledge and took longer.

The final outputs – animations, technical plans, 3D print, Google Cardboard and so on – were almost the ‘icing on the cake’. Instead, it was the definition of the workflow and the knowledge that these could be created that was essential to the success of the project.

Having worked with the UK-based Arithmetica before, RealVisuals was familiar with the Pointfuse modelling engine. Pointfuse provides a fast, precise and flexible way of converting the vast point clouds generated by laser scanners or photogrammetry into high fidelity vector models.

Designed for architects, engineers and construction professionals, Pointfuse is intended to be a ‘one button’ conversion utility requiring only x-y-z information to automatically convert points to vector models. Registration of the scan data is usually performed before import; after import, the data is converted to Pointfuse’s proprietary point cloud format, allowing the user to visualise and manipulate the billions of points without compromising data integrity or performance.

Pointfuse uses a series of advanced statistical techniques including a patent pending algorithm that identifies and fits the ‘best’ planar surface through points, creating a series of surfaces that intersect to provide a 3D representation of the original data. If the point cloud data contains additional information, such as RGB imagery or intensity data, this can be used to texture the planar surface.

Using Pointfuse, the 90 million points of the turbine dataset were converted to a 3D vector model in just four minutes using a standard laptop with 16GB of RAM. The photorealistic textured model was then exported to the Collada (Collaborative Design Activity) format, an open standard XML schema and interchange file format for 3D applications. 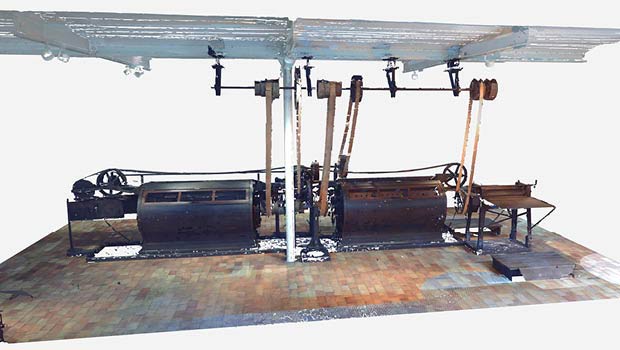 Results from this phase of the DIM project are largely explorative and the resulting models were not created with the intention of end use by the museum. However, the acquired data together with the Pointfuse models will be used for analysing sustainable preservation in the second phase of the project. This will also be used to make informed decisions about the wider deployment of laser scanning and the applications of 3D models, visualisations and animations in the museum.

During the second phase of the DIM project, the organisers are keen to explore the lessons learnt to date, applying both the innovative techniques and knowledge to other heritage applications. The project team are also keen to further explore the application of laser scanning for machine interiors.

Once completed, the project results will be published and will include a manual specifically aimed at the heritage sector to include a roadmap of digitisation techniques, technical details on different types of (3D) technology that can be used, and several case studies to back up the more technical information published. It is hoped that by exploring different options – including ‘Why do you want to digitise?’, ‘What information do you already have?’ and ‘What are the subject parameters?’ – the results of the DIM project can help the heritage sector make informed decisions when it comes to the digitisation of artefacts.