A 360 degree video recording system from Arithmetica has been used to document an award winning heritage railway and popular tourist attraction in Wales.

The Spherevision recording system, operated by specialist production company TX, used 360 degree spherical cameras mounted in various positions on a railway locomotive travelling the 25 mile course of the Welsh Highland Railway. During three days of filming multiple views of the journey from Porthmadog to Caernarfon were captured and then processed using Spherevision software. The resulting interactive DVD is now available to purchase from Amazon or as a download as an app.

“The Welsh Highland Railway offered an unrivalled opportunity to demonstrate the capability of the Spherevision 360 video recording and playback solution,” said Tracey Manasseh a specialist 360 producer working with Spherevision. “With some of the most beautiful sites in the UK the multifaceted experience allows the viewer to experience the journey from every possible aspect. From riding the footplate to sitting trackside, the interactive DVD allows you jump to any party of the journey; zooming in and out and panning around the captured scenes as if you were there.” 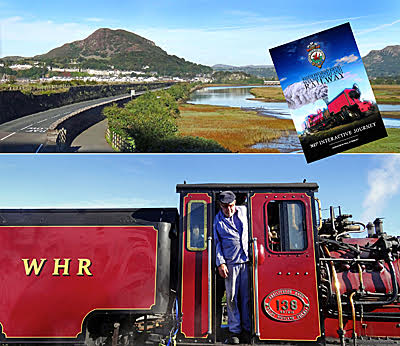 During three days of on-site filming a number of 360 degree spherical cameras were mounted on the Welsh Highland Railways Beyer Garratt 138 steam locomotive. Views from inside the cab and carriages were complemented with 360 degree images from alongside the front wheels, on the locomotive’s footplate, on top of the engine as well as trackside views and recording from bridges. The recorded footage was processed using Spherevision software to create a fully interactive digital experience which allows users to play and interact with the 360 degree video experiencing all aspects of the scenic journey.

The ‘Welsh Highland Railway – 360 Interactive Journey’ is available to purchase as a two disc boxed set DVD from Amazon or to download as an Android app from play.google.com. The second disc provides a non-interactive Director’s view of the journey suitable for use in any standard DVD player. Online reviews include ‘Watched it again and again – always something new to spot’ and ‘It was interesting to be able to switch views at will and commend the railway for the idea. Well worth the money’.

“The Spherevision 360 video recording and playback system is easy to use from onsite filming to the end user sitting at their computer,” continued Manasseh. “It has enormous potential for a range of applications beyond the tourism and heritage markets including security, site management, risk assessment as well as health and safety management and training.”