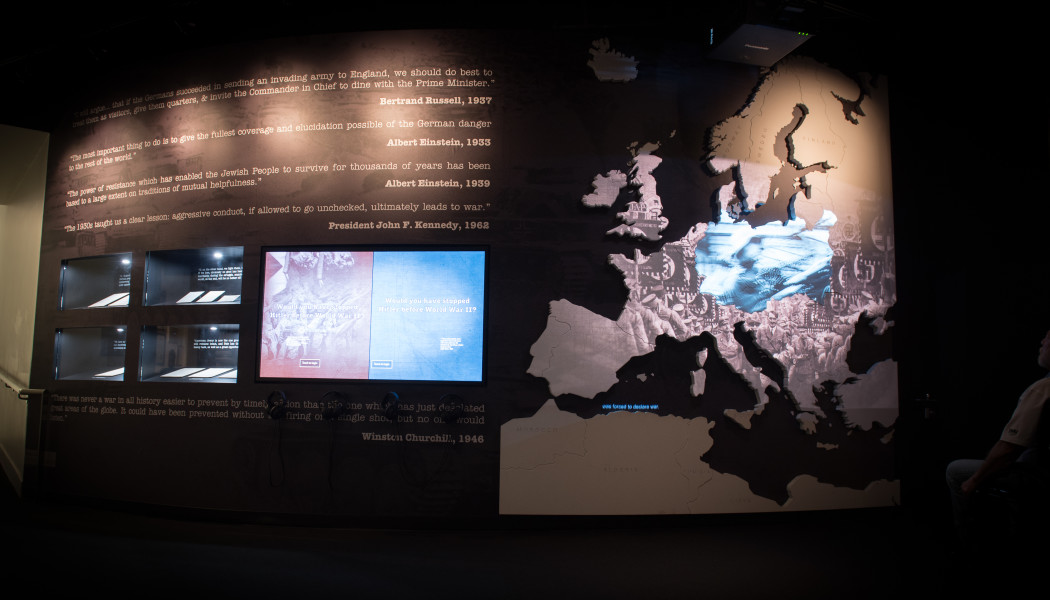 Electrosonic returned to long-time client recently when it designed and installed a permanent exhibit exploring Allied appeasement prior to World War II for The Museum of Tolerance in Los Angeles.

The dynamic new multimedia presentation uses letters, archival footage, speeches and interactives, to explore how the political decisions made by Allied leaders in the years leading up to the war made Hitler’s rise to power possible.

The Appeasement exhibit is housed in the main exhibition space at the museum opposite the display containing the original Vienna office of Simon Wiesenthal and an exhibit honouring Pope John Paul II and his solidarity with world Jewry. Electrosonic was challenged to fast-track the project in a tight time frame; part of the work was completed while the museum was open to the public.

The Appeasement exhibit’s main feature is a giant relief map of Europe, which spans a curved wall, and its companion touch monitors. “A Panasonic PT-DZ870LK ultra-short throw projector makes the map come alive with video images of the war’s progression as it highlights how territories and borders morphed when World War II got underway and armies advanced,” says Electrosonic project manager Steve Calver.

The projector is mounted on the ceiling about two feet away from the map, which is covered with a slightly reflective projection surface. A 7thSense server warps the images onto the map which was created by Cortina Productions. A Dakota Audio ceiling speaker is mounted above the map to provide a narrowly directed audio field.

“Videos pop up and go away, arrows move, armies march – the display is constantly dynamic,” says Calver. “With the ultra-short throw projector, you get a large projected image that people can stand much closer to than with traditional projection lenses without interfering with the projection envelope and creating shadows. In this specific application, the projector was a less expensive and more aesthetically appealing choice when compared to a custom surface mounted LED wall.”

Adjacent to the map is a single Planar 70-inch multi-touch monitor, which enables up to four visitors to drill down and learn more about the subject.  Headphones by the monitor allows visitors to listen to the specific content they are viewing. NLE computers drive the interactive content.

Electrosonic added hardware to the equipment rack in the Wiesenthal office and added programming for the new show to its ESCAN control software profile without disrupting existing playback for the other exhibits in the main space.

Electrosonic was also tasked with replacing all 24 of the museum’s card reader CRT monitors with new 21.5-inch NEC LCD monitors. Upon entering the museum, each visitor receives a photo passport card with the story of a person whose life was changed by the events of the Holocaust. At one other location, the card provides additional information about that person as the war progressed and a printout at the final station.

Yazdani Studio of CannonDesign was the architect. Cortina Productions was the film and interactives producer. Coastal served as the general contractor for the new exhibit; the museum has a service contract with Electronic for technical maintenance.