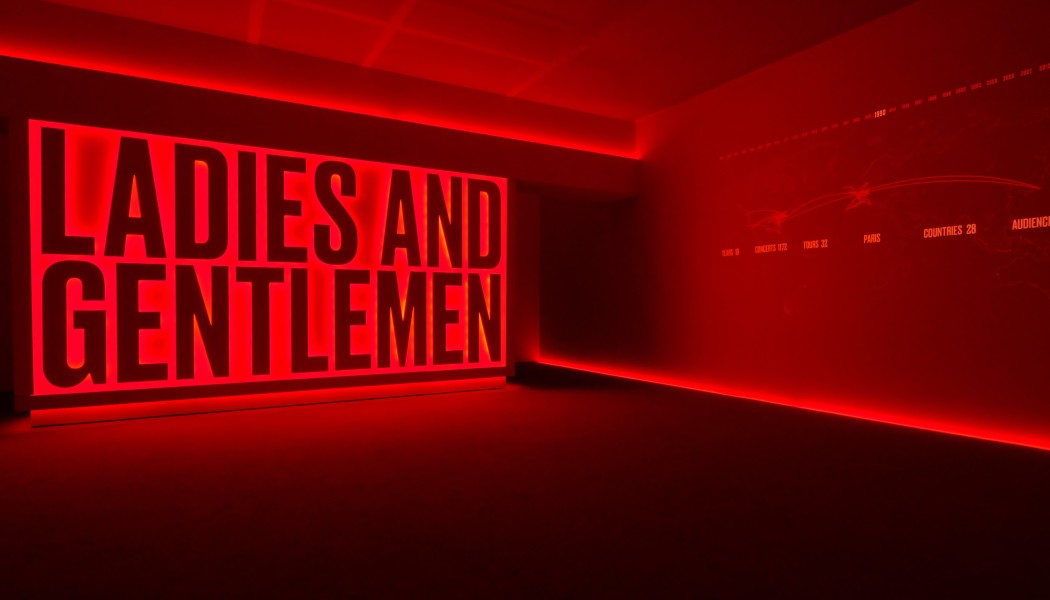 Electrosonic has provided audio-visual systems integration for Exhibitionism – the first ever major exhibition by the Rolling Stones. Featuring nine galleries, each with innovative audio-visual technologies. Exhibitionism is the largest touring exhibition of its kind ever to be staged by any band or artist. Installed in just three weeks, nearly 70 screens, stunning projection and a powerful audio system help to depict the Stones’ 50 year and counting career in this unique and interactive experience.

Exhibitionism, produced by International Entertainment Consulting (iEC) and delivered by DHL, explores every facet of the Rolling Stones, from their creation right up until today. Highlights include artwork from across the decades, clothing, performances, instruments, recordings, unseen films, photos and entire rooms of rare and beautiful objects.

Throughout the nine galleries, audio-visual technologies help to enhance the sensational exhibits and effectively portray diverse and iconic moments in the band’s history. There is even a reconstruction of their first flat at Edith Grove in London, where audio helps to convey the conditions that they endured in 1962.

“Electrosonic showed great commitment and dedication to meet the challenge of the three-week installation period. We were very happy with the skillset and the efficiency of on-site leads and the installation team.” Ki McGinty, Project Manager, iEC.

Electrosonic was appointed to engineer and deliver the complete audio-visual installation under direct contract with iEC, in a very short time frame of just three weeks. London based Fray Studio produced the video content and specified the show system. The vast range of innovative technologies employed excite and immerse visitors in the sights, sounds and exhilaration of the Stones. For the visiting fans, passionate and euphoric memories and emotions are most certainly evoked. 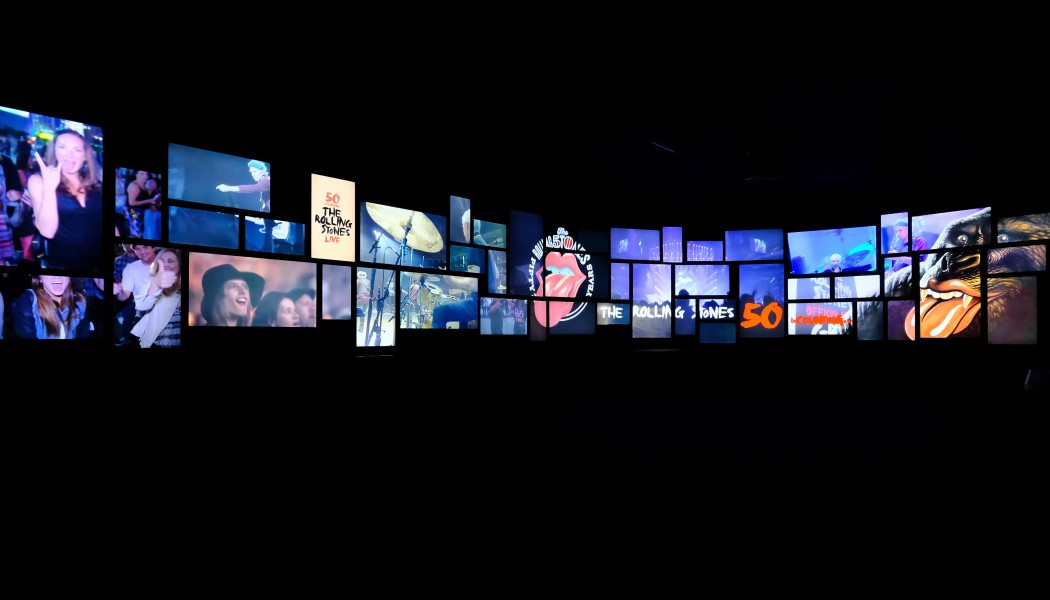 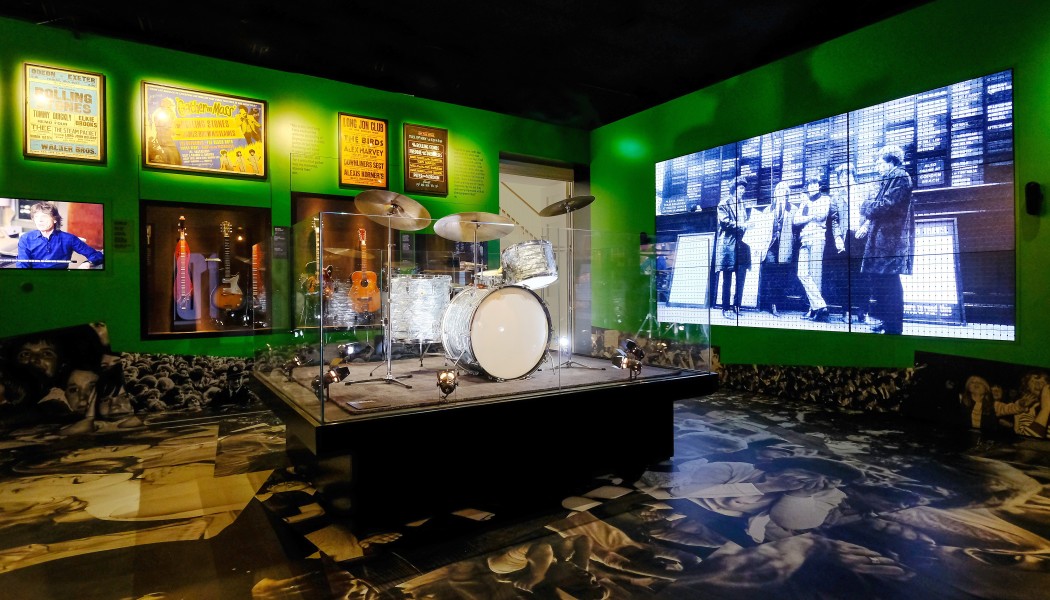 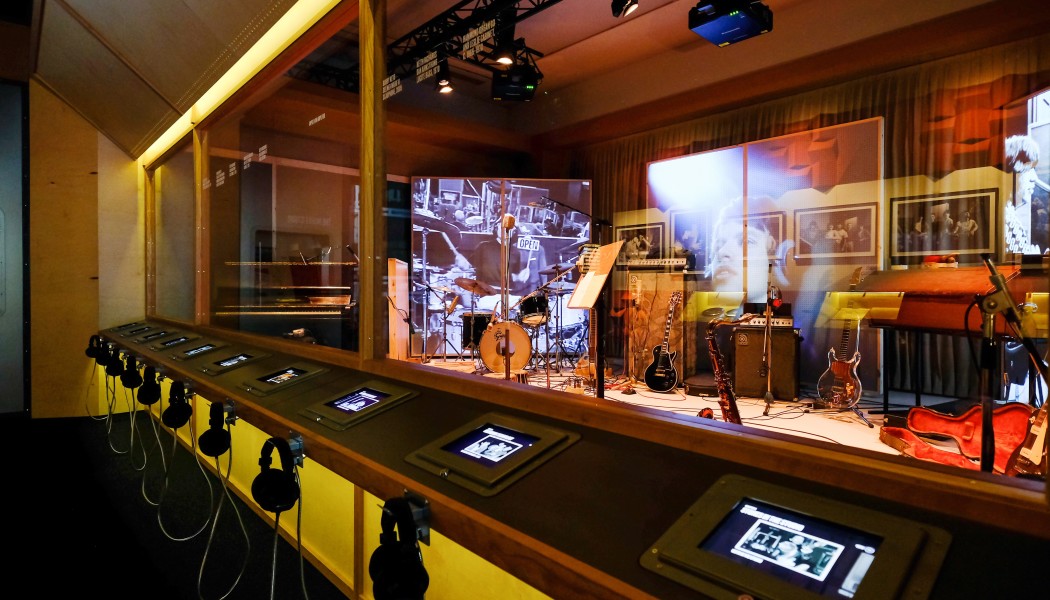 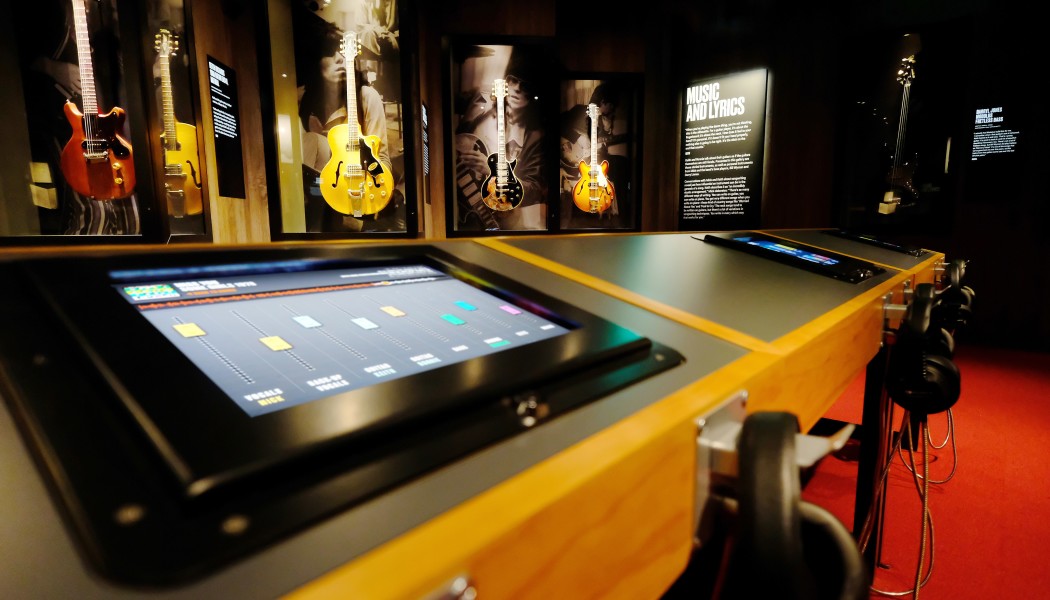 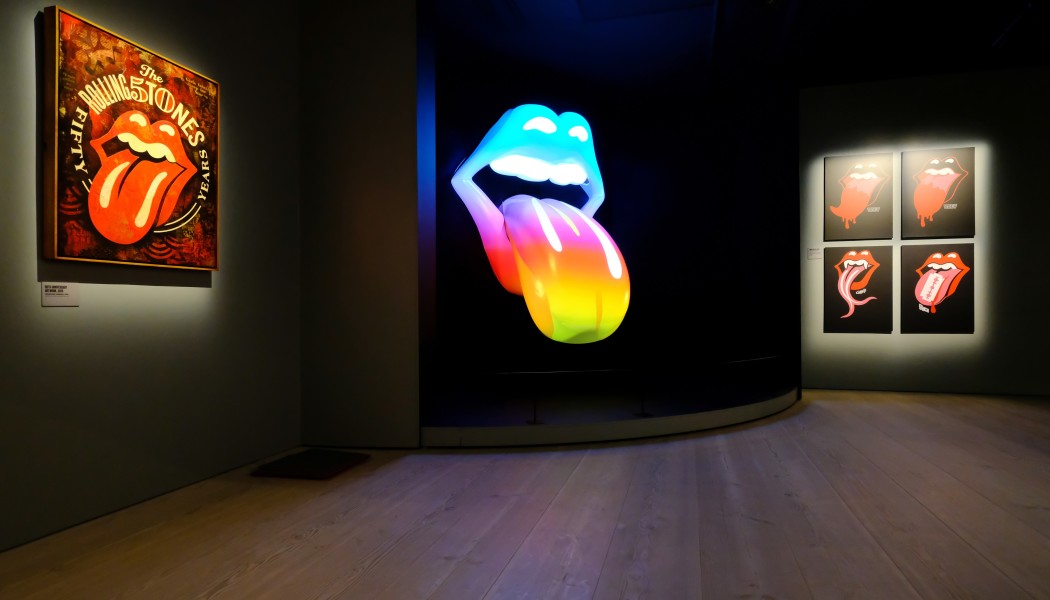 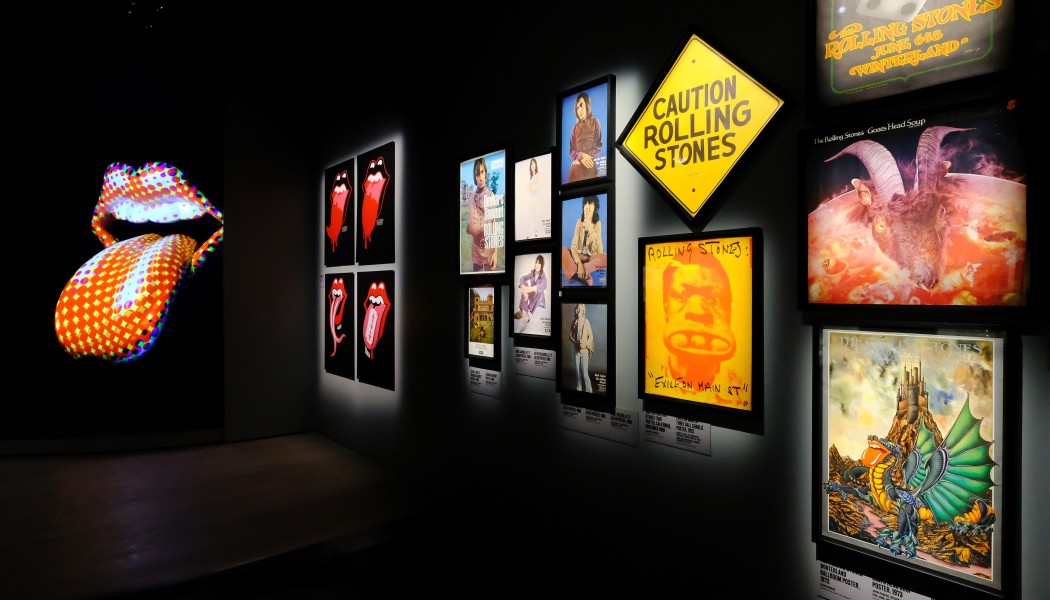 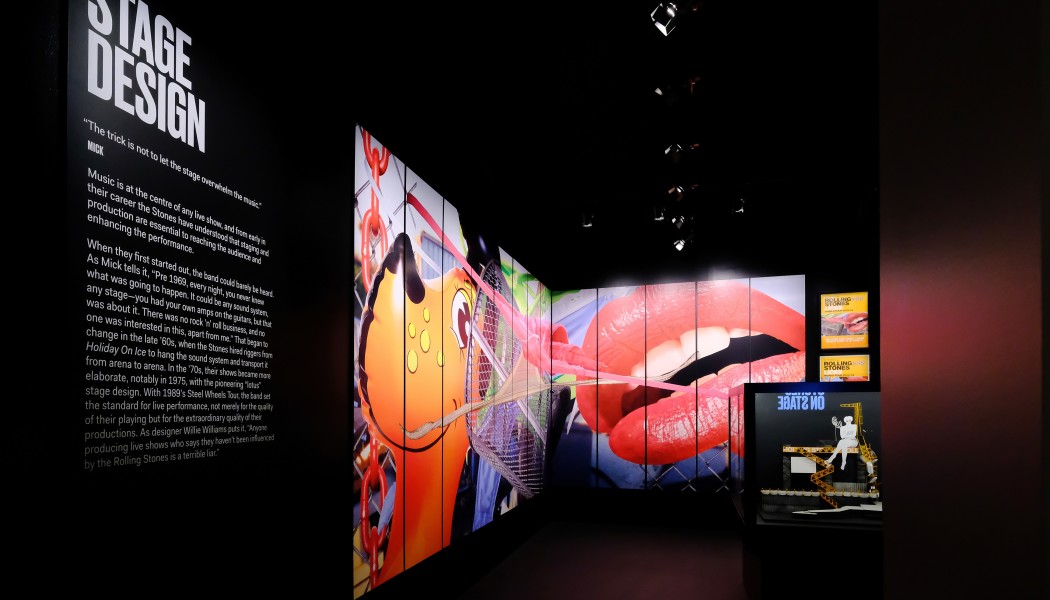 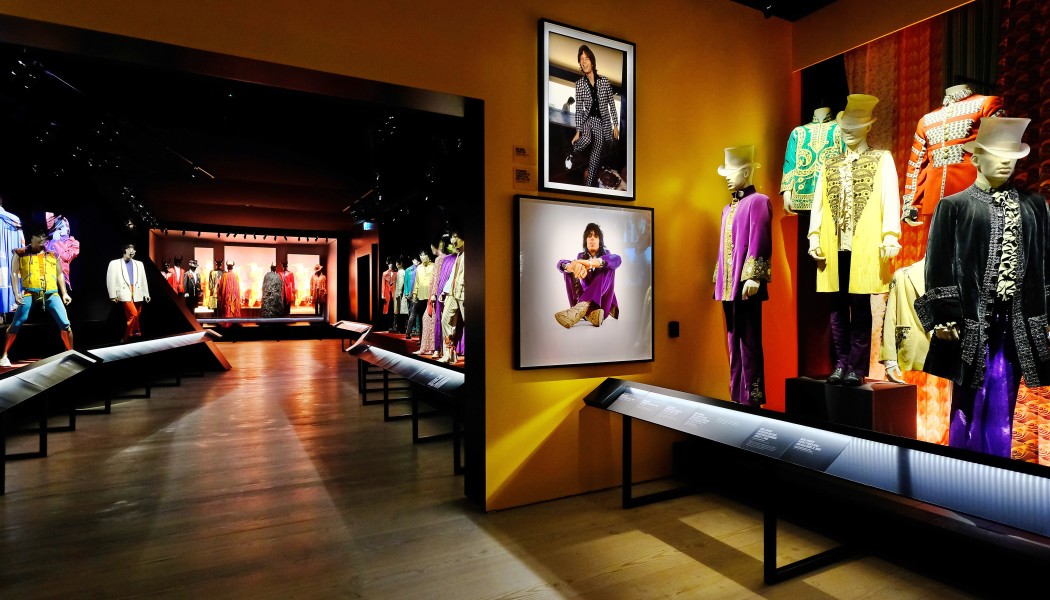 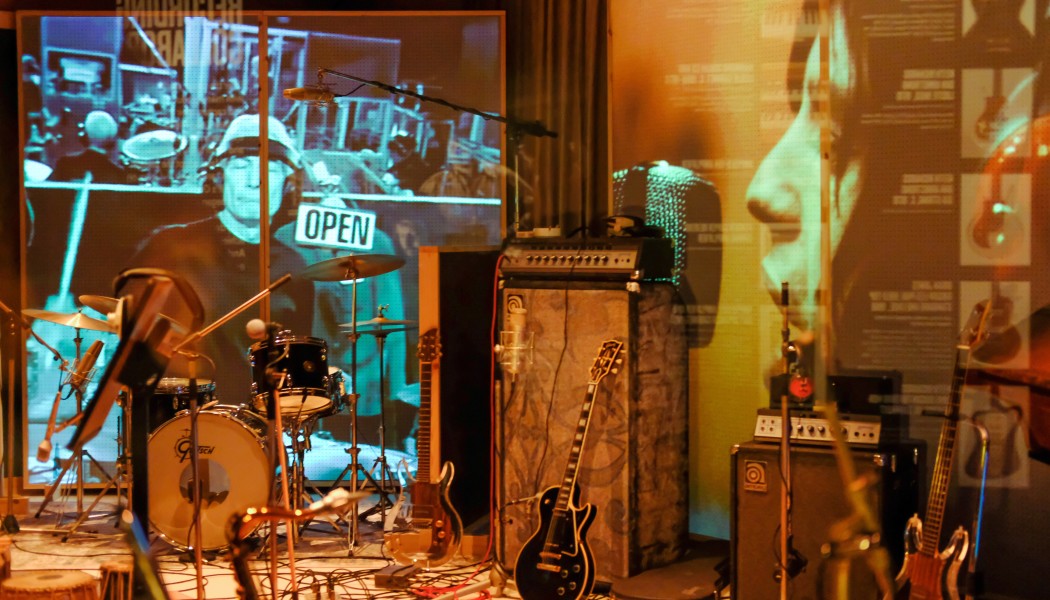 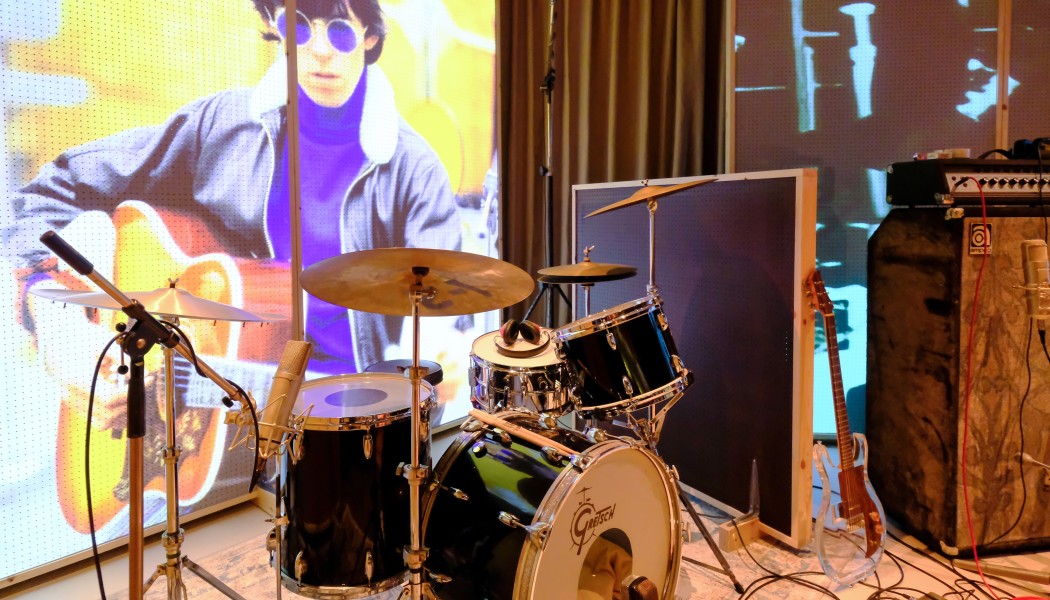 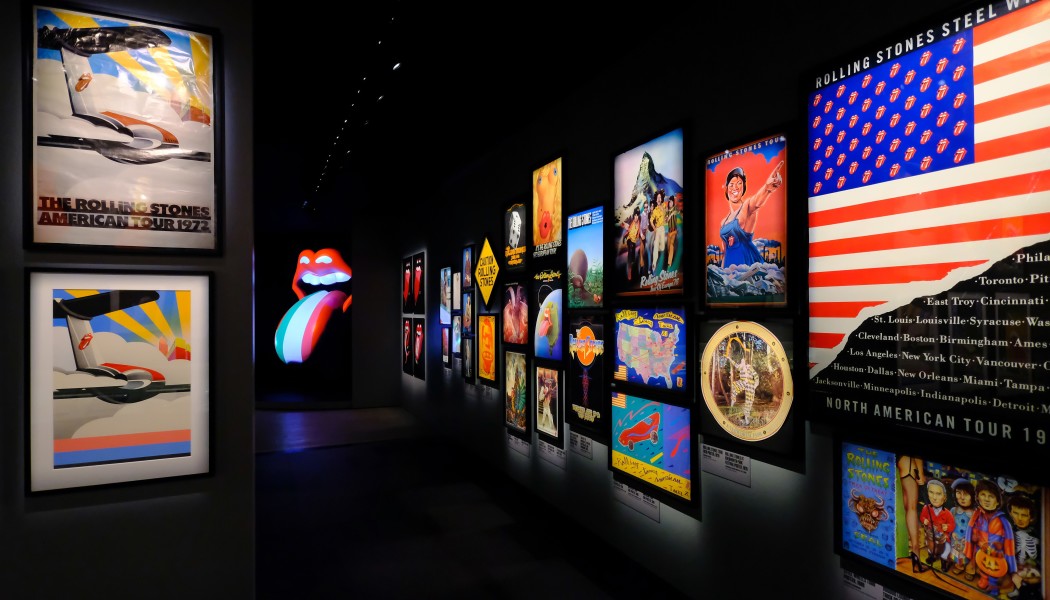 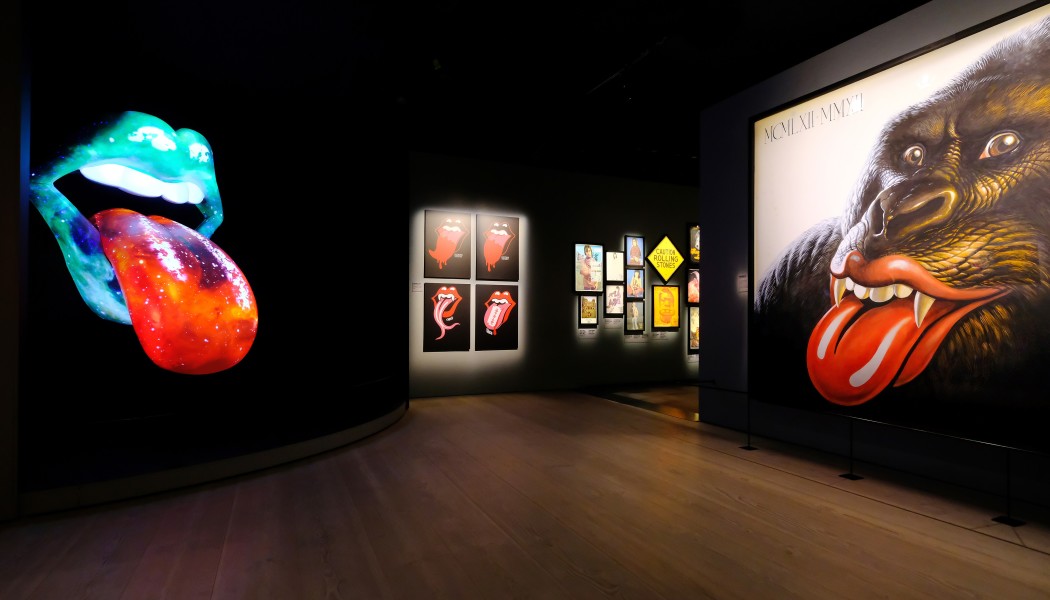 One of the galleries consists of a spectacular display of 50 LCD screens, of different orientation and sizes, which immerse visitors in a fast-paced film exploring significant moments in the Stones’ history. Guests see a variety of absorbing film footage and images from concerts, news clips and newspapers, shown on individual or over a range of screens. Overall, Electrosonic installed nearly 70 LCDs throughout Exhibitionism. LED walls are also used as a backdrop for an extensive range of sensational designer clothes, enhancing the visitor’s visual experience and impact.

The Rolling Stones’ iconic tongue and lips logo is recreated into a 2.5-metre wide, three-dimensional model for a projection mapped presentation. The giant sculpture, created by Paragon Creative is transformed into an entrancing display of flags and mesmerising colours and images. Four Panasonic 3000 Lumen ‘Solid Shine’ projectors and one 6500 Lumen single chip projector are required to give complete coverage of the model, along with a 7thSense 6-channel server.

The “Recording” gallery shows a studio set-up and makes effective use of floor to ceiling projection. One viewpoint is served by ten interactive stations equipped with BlackBox headphones and Apple iPads to allow visitors to select and listen to recordings of the time. A second interactive exhibit “Music and Lyrics” with eight stations, allows visitors to experiment with the way classic Rolling Stones tracks were mixed. Visitors can adjust the levels of vocals, drums and other instrumental elements that construct their songs.

The exhibition ends with a recreation of the band’s backstage environment which then leads visitors into a highly immersive 3D experience. Visitors are engulfed with excitement as they see the Rolling Stones perform ‘(I Can’t Get No) Satisfaction’ live at Hyde Park. The 3D, never seen before show, makes visitors feel as though they are in the audience watching the Stones perform, making for an impressive climax to the exhibition.

The 3D production is run from a 7thSense Delta Duo server and utilises 3-chip, 12,000 Lumen DLP projectors from Panasonic, fitted with polarizing filters and mounted in a custom rigging frame to allow double stacking. The polarization preserving screen is from Harkness Hall. Viewing glasses are from RealD.

Audio plays a significant role throughout the exhibition, particularly in the opening show and the finale. In the first case, Electrosonic installed a JoeCo BBp1P multi-channel digital audio player, fed to a Behringer X32 rack mounted digital mixer. A Behringer X32 is used for the finale but here the source is from the media server. Power amplifiers and loudspeakers from KV2 are employed in both cases to really capture the high intensity of the fans and the music from the Rolling Stones.

“The end result was a great success. Electrosonic met the requirements of both the project and iEC to deliver effective and robust audio-visual systems integration.” Ki McGinty, Project Manager, iEC.

The exhibition is currently located at the Saatchi Gallery in London until September 4, 2016. It is then set to embark on a world tour of eleven cities over four years.