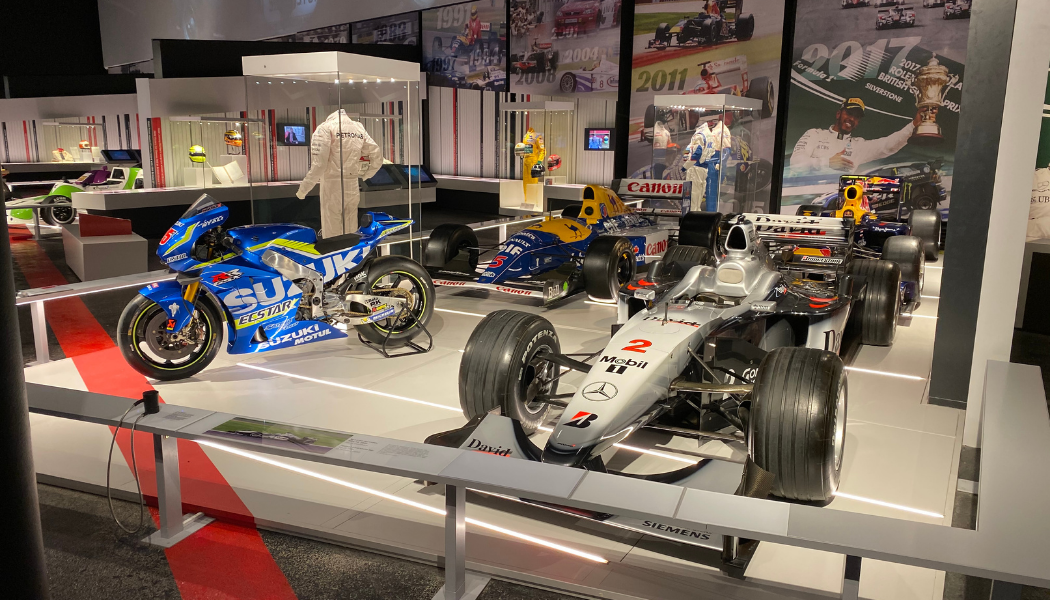 Elmwood look back on a high-octane project at Silverstone

Elmwood Projects reflects on its largest and most complex project delivered to date – the £5.5m Silverstone Interactive Museum Fit Out project at Silverstone in Northamptonshire.

After a tumultuous 18 months, Elmwood Projects are reflecting on their largest and most complex project delivered to date – the £5.5m Silverstone Interactive Museum Fit Out project at Silverstone in Northamptonshire. Elmwood were delighted and proud to hand over the completed Visitor Experience, designed by Mather & Co, to a very satisfied client two years ago in October of 2019, and to attend the Royal opening by Prince Harry and Lewis Hamilton in March 2020.

In its first months, the attraction welcomed huge numbers of visitors and hosted numerous events including a children’s School of Motor Racing in February 2020 with a Scalextric Grand Prix and F1 and off-road simulators. However, when the pandemic hit, along with Museum and Heritage institutions across the country and the globe, Silverstone was forced to close its doors in March of 2020.

As a consequence, the race track missed out on the British round of MotoGP motorcycling Championship in summer of 2020 due to the pandemic, however was able to host the British Grand Prix in August 2020, won by Lewis Hamilton, albeit without the usual crowds of enthusiastic spectators.

In September 2020 the Silverstone Interactive Museum was, once again, able to welcome in the public, with stringent social distancing and sanitising measures in place – with an outdoor Heritage Track Trail of the original Grand Prix circuit, the Ferrari Challenge UK and the British Touring Car Championship.

In October 2020 the Museum was awarded a grant of £572k from the Culture Recovery Fund; a welcome and vital support which enabled the museum to protect jobs, maintain its historic collection, and prepare to reopen in what had become a wholly different climate for the Museum & Heritage sector.

The Silverstone Interactive Museum fully reopened again in May 2021 and, over the Summer, the attraction has hosted an exciting and dynamic events programme of the kind first envisaged when the extensive renewal project of this much-loved historical venue was embarked upon.

Elmwood’s Fit out project was a true labour of love for their team, many of whom have a lifelong love of cars and motor racing and all of whom put their utmost into delivering a truly world-class visitor attraction befitting its venerated history. As Main Fit Out Contractor, Elmwood manufactured & installed all Setworks and metalwork items for the First Floor, Ground Floor, Atrium and External areas of the Exhibition and as a simultaneous project also delivered the Fit Out of the Management offices and Retail space.

A complex array of integrating packages was also managed and coordinated as part of the Fit out, from Graphics, AV, Display Cases and Mounts, to purpose built plinths to support original racing vehicles which allowed flexibility for them to be moved and reconfigured in the future.

Interactives for the attraction were provided by Elmwood Projects’ specialist supply chain partners which collaborated closely with Elmwood and the Silverstone team from the early Design phases of the project to ensure the finished results fully met expectations of knowledgeable and informed visitors.

The building itself was in fact a former World War II RAF hangar – onto which a new modern entrance space was constructed. On display in the entrance atrium is a suspended F1 car above the ticket desk as the visitor’s first welcoming glimpse of what is a massive collection of artefacts. 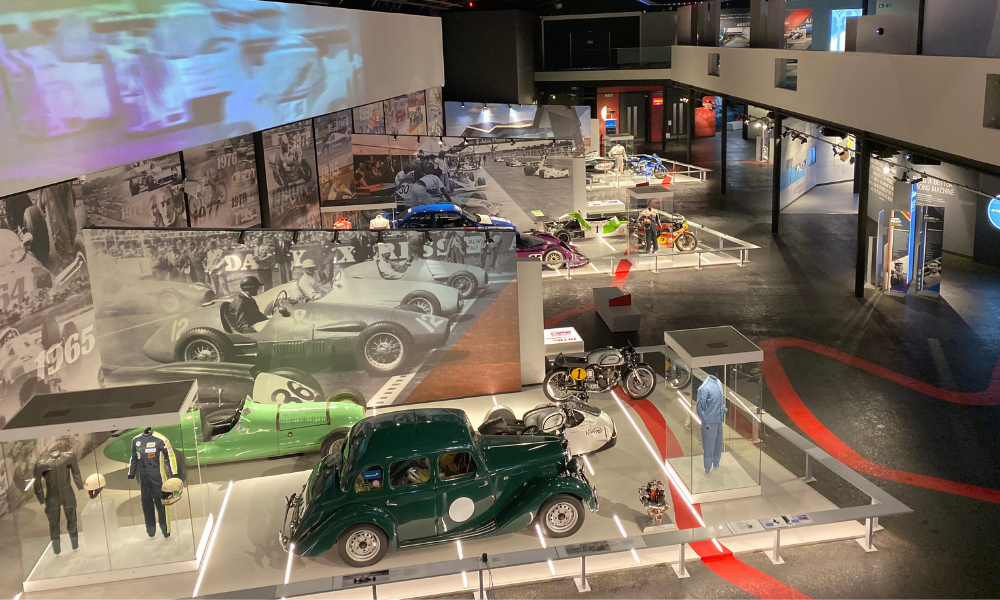 The magnitude of the project required meticulous planning by Elmwood from the initial receipt of the concept design, through a technical design development phase, coordination of all subcontracted packages, manufacture of all elements to the on-site delivery. This, combined with the fact that there was an overrun of the base build works, meant Elmwood’s Project Manager had to show flexibility and manoeuvrability on- site to allow the base build contractor to continue to work alongside the fit-out works.

In an alarming setback for the project, the Base Build contractor was subsequently put into administration, however Elmwood have knowledge and experience in this area and so were able to plan and deliver the remainder of the Base Build works for the client, resulting in only a week’s downtime from the collapse of the main contractor to works recommencing.

The range of spaces and exhibits include the historical and informative, telling the visitor the history of how Silverstone came to be such a special and significant venue, and over 60 hands-on and fun interactives. Visitors can try operating a replica pit gun, commentating on a race and taking part in the Ultimate Lap experience – an exhilarating virtual trip around the Silverstone circuit that recreates the feeling of driving a F1 car in a fully immersive simulator. As well as a hands-on experience which recreates the thrill of motor racing and high-speed adventures for kids and adults alike, visitors can see legendary race cars in person, including those driven by Lewis Hamilton, Nigel Mansell and Stirling Moss. 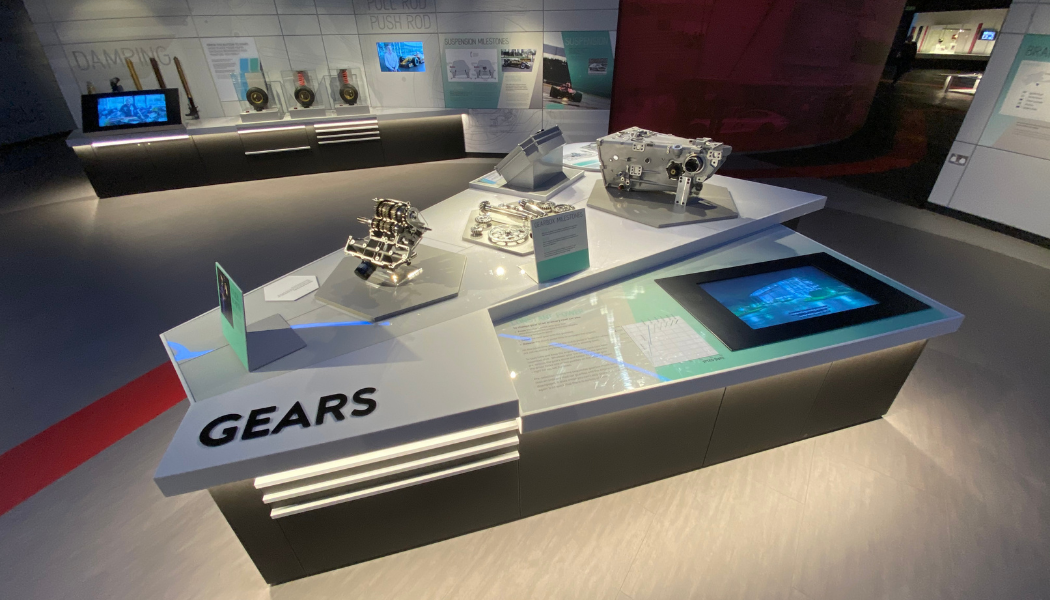 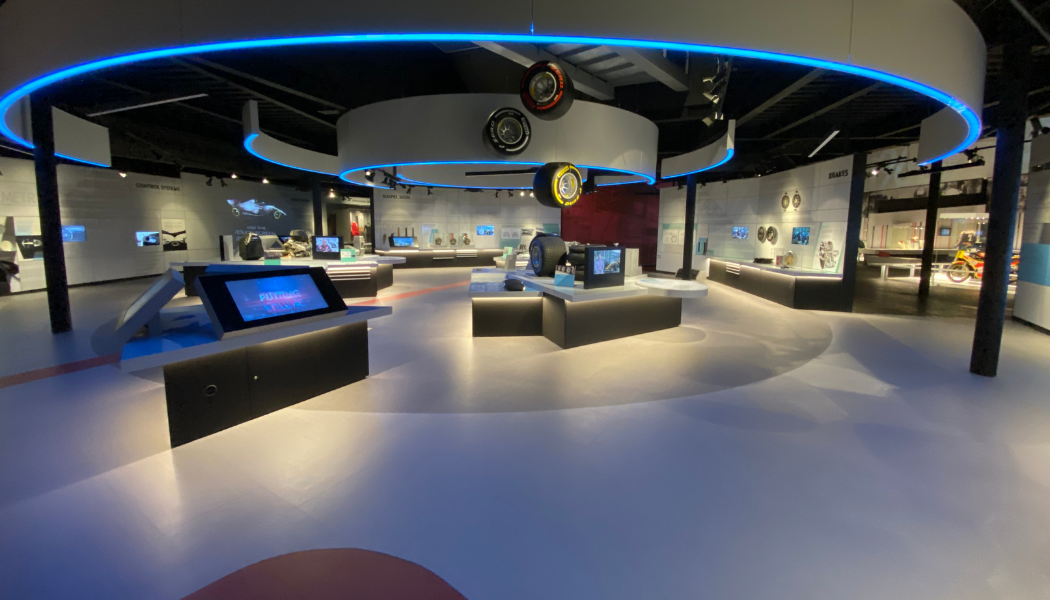