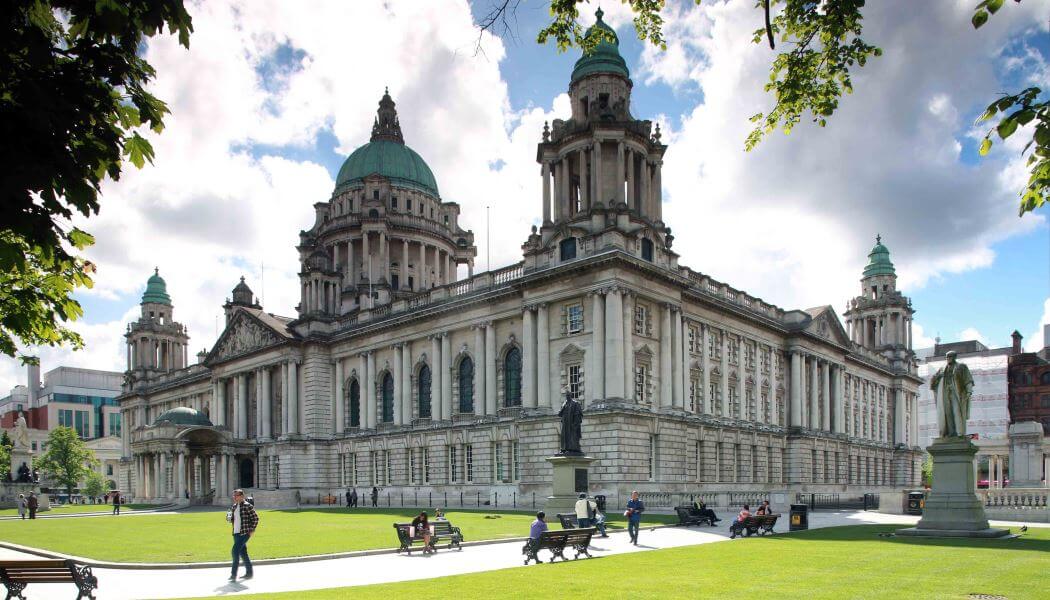 The new visitor attraction at Belfast City Hall charts the history of Belfast from a quiet hamlet to the vibrant, innovative, attractive city it is today and was officially opened by the Lord Mayor, Alderman Brian Kingston

This self-guided visitor exhibition takes up the ground floor of the City Hall’s east wing fulfilling the council’s ambition to make the building more inclusive and welcoming. It also contributes to the council’s Belfast Agenda putting good relations front and centre of city centre regeneration.

Marcon worked with interpretive designers Redhead Exhibitions to transform the space into a modern exhibition. The design allows visitors to interact with the rich cultural heritage of Belfast and facilitate the effective and efficient flow of people throughout the space, which includes the new exhibition, the official guided tour, the stained glass window collection and the memorial grounds.

Marcon completed the fit-out of the 16 rooms and was responsible for the installation of all of specialist joinery and fitted furniture, feature display cases to house artefacts, exhibition graphics and illuminated signage within the exhibition.

“The fit-out of the new exhibition at Belfast City Hall was a challenging and rewarding project. It is not every day that you get the opportunity to work within such an iconic building,” said Mark O’Connor, Director, Marcon. “The new exhibition tells the story of Belfast’s past, present and future and combines the latest technology with traditional craftsmanship. This is the latest high profile project completed by our specialist heritage team and adds to Marcon’s reputation for delivering world class visitor attractions.” 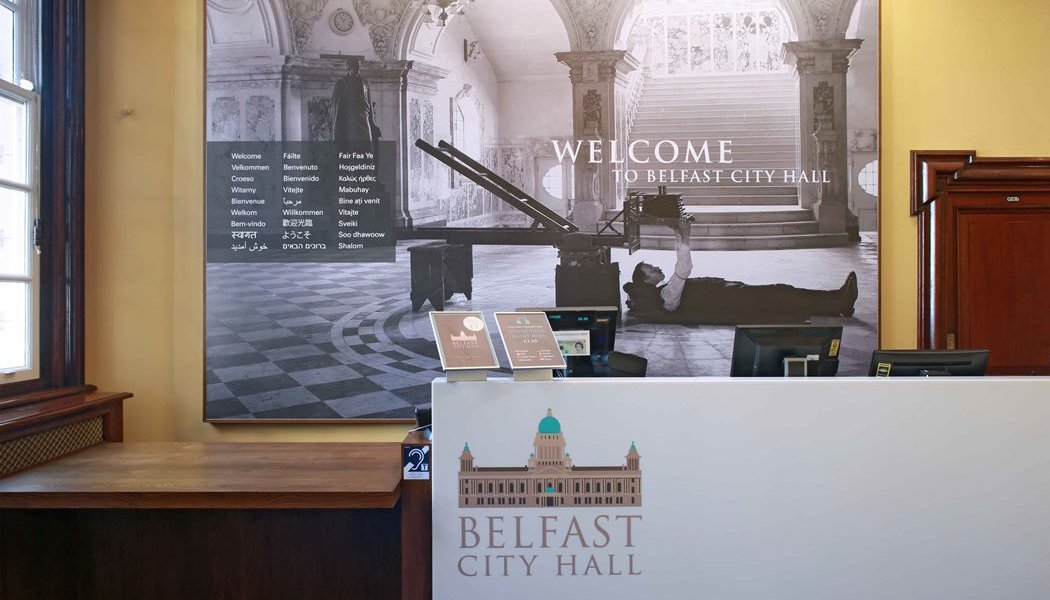 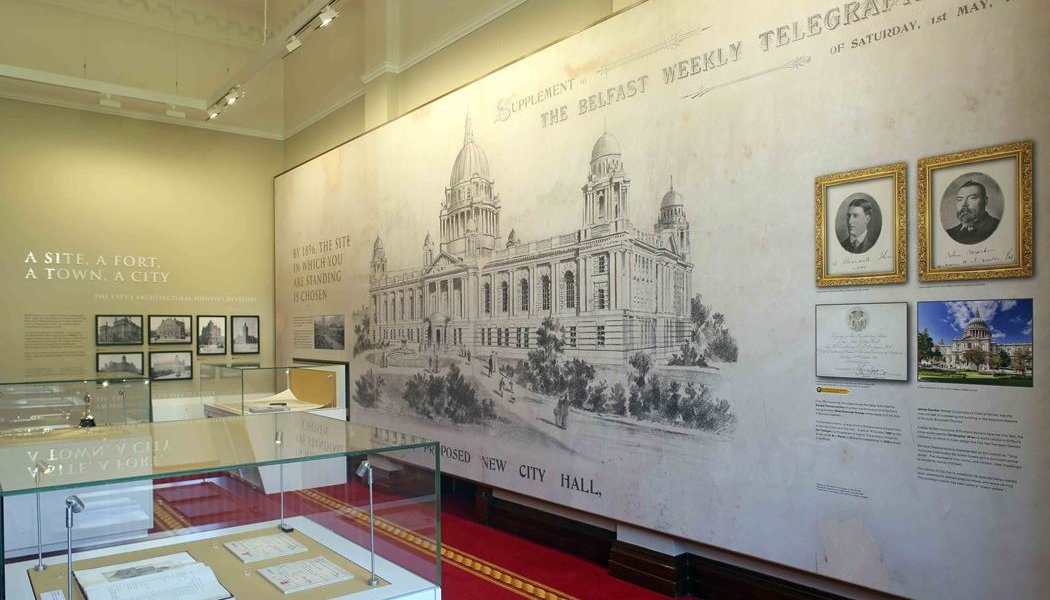 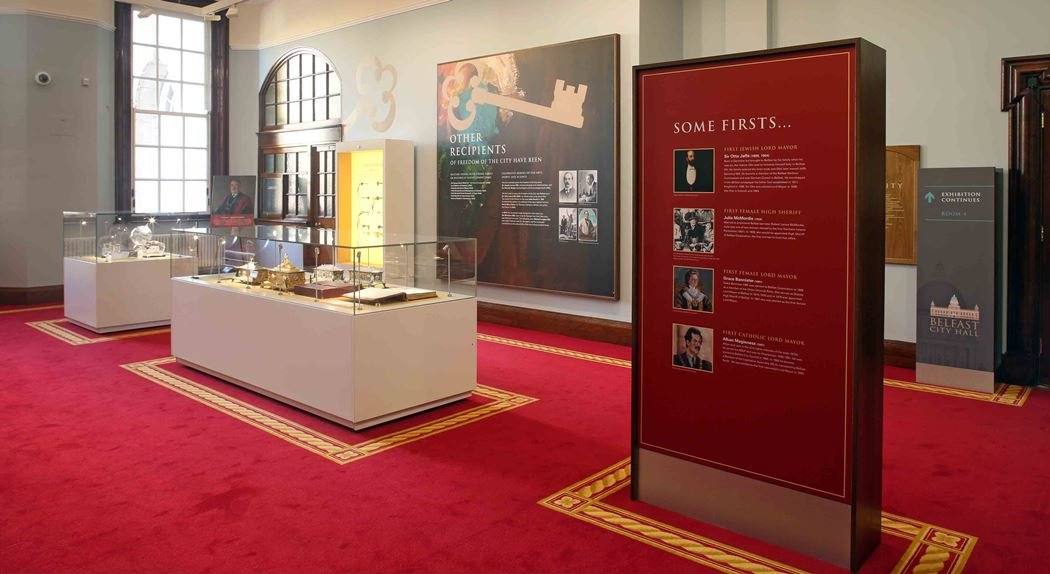 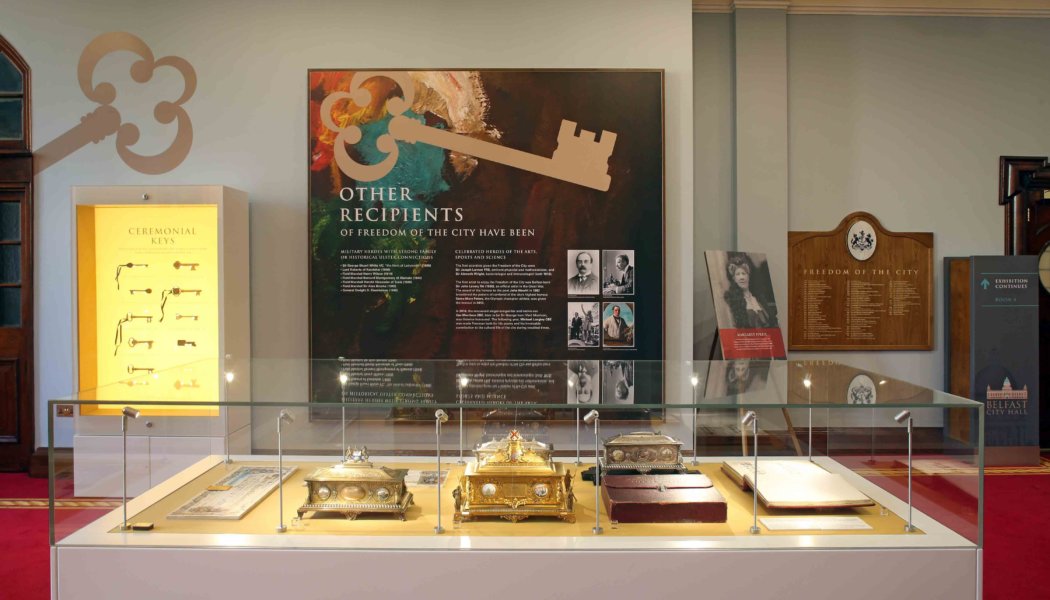 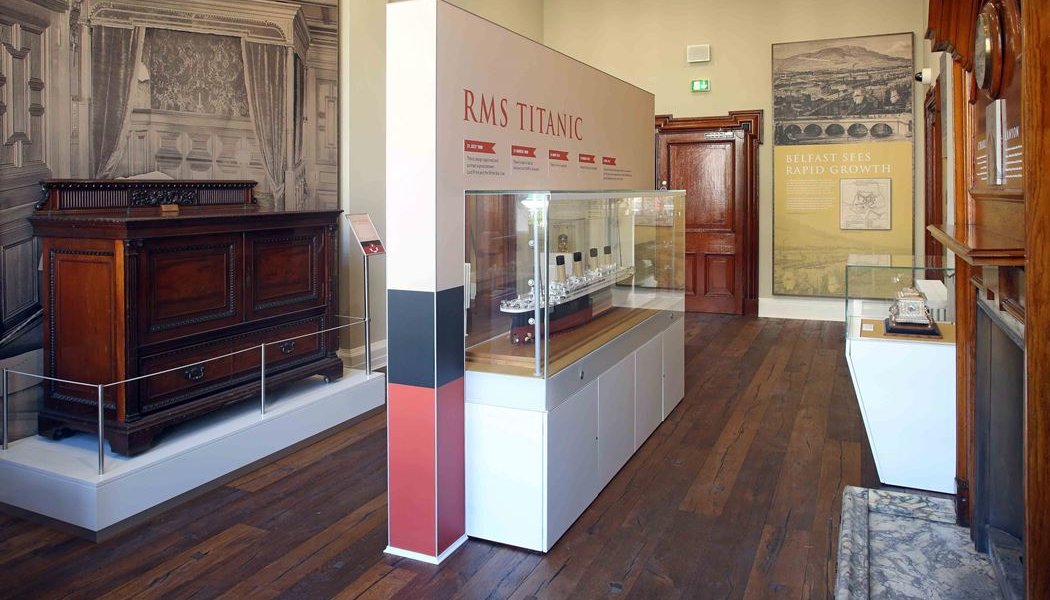 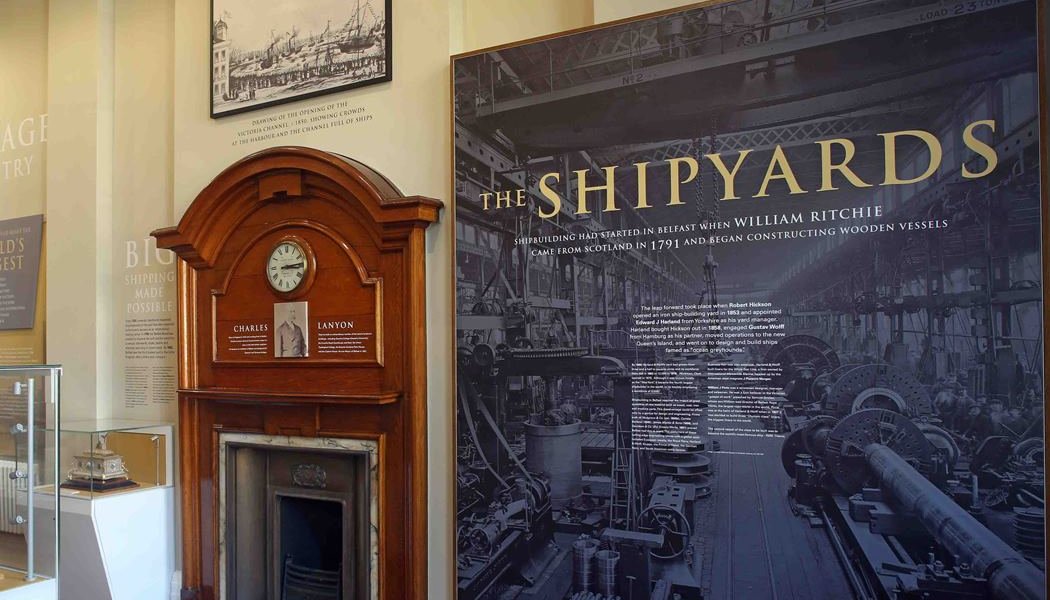 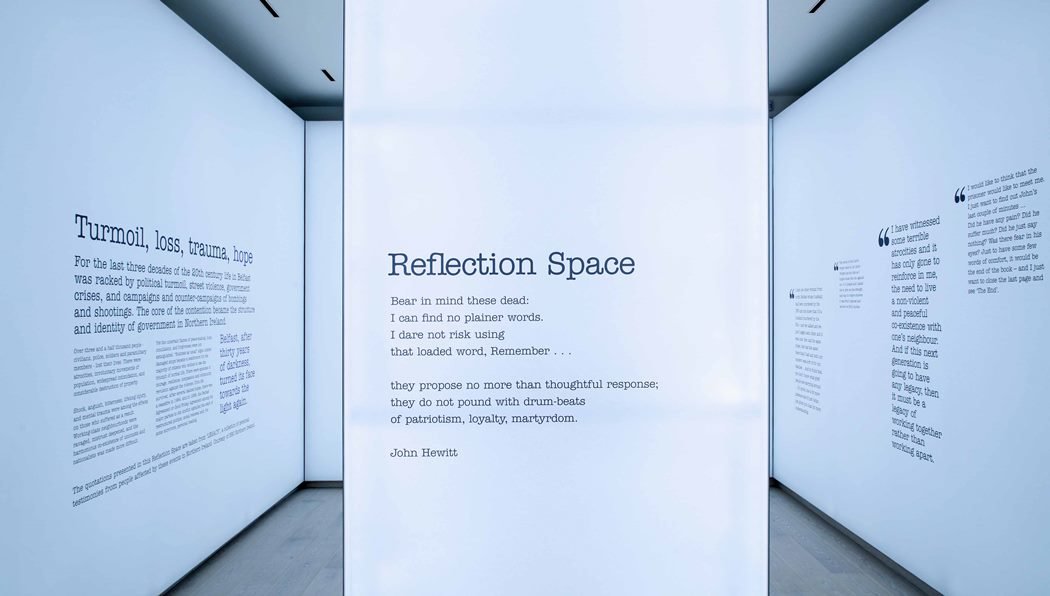 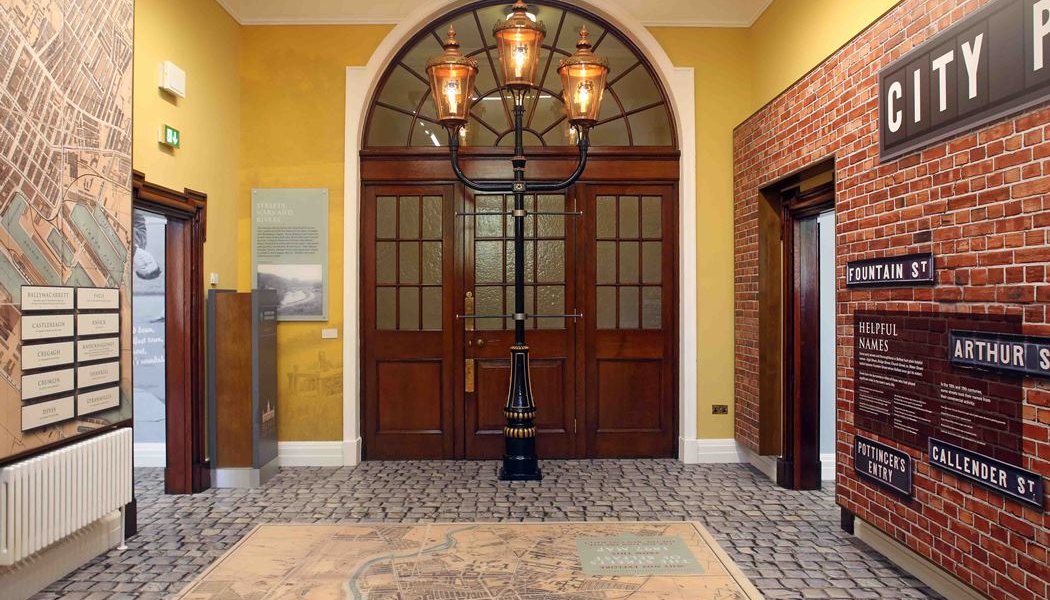 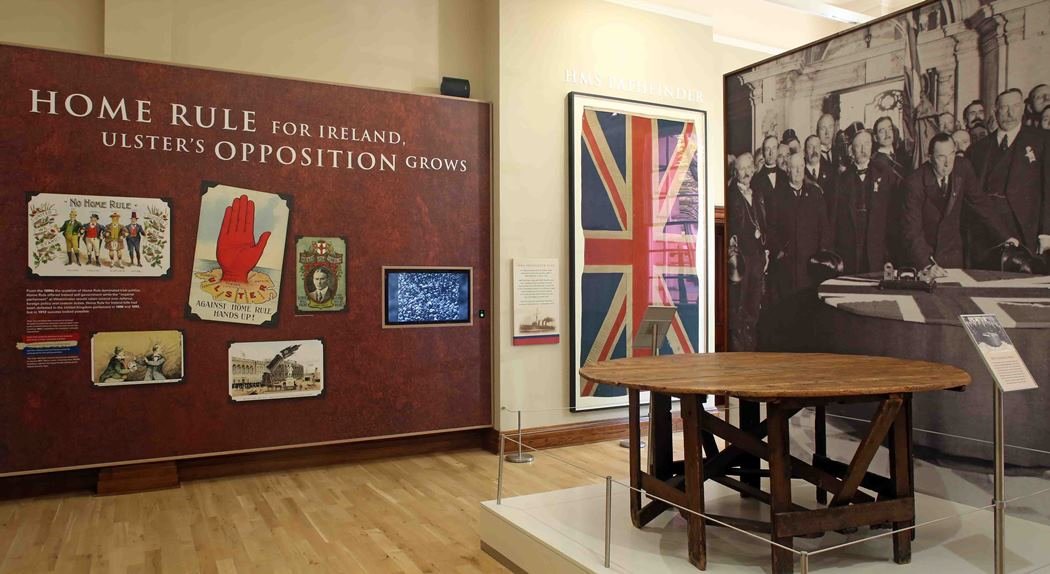 Visitors will be able to journey through 16 rooms in the east wing of City Hall which has now been divided into six separate zones highlighting different aspects of the city of Belfast. The zones are Growth and Governance; At Work and Play; City Speech and City Streets; The City Commemorates; The Reflection Space; and The City Celebrates. They cover everything from the city’s distinct dialect to street games, how the winds of rebellion in the late 18th century swept across Belfast, the importance of its manufacturing and shipbuilding industries, the rise of trade unions, the First and Second World Wars, the Blitz, and the emergence from ‘The Troubles’ to the city today.

“We are delighted that over three years of work has now been realised in the new exhibition,” said Sarah Lyons, Director, Redhead. “Initially, we worked with the political parties in the Council to agree how the past was to be represented. These were challenging sessions which led to a historic agreement. Today, our interpretation, designs and specifications for the exhibition are on show and available for everyone to enjoy in what is a terrific addition to our historical, political and tourist infrastructure.”

Lord Mayor, Alderman Brian Kingston said that Belfast City Hall was one of the most iconic visitor attractions in the city and while its tours have always proved popular it wanted to add to the visitor experience, providing more information which will help them put the city, its traditions and culture into context.

“After learning about our history, culture, tradition and politics the reflection space offers the opportunity to quietly review the traumatic events of Belfast’s most recent turbulent history and gradual move towards peace,” he said. “This exhibition makes an important contribution towards not only reminding us of how far we have come but also that Belfast was, and is, one of the world’s great cities, with a great history and even better future.”

This is the latest museum/exhibition project completed by Marcon in the past few years, following on from iconic projects such as Seamus Heaney HomePlace in Bellaghy, the RPSI Railway Museum in Whitehead, Kilkenny Medieval Mile Museum, the “World’s leading visitor attraction” – Titanic Belfast ® and the American Air Museum at IWM Duxford, which was highly commended in the Permanent Exhibition category at the 2017 M+H Awards in London.