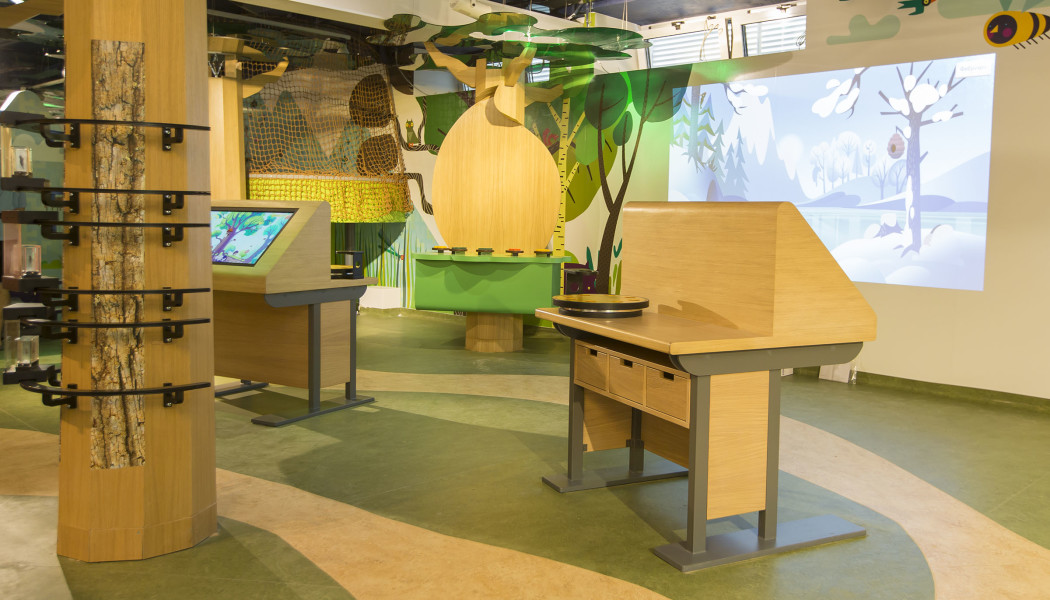 The award-winning 35,000 square-foot Muzeiko was designed by American architect Lee H. Skolnick and funded primarily by the US-based nonprofit, America for Bulgaria Foundation. Skolnick has the Miami Children’s Museum and the Children’s Museum of the East End in Bridgehampton, New York, among his credits. He and his team worked with Sofia-based A&A Architects to adapt a former university laboratory building to Bulgaria’s first museum tailored for kids.

The museum’s centerpiece is a three-story tree scenic element, which rises at the center of the building and represents the past, present and future of the region. At the roots of the tree, the lowest level of the museum features exhibits on geology and paleontology.  The heart of the tree is at ground-floor level where there are displays of habitats and modern architecture.  The tree canopy, capping the top floor, looks to future technologies and space travel.

“Muzeiko has the feel of a science center with its science-oriented exhibits for children,” said Electrosonic project manager Tim Wilson. “The Muzeiko team was new to this kind of attraction, but they were very open to ideas and comments from us based on our previous museum experience.” Electrosonic’s Gary Belshaw served as site supervisor and commissioning engineer for Muzeiko.

To meet the budgetary needs of the museum and ensure easy operation and maintenance by the staff, Electrosonic selected “tried and true equipment” for the exhibits, which would provide robust, reliable service, says Wilson.  Samsung monitors of various sizes act as the primary displays; Christie and Barco projectors are deployed in several exhibits. Elo Touch Solutions touchscreens are the major interactive video components with Dell PCs behind the scenes.

Leading-edge technology plays a role in the visitor experience, too. An Ideum 55-inch touchtable is at the center of an exhibit on astronomical discoveries. Two 46-inch CyberTouch multi-monitors guide visitors through the farm-to-table food area and an exhibit on adapting atmospheres. A GestureTek reactive system captures visitors’ movements for the “Connect 4” exhibit.  RFID interfaces from RFID, Inc. help visitors make healthy menu choices in the “What’s for Lunch?” exhibit.

A Peavey MediaMatrix DSP is at the center of the audio equipment complement. An AMX NX-2200 master control system handles all show control tasks for Muzeiko. Electrosonic networked together three control rooms, one located on each floor of the museum.  AV systems are maintained by Muzeiko staff.

Muzeiko won the Bulgarian Building of the Year Award in the Educational category. The museum was one of five new educational buildings participating in the competition.