Last year marked 100 years since the start of the First World War and The Hub was privileged to be involved with two projects commissioned to commemorate this significant and historic point in world history.

Working with the client and project designers, Ralph Appelbaum Associates, The Hub acting as principal contractor worked with their specialist sub-contractors to present the stories of bravery and innovation that emerged during this early period of aviation in warfare.

Value engineering was critical to meet the projects budget, while ensuring that aspirations for the exhibition were met.

This collaborative process included the client, designer and specialist sub-contractors and was programmed to meet the fixed opening date.

Producing exhibit structures in house, The Hub was responsible for the procurement and co-ordination of specialist packages including; aircraft rigging, audio visual hardware, interactives, graphics, conservation grade display cases and the management of interpretive figures and object mounts in collaboration with the clients’ in house teams.

The final installation fills the hanger with interpretative displays at high, mid and low-level and the connectivity of the interpretation and the movement created by the central spine of display cases and artefacts ensuring the exhibition’s underlying theme of ‘he who controls the air, controls the battlefield’ was met.

“The recently opened First World War in the Air gallery is the impressive result of a strong working partnership between the RAF Museum team and The Hub – delivering a high quality exhibition on time and on budget,” said Karen Whitting Director of Public Programmes Royal Air Force Museum. 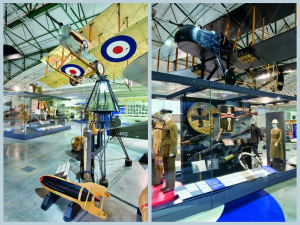 The Voices of War exhibition showed how the First World War was experienced by people in Birmingham, drawing on the rich archive, photography and special collections of the Library of Birmingham.

The Hub’s appointment was due in part because of their experience of working with these system for clients such as Tate and their ability to work with the client and their design teams to develop exhibition layouts and the augmentation of these systems.

Divided into four core themes, the combination of artefacts and oral descriptions, presented with audio visual and graphic media ensured a sensitive exhibition providing access for all.

“Working with The Hub on the Voices of War exhibition was a brilliant experience. Whilst their professionalism and quality goes without saying, their flexibility, creativity and client focus were absolutely key to delivering a first class exhibition on time and to budget,” said Tom Epps, Exhibitions Manager, Library of Birmingham. 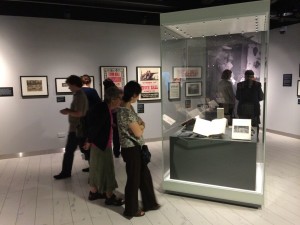