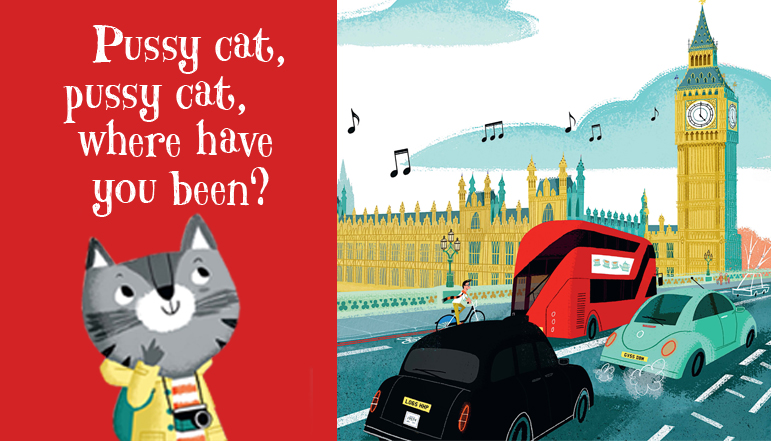 Q&A with Russell Punter, author of a new picture book version of ‘Pussy cat, pussy cat, where have you been?’

What do we know about the original rhyme ‘Pussy cat, pussy cat…’?

The earliest appearance of the rhyme in print is in a book called Songs for the Nursery, published in 1805. No one really knows who wrote the original version, although it’s believed to be based on the antics of a cat that belonged to Elizabeth I’s lady-in-waiting.

What made you think of extending this rhyme into a picture book?

I’d already extended several well-known nursery rhymes to become picture books, and this one seemed like a natural addition to the series. The first verse sets up a premise which makes it ripe for expansion, enabling me to recount the hitherto untold story of Pussy Cat’s journey across London.

How did you choose the various London landmarks that appear in the book?

I started by making a list of all the best-known landmarks. I then whittled that down to include those that were both visually interesting and held additional elements that would appeal to young children, like the Crown Jewels at the Tower of London, or the Whispering Gallery at St Paul’s. I wanted Pussy Cat to have an active role at each location as far as possible.

How do you go about working with an illustrator on a project like this?

I began by dividing the rhyme into scenes, before laying out the text on the pages. In this case, I then wrote a detailed brief for Dan, the illustrator, on each page, describing the images I had in mind to illustrate the verse in question. I also supplied any reference material I thought might be useful. Dan then sent me a pencil sketch of each illustration. I made any comments regarding corrections or additions, after which Dan coloured up his sketch.

Do you have a favourite scene/illustration from the book?

Hard to pick a favourite, but I love the spread on the Tower of London. I think children will enjoy Dan’s depiction of the Beefeaters and their ravens, not to mention the Crown Jewels.

Pussy cat, pussy cat, where have you been?
By Russell Punter, illustrated by Daniel Taylor
Hardback, RRP £10.99
ISBN 9781409596226
Out on 01 September 2015
Publisher: Usborne Publishing
To discuss terms and place a trade order, speak to your Usborne Territory Manager – details can be found at www.usborne.com/uksales