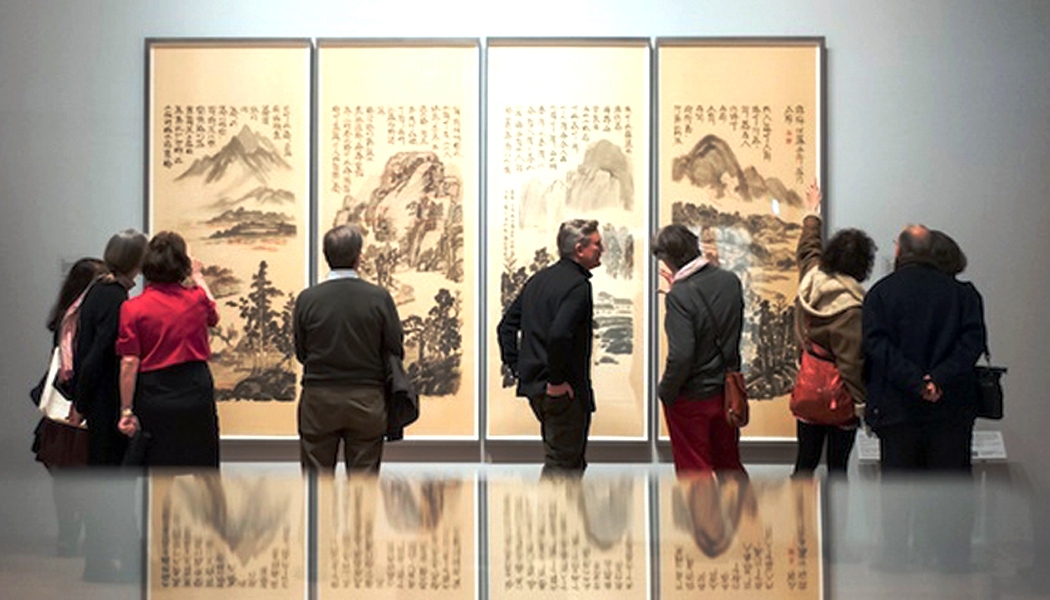 In 2010 a group of museum exhibition professionals hatched a plan to put museums back in control of their smartphone content by allowing curators and staff to build their own digital ‘web apps’. Six years later the City-Insights system is still going strong for indoors, outdoors and temporary heritage interpretation

The concept behind City-Insights was very simple. The company wanted to develop a way of building media-rich sites that looked and acted like traditional ‘native apps’ but delivered all their content via the smartphone’s web browser. Crucially, the content had to be instantly accessible on any device – smartphone or computer – without the need to go to the App Store or Google Play first, and able to be edited and expanded by subject experts without the help of a web specialists.

Reducing the cost and complexity of getting multimedia and information onto the visitors’ smartphones has had some unexpected use cases. “Our first clients didn’t use the City-Insights Platform inside their museums at all,” says Mark Woods one of the four co-founders. “They wanted to take their heritage out into the streets – tell the stories in the places where they actually happened. It was a form of ‘free range’ heritage where you could stand in front of a building and watch newsreel footage of its royal opening in 1947, or listen to a sculptor talk about his inspiration for the statue you are looking at.” By using existing street signage and wayfinding, the Platform could create large numbers of heritage ‘hotspots’ to engage visitors with oral history, vintage photographs and remarkable early footage shot from that spot.

The aim of these city-centre projects was not just to make heritage more accessible to the public, but to drive up visitor dwell time and exploration of the area. Because visitors were accessing the content at known locations, the City-Insights platform could show other historical locations nearby, or suggest local attractions and activities. Once the visitor is inside the system, it is easy to navigate from one ‘hotspot’ to another, and the longer a visitor remains engaged, the greater the benefit to the tourist economy.

“We were very frustrated by the limited options and high costs associated with using handheld devices in museums at the time,” say co-founder, Mike Gardom. “Any solution that used leased devices or downloadable apps burned through a large chunk of the client’s budget before you even got around to making any content. It was pricing smartphone-friendly information out of the reach of small and even medium sized institutions.” 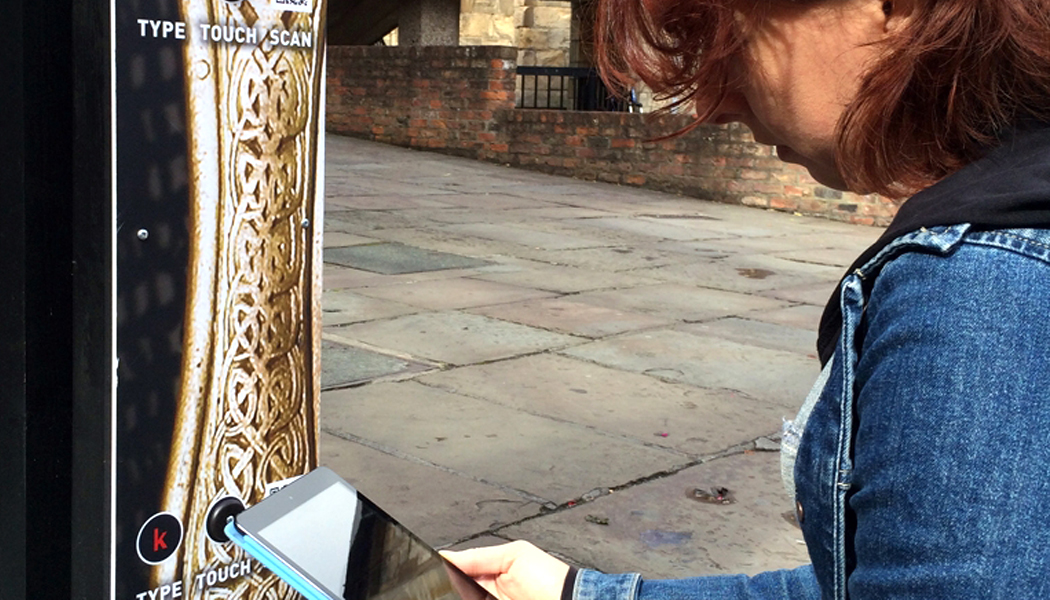 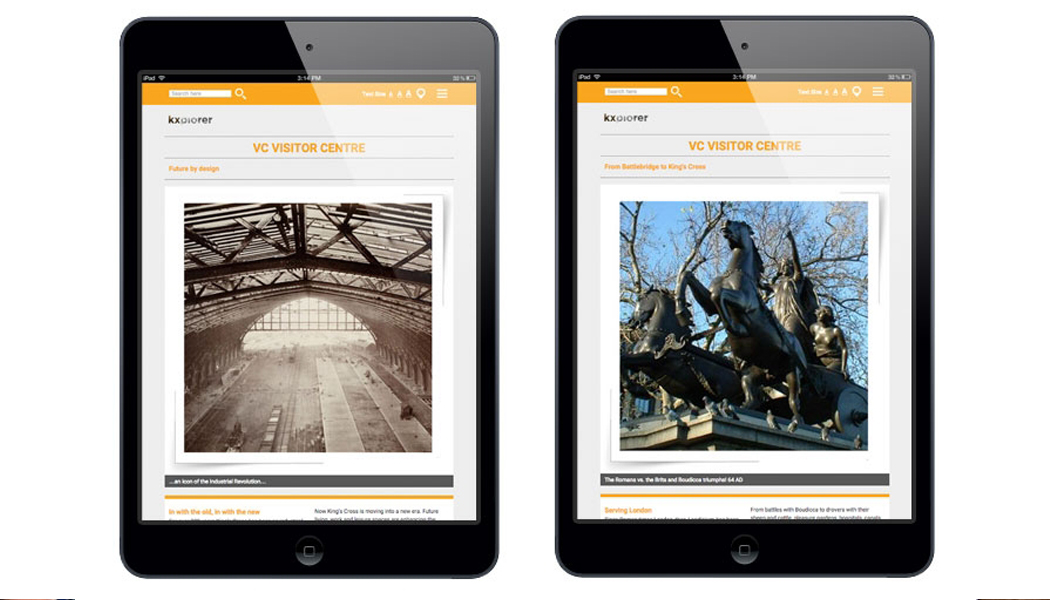 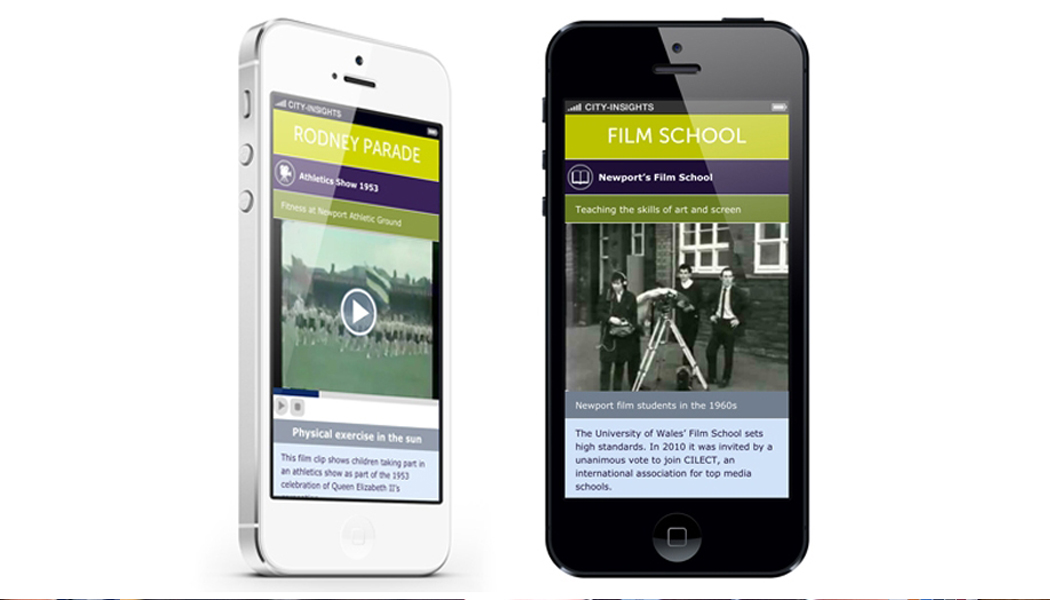 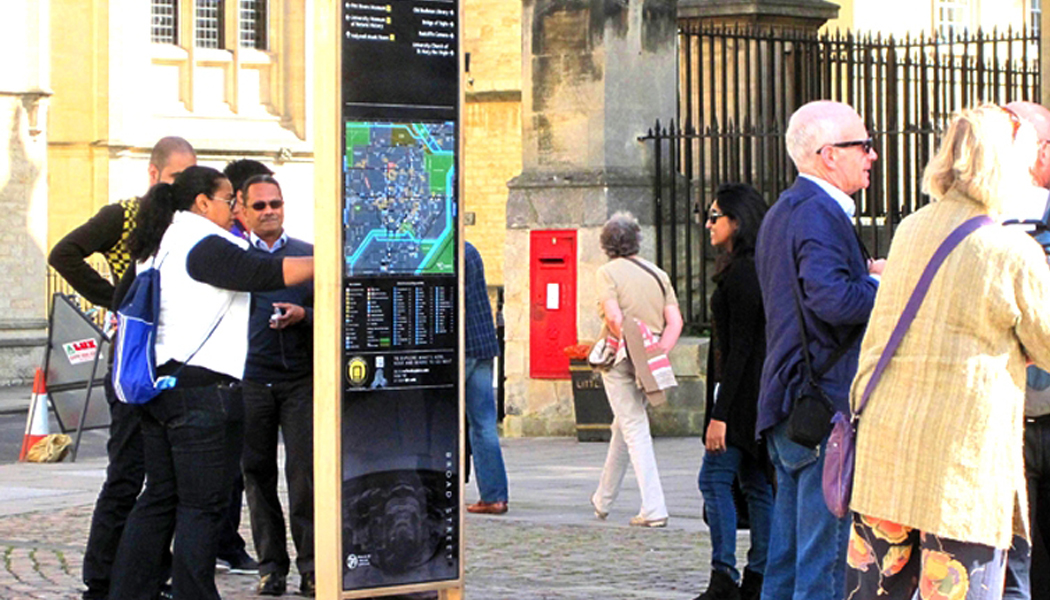 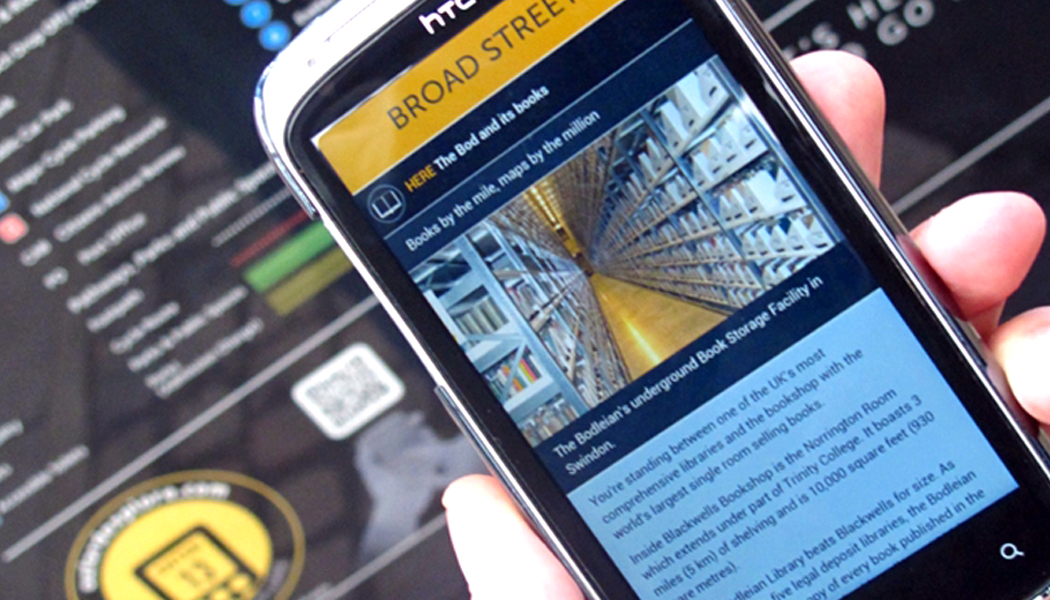 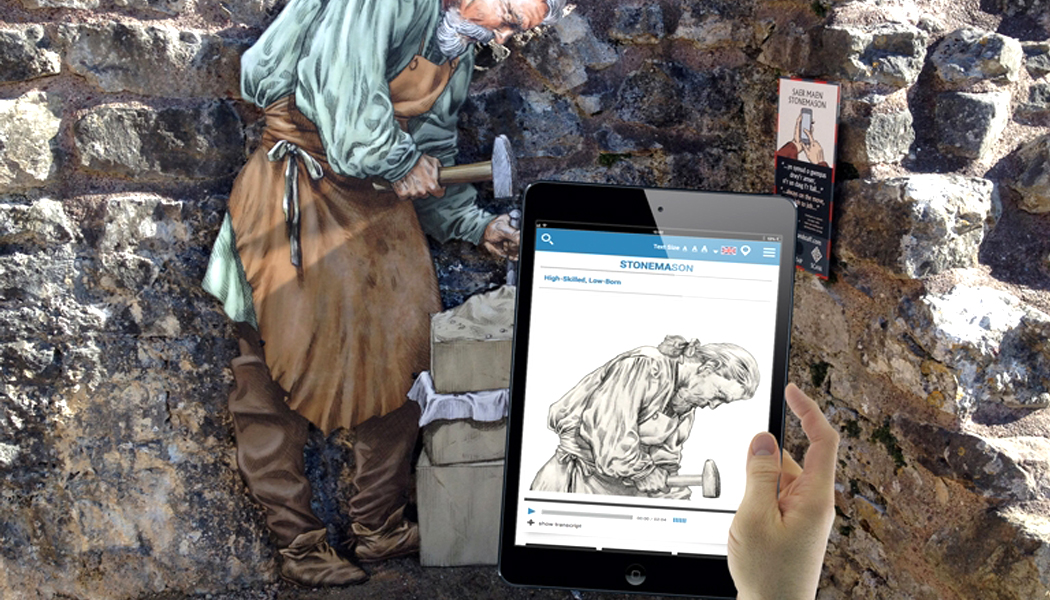 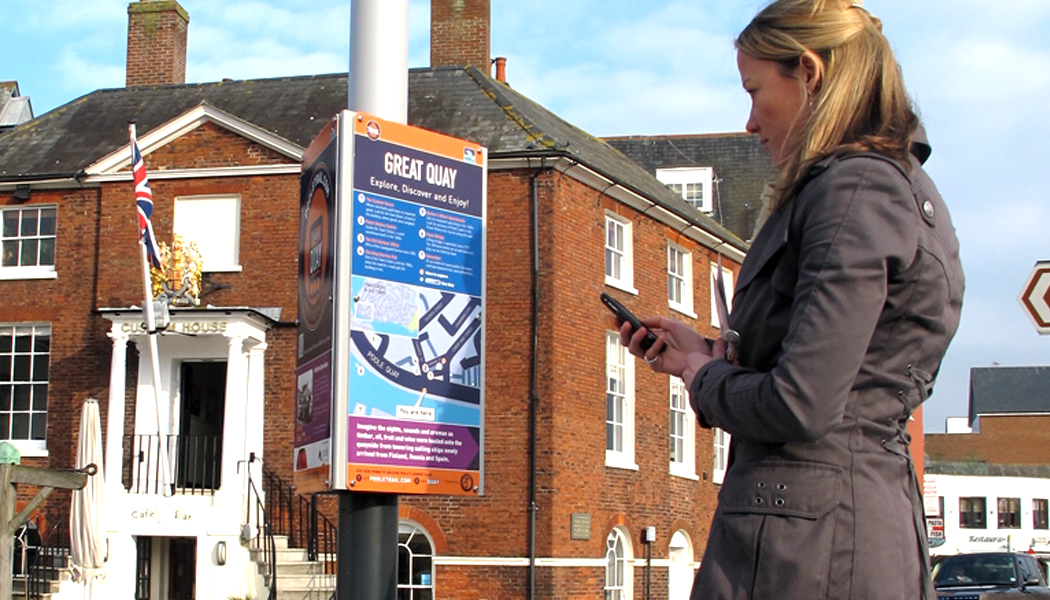 Gardom says one they realised the advantages of delivering smartphone visitor experiences via HTML, it was a no-brainer and meant their clients could start building their content from day one, and keep adding more stories, topics or even entire new trails as they went along. It also meant their budget was being spent on informative content and not on code.

One client used City-Insights’ system to create a multimedia experience for people queuing to get into the exhibition. Every few metres the visitor would pass a hotspot that had in-depth information about one of the objects they would see inside. By the time they got to the front of queue they had ten objects they wanted to look at, and therefore a good reason not to keep going.

The low cost of using a web-app system to deliver content also allowed for another unusual application at the Ashmolean Museum where City-Insights created a visitor experience around a temporary exhibition on the work of a modern Chinese calligrapher.

The museum had a wealth of information and insights that put the works in context, but were impossible to fit onto the graphic panels. For the first time, web-based apps made it economically viable to create dedicated smartphone content for non-permanent exhibits. “We were able to record the curators and the artist himself, and make their contributions available next to the works on display,” says City-Insights Director Sarah Mallock. “There was one picture in particular, where the artist was keen to show that the seeming Chinese writing was in fact a very stylized form of English – you could spot the exact moment when the visitors with the smartphones realized they could read what they had previously just glanced at.”

However, handing curators a simple and robust Platform to get their expertise into the palm of the visitor’s hand is only one half of the story. The City-insights team say that audiences have a limitless appetite for good content but limited attention-span to devote to any one page of content. They use the modern-day phenomenon of a person using mobile internet to get their news and spending a few minutes or even seconds on a story. This means that City-Insights help their clients think about preparing content in a less linear way. So where you would have a long sentence on a graphic panel, you would need two short paragraphs on a small screen. Text paragraphs become separate pages, and so on.

Web apps have remained a niche market in the heritage sector, which is still largely focused on traditional download apps and leased hardware. But City-Insights has benefitted from being able to offer instant, roll-your-own solutions to a wide variety of clients. “We can tell our clients that in less than an hour we can train them how to build their own smartphone trail, at the fraction of the cost of developing an app,” says Gardom. “It can be a bolt-on to an existing display, a way of extending their interpretation into a wider area, or a means of reaching new audiences – or all three. Our greatest achievement has been to turn smartphone-friendly visitor information into something that is well within the budget range of any museum or historic town.”

At the Xu Bing temporary exhibition at the Ashmolean Museum, City-Insights showed visitors how to read the artist’s Chinese treatment of English