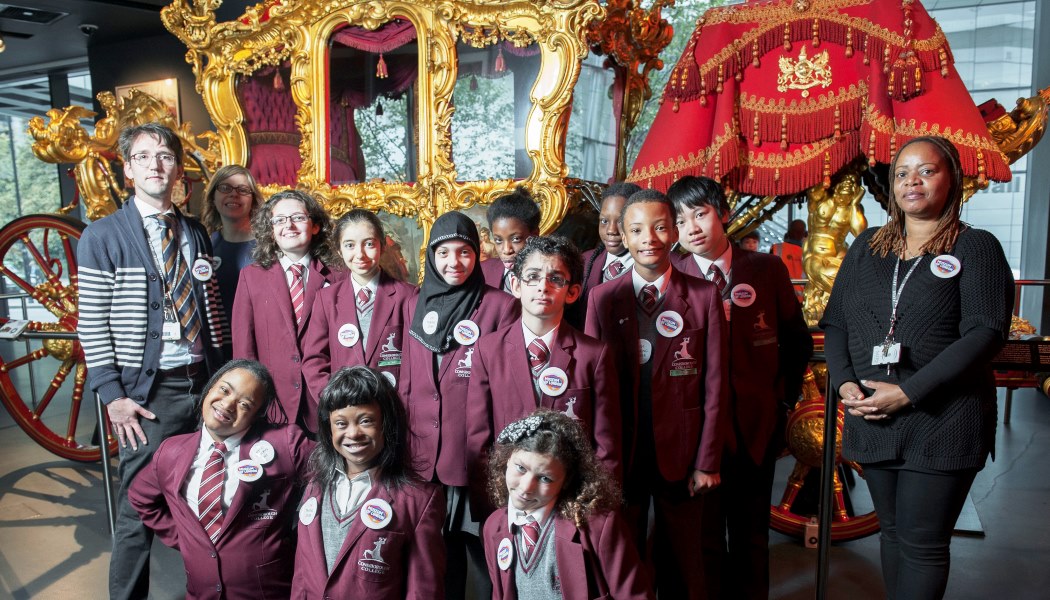 Thousands of youngsters will be assuming the roles of curators, guides and exhibition designers as they get a taste for life as a museum professional and M+H Advisor will be publishing a selection of their stories and photographs on Takeover Day 2015.

From Falmouth Art Gallery to Fulham Palace, from Stonehenge to the Shakespeare Birthplace Trust, museums, historic homes and heritage sites all over England will be managed by children.

Not only will this next generation of workers be answering the phones, they will be welcoming visitors and designing exhibits. They’ll be primary school pest controllers, teenage tour guides, 12-year-old conservators and curators, eight-year-old archivists and interpreters, secondary school catering and shop assistants. They will all be sporting ‘I’m Taking Over’ stickers and ‘We’re Being Taken Over’ posters on the organisations’ front doors.

Young people are the heartbeat of the arts – they contribute fresh ideas and new perspectives. Takeover Day is about further encouraging the pivotal contribution that they make

Run by charity Kids in Museums and supported by Arts Council England, Takeover Day gives children and young people a meaningful and powerful role in museums usually reserved for adults.

“Tomorrow more than 3,500 young people are going to be at right at the heart of museums. For many of them, it will be their first experience of a museum,” said Philip Mould, Kids in Museums President. “For all of them, it will be empowering and eye-opening, learning about museums from the inside. Young people are the heartbeat of the arts – they contribute fresh ideas and new perspectives. Takeover Day is about further encouraging the pivotal contribution that they make.”

Kids in charge – here are just some of the ways in which children and young people are taking over the country’s museums tomorrow:

Step back to Neolithic times at Stonehenge on Takeover Day, and be greeted by children and shown around the stones on one of their child-led tours.

At the Shakespeare Birthplace Trust, Stratford-upon-Avon, ten-year-olds in Tudor dress are guiding around visitors.

Sixty 12-year-olds will be acting as guides at Lord’s Cricket Ground, London, working with the museum at Marylebone Cricket Club.

If you phone Cliffe Castle Museum, Keighley, on 20 November you could be answered by a nine year old. Children are also acting as pest controllers and conserving the collection.

More than a hundred children are running the good ship Cutty Sark, Greenwich, London – organising a fun-filled day for families and their pre-school kids.

At the Galleries of Justice Museum, Nottingham, local students are costumed interpreters, explaining the spine-chilling artefacts.

Teenagers are creating a Snapchat feed for the Cooper Gallery, Barnsley, producing the content themselves.

On Takeover Day you won’t get lost at Ironbridge Gorge Museum, Shropshire, because 15 ten-year-olds are designing a trail.

Expect to hear the clink of coins at the De La Warr Pavilion, East Sussex, as Year-10 students produce a zine for the gallery and customise the donations box.

Thirteen year olds at Derby Museum and Art Gallery are rising to the challenge of creating an exhibition from scratch within a day, including selecting the pieces, writing the labels, doing the social media and organising a VIP launch in the evening!

At Brooklands Museum, Surrey, 30 secondary school students are running an art workshop, supervising the science gallery, manning front of house and giving tours to the public.

At Belton House, a Lincolnshire historic home, 16 teenagers are putting on an exhibition of finds from their archaeological dig of a WW1 machine gun corps camp and leading guided tours.

Conisborough School takeover the Museum of London in 2014.