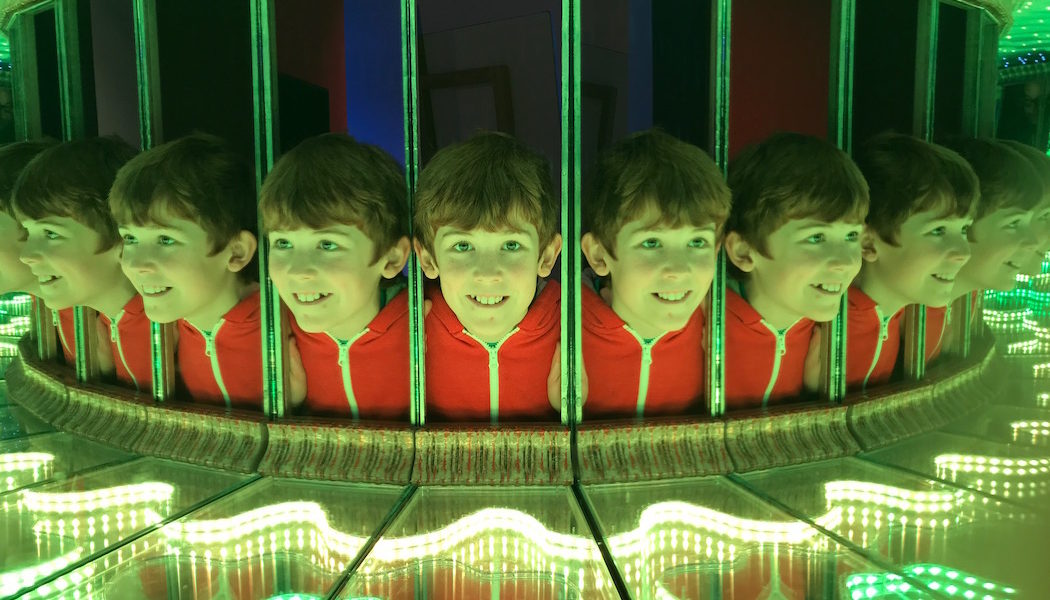 Feeling the force: The Science Museum’s Wonderlab and Rogue One from the perspective of a 40- and 10-year-old

A visit to the Science Museum in London to watch new Star Wars film, Rogue One and experience the new Wonderlab interactive gallery had great potential for being an exciting day out but how would it be for both an adult and child? I travelled by train from Birmingham to London on Saturday with my 10-year-old nephew Jake – who took it all in his stride – to find out

There’s nothing better than going into a gallery and being able to touch everything that is there and this is 100 per cent the case at Wonderlab at the Science Museum. Not only can you touch the exhibits but you can also jump on some, twirl around on others and there are three slides to slide down with different surfaces that demonstrate friction.

Opened in October as the UK’s largest interactive gallery, Wonderlab is a self-contained gallery on the third floor of the museum that has 50 interactive exhibits. There’s plenty of room to run around as three former exhibition spaces have had their walls knocked down to create a 25,000 sq ft science nirvana.

As soon as you enter Wonderlab you become immersed in what’s around you and as an adult it’s both exhilarating to see a child able to get a hands on experience of the exhibits and fun to take part together. For example, the Sound Bite exhibit demonstrates how we can hear sounds through our teeth and bones. This is done by picking a straw and placing it over a metal rod and biting down on it to hear music playing through your teeth. So there we were both biting on to metal rods and listening to music through our bones. (Although I didn’t join Jake on the slides – is there an age limit on them?) 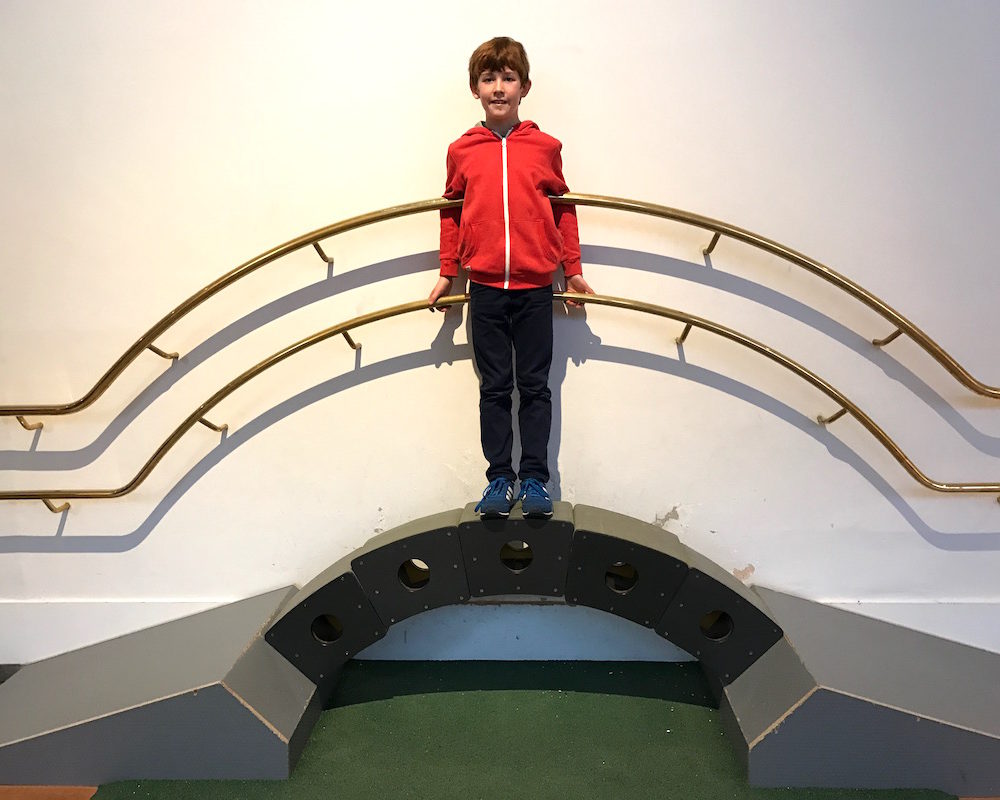 Jake standing tall on the bridge we built at Wonderlab

Other exhibits kept us busy for a while such as the Air Cannon, which shows how a gas can be used to move objects and Rotation Station, where you spin around and experience centripetal force, pulling you inwards to turn you in a circle (we both had a go on these). The Chemistry Lab had a huge periodic table where live experiments were carried out with real chemicals. We also built a bridge using the blocks provided and the principle of a key stone and Jake was brave enough to stand on our bridge when we had completed it. 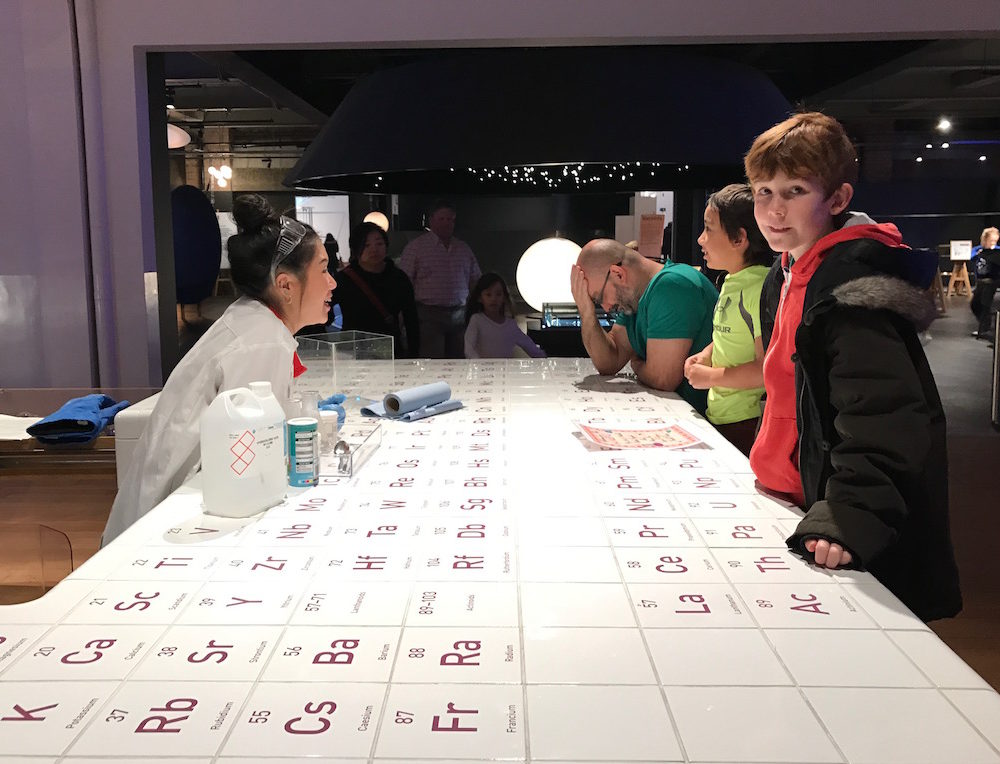 Following the Wonderlab we had a snack in the Media Café (a blueberry muffin for Jake and a strong coffee for me) and then ventured into the new Mathematics Gallery designed by Zaha Hadid. Here we not only saw the beautiful signature waves of Hadid’s designs but also some of the 100 objects on display that have helped build the modern world over the past four centuries and, of course, the rise of computers and machines from Charles Babbage’s early prototypes to Guinevere, the National Lottery’s number-picking machine that has helped many a museum funding in its time.

Following this we walked through the Exploring Space gallery and the Making of the Modern World, which would lead us to the IMAX theatre. This was rather fitting as we walked among space probes, rockets and satellites before entering the interstellar world of the Jedi and their evil enemies. 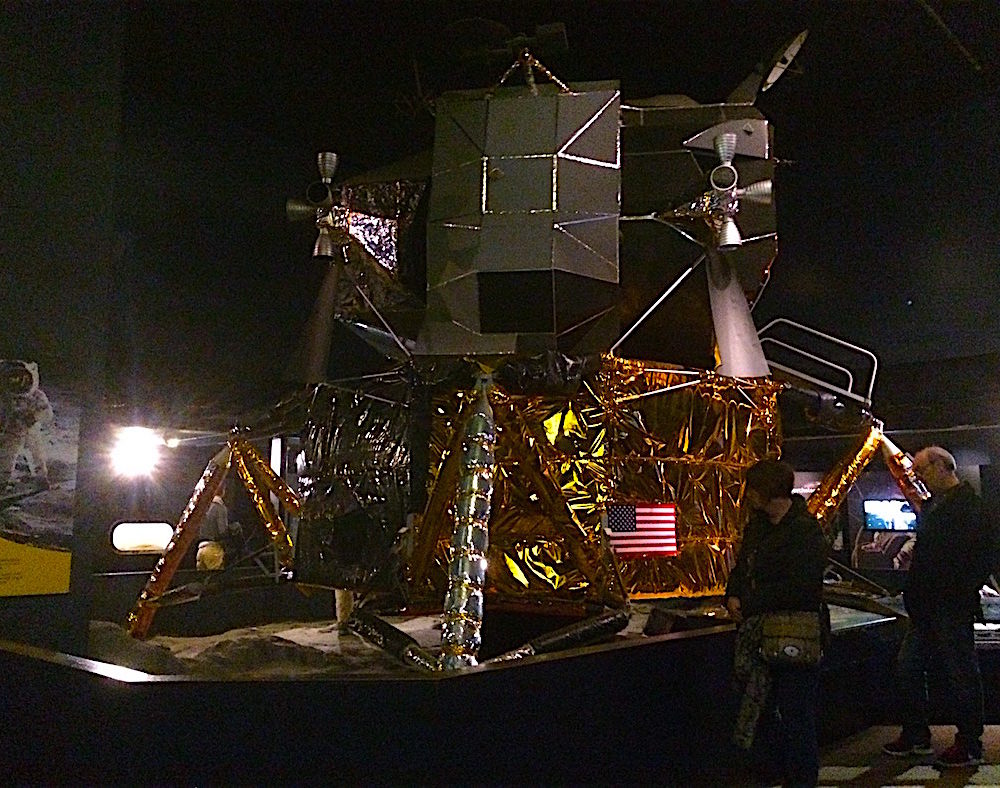 A United States lander in the Exploring Space gallery, snapped by Jake Murphy

Rogue One: A Star Wars Story was action packed throughout and watching it on 70mm IMAX was exceptional. I found Rogue One a little more gripping than the Star Wars originals (which I wouldn’t change) and the prequels. What I liked about it was the sheer desperation you felt in all the new characters to risk life and limb on a seemingly doomed quest to steal the evil Empire’s plans to its new weapon: the planet-killing Death Star. The flight scenes in the film had me moving my head at times and my stomach moving involuntarily, it was that real. As this was the first standalone movie of the anthology, that fitted in between Revenge of the Sith (Episode III) and the original Star Wars (Episode IV), I felt the director Gareth Edwards had more time to manoeuvre with special effects, making it more dramatic.

Final word from Jake: “The Star Wars film was really good and we had a massive screen to watch it on. My favourite character in the film was the pilot Bodhi Rook. There were lots of interesting things about scientists in the museum and a lot of preserved items for you to look at. I’d definitely recommend it to any budding scientists, or anyone to be honest.”