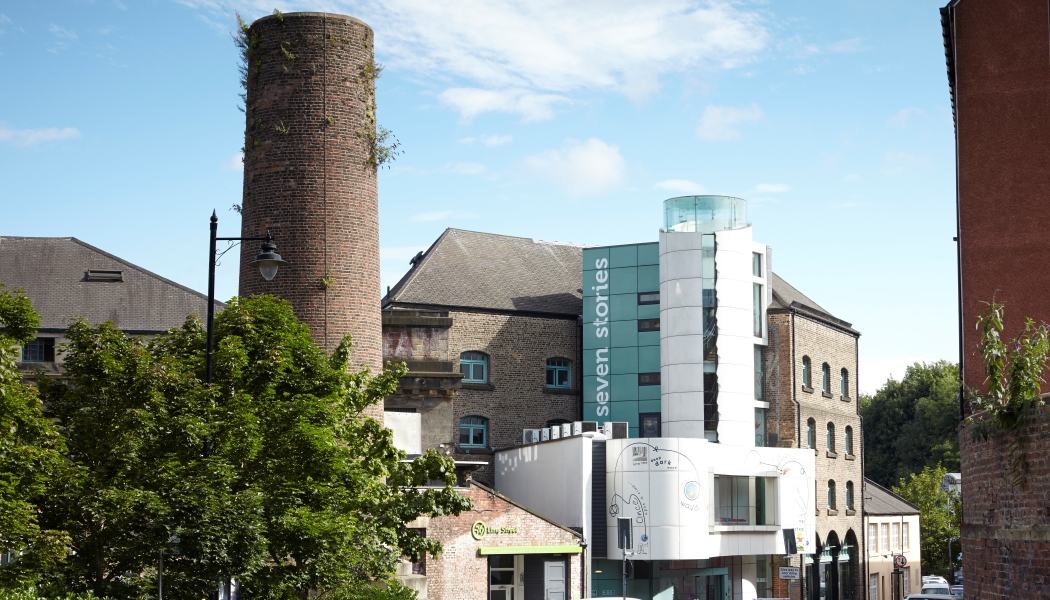 Following 10 years since its establishment and 700,000 visitors later, Seven Stories, the National Centre for Children’s books in Newcastle has undergone an extensive refurbishment to make its visitor experience even more magical for existing and new audiences

Last week Michael Morpurgo, author of War Horse and one of Britain’s greatest children’s writers, with more than 150 titles, donated his entire archive to Seven Stories, which means it will be the custodian for the writer’s archive as it stands now and for the remainder of his creative life.

Its learning and outreach activity is one of the most important elements and Seven Stories has worked with 200,000 children and parents in schools and communities. And over the past decade Seven Stories has curated 27 original exhibitions, with many of these going on to tour across the UK, taking Seven Stories’ work to towns and cities in England, Scotland, Northern Ireland and Wales and seen by 1.3m people. In 2012, Seven Stories was formally granted National status by Arts Council England, in recognition of the national significance of its work.

Seven Stories won the National Lottery Award for Best Education project in 2013 in recognition of its work to save, celebrate and share Britain’s wonderful literary heritage for children nationwide. Regionally the centre has made a real difference to the reading and creative lives of children and young people from across the Northeast.

To maintain and improve on its success Seven Stories closed for three months  in April to undergo a huge refurbishment with the aim of enhancing the visitor experience as well as improving the building’s function to reduce energy, and increase its visitor numbers. 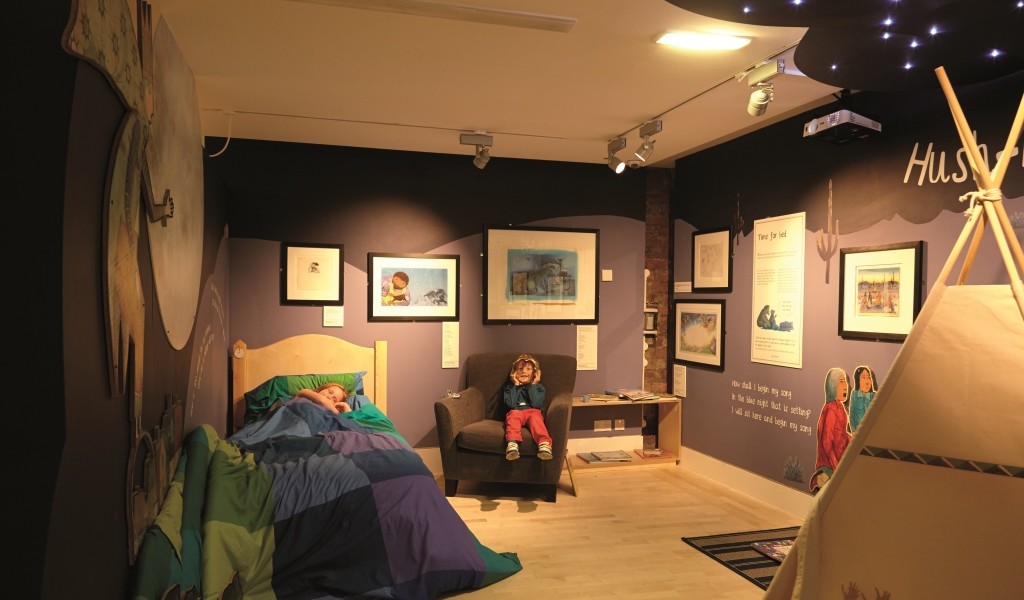 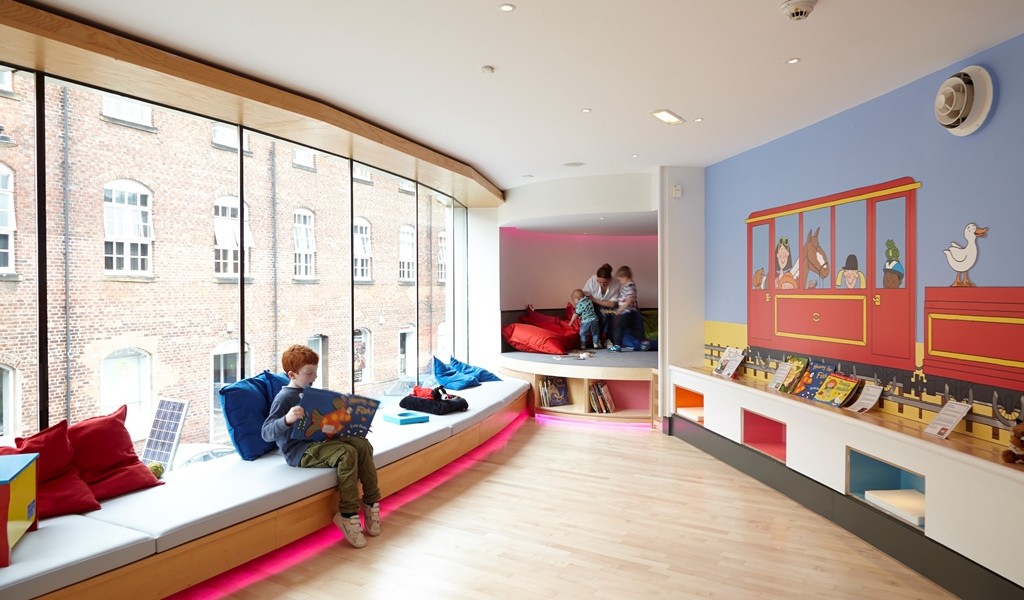 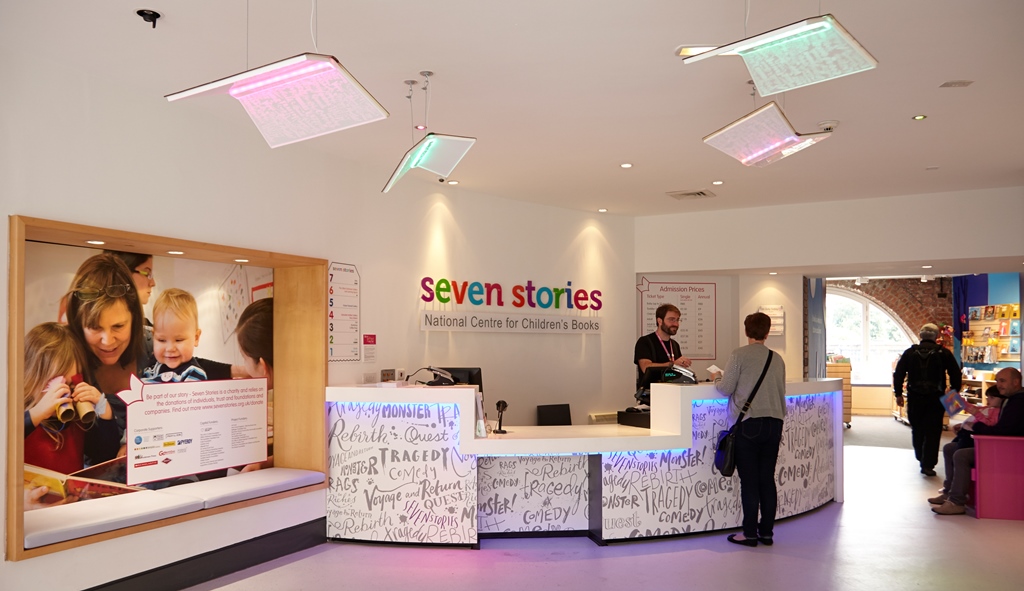 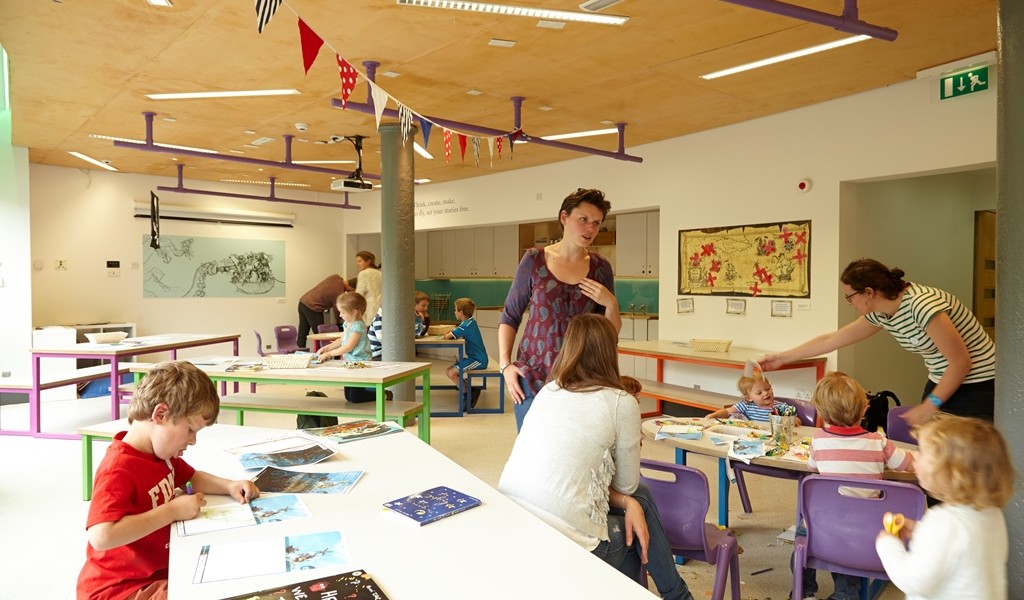 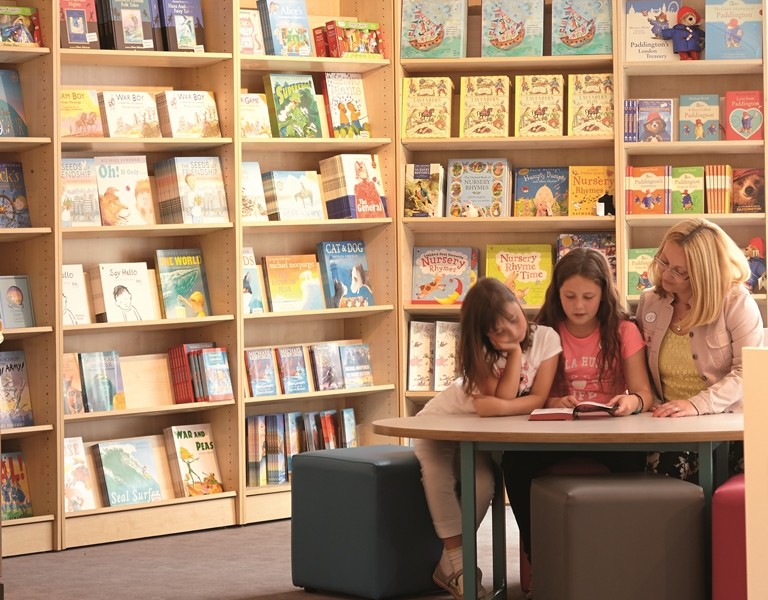 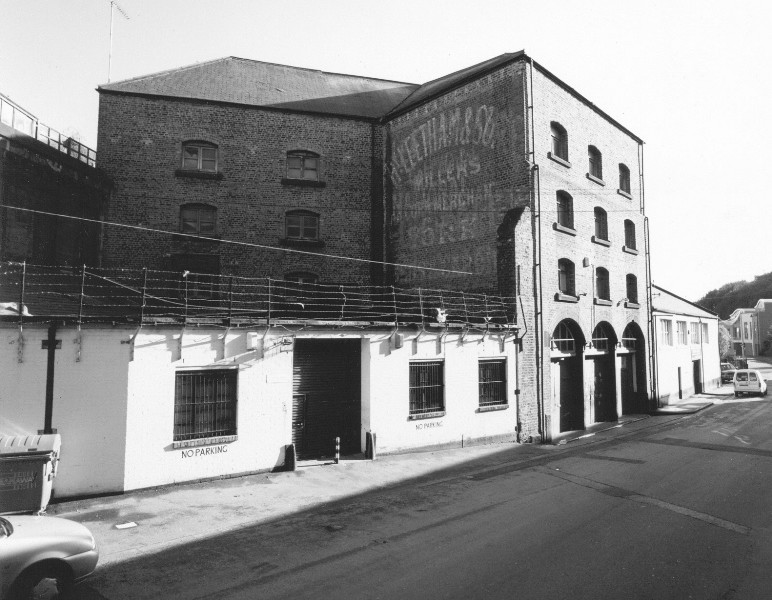 “Seven Stories has become part of childhood for thousands of children from the North East and further afield, and has been successful beyond our hopes and dreams,” says Kate Edwards, Chief Executive of Seven Stories. “This refurbishment and our new exhibitions will make Seven Stories even more welcoming and magical for generations to come and a great day out for children and grownups alike.”

In a relationship spanning more than a decade, architectural practice ADP was invited to improve the building’s facilities to coincide with Seven Stories 10th birthday, after the firm originally converted the Grade II listed mill from 2002 to 2005.

The seven-storeyed Victorian warehouse was semi-derelict and in need of substantial renovation. Located alongside the river Ouseburn in an area of cultural regeneration, the conversion of the building brought new life to this impressive listed structure. ADP kept the mill’s heritage value intact by retaining all of the original features and volumes, and housing new accommodation including the reception area, main circulation and storage in a contemporary extension.

One of the first things children and families see when they enter the newly refurbished Seven Stories is the illuminated flying books that are suspended from the ceiling in the reception area. The entrance is bright and light, illuminated by gobos and a friendly up-cycled reception desk that is fronted by artist Sarah Jane Coleman’s text design exploring the “seven stories”.

Signage has been refreshed throughout the building, and designed with a font to appeal to both adults and children. The main staircase, which from the street outside resembles a piece of torn paper formed into a cylinder, is a major part of the Seven Stories experience, encouraging visitors to explore the building. Orientation from the staircase to the galleries has been enhanced by large illuminated numbers that announce the levels of each floor.

By reviewing the visitor flow routes, measures have also been introduced to improve the building’s energy efficiency and accessibility. The bookshop has benefitted from new energy efficient lighting and an accessible counter.

There are now more flexible learning spaces and overlooking the Ouseburn River, the museum’s maker space “The Studio” has been enhanced into a working artist’s studio where aspiring young authors and illustrators can practice different techniques.  Former storerooms have also been converted into ‘The Word Lab’: a flexible space which doubles up as an education area for school groups and an informal place to eat lunch.  Most notable in these spaces is the careful use of colour signatures, where the Studio adopts a rainbow palette, Word Lab is black and white, and showcases through its graphic displays manuscripts held in the Seven Stories Collection, including those of David Almond, Robert Westall and Enid Blyton.

The popular Story Station has become a dedicated area for the under-4s book play, while the Gillian Dickinson space on level six has been converted into bespoke education, meeting and training facility, available for hire to increase the financial resilience of the scheme.

In the Attic, performances and story times have been improved through theatrical lighting, a Gobo projector and colourful, soft, flexible seating.

Seven Stories’ two galleries, already conditioned to ensure suitable environmental conditions for original artwork and manuscripts, have been enhanced by installing fermacell on all walls to ensure ease of hanging artwork, reducing noise pollution from the conditioning units,and polishing the wooden floors.

“Having been lucky enough to be commissioned as the original architect for Seven Stories back in 2002, we were absolutely delighted to be once again working with Kate and her staff at this National Centre, helping breathe new life into the project in preparation for its landmark birthday,” says Charles Greenall from ADP. “It is not every day that an architect gets a chance to revisit their scheme and develop their thinking to address the needs, demands, aspirations and sense of adventure that each unique visitor brings with them.”

Fundraising and earned income continues to be a priority for the organisation; though it is part of the Arts Council’s National portfolio, the investment support is less than 40 per cent of the total running costs of this unique National institution.