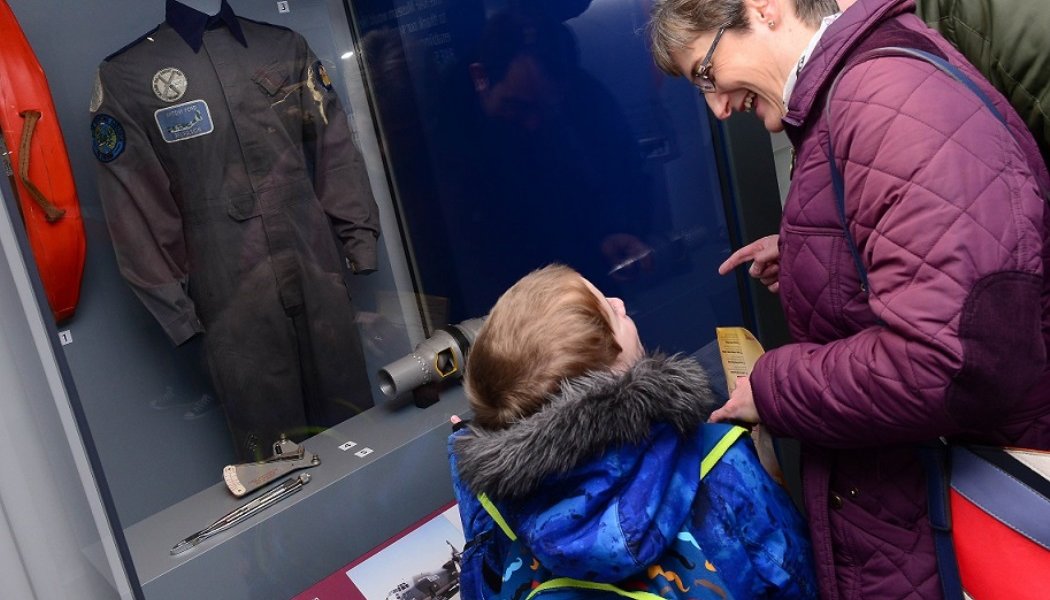 Main Image: New displays at RAF Museum Cosford give visitors to the site a better understanding of the people and role of the RAF
Share

A new display at the RAF Museum Cosford has transformed the way visitors are introduced to the RAF and the rest of the site. As part of the final stages of the RAF Centenary Transformation Programme, the new exhibition was built and installed by specialist fit-out contractors, The Hub

The Hub were asked by the Royal Air Force Museum to expedite works at Cosford to meet the RAF Centenary date of 1 April 2018. This small exhibition utilises components from ‘RAF Stories: The First 100 Years 1918–2018’– recently installed at the Museum’s London site and opening on 30 June – designed by MET STUDIO and provides an introduction to the RAF’s 100-year story and relevant collections.

The development saw a major intervention into what is essentially a large atrium into the first hangar at Cosford that would give visitors a better understanding of the people behind the RAF. Since 2003 the space had been occupied by a timeline that talked about the history of flight from 1903-2003.

“It was quite a static display, not talking about the history of the RAF, it was very much focused on aviation, like a lot of displays across the Museum in past years,” says Angela Vinci, the RAF Museum’s Head of Exhibitions and Interpretation. “We didn’t have any collection there previously as there was not the right environment to display them and we didn’t have any showcases, so The Hub’s brief was to build that new environment.”

Now the new display at Cosford has five large showcases, which present objects that have never been on show before with video projections and full-size silhouettes that tell personal stories. It is hoped that the site will attract 398,000 visitors from April 2018 to March 2019, an upturn of 10 per cent. 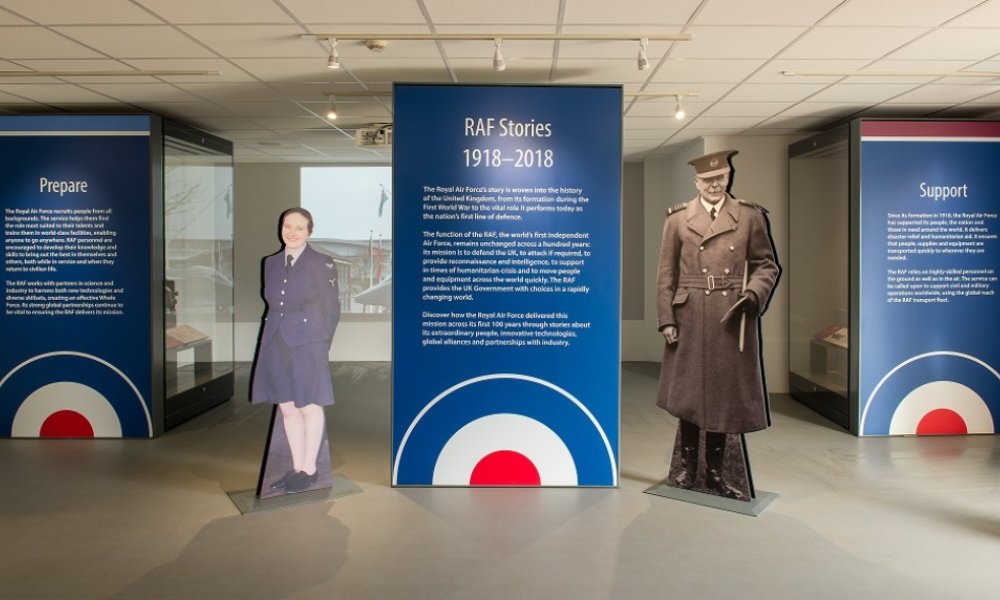 “It’s a completely different experience for all our visitors and that is the very first room where our visitors pass when they come to Cosford before our main hangars,” says Angela. “It is the entrance to the other displays.”

For the entire project the RAF team held discussions about what they were expecting and used the Cosford display to set design and build principles that are being applied in London.

“Not that it was a guinea pig, but it set the standards, from a fit-out point of view, in terms of quality,” says Sofia Henriques, Exhibitions and Interpretation Manager. “The Hub have been really good in adapting to and responding to difficulties with the project and unforeseen challenges. Across all areas the relationship is based on honesty and trust and also about resolving problems positively as we all wanted to deliver a great exhibition.”

To maintain consistency between the RAF Museums in London and Cosford, The Hub utilised the same team on both sites to deliver a mirrored exhibition.

“Our focus throughout the delivery of RAF Museum Cosford was maintaining MET STUDIO’s original design intent and then adapting the designs to maximise the potential of the space available at RAF Museum Cosford to open in time for the Centenary celebration on Easter Weekend,” says Joe Clarke, Project Manager at The Hub. To meet the opening deadline, programming was crucial, says Joe, and this was achieved by scheduling the enabling works and informing all specialist subcontractors and the Royal Air Force Museum of critical dates.

The Hub also conducted a comprehensive site survey early on in the programme, which allowed their design technicians to identify changes required in the design and also highlighted changes that need to be made, such as the need to reduce set work heights and review showcase access. The project has not come without its challenges and prior to the fit-out, The Hub conducted a full strip out, with enabling works uncovering original structural columns.

“The structural columns were a surprise as they were not highlighted in the original plans for the hanger,” says Joe. “We consulted with the Royal Air Force Museum to slightly change the general arrangement of the exhibition to incorporate the columns while remaining true to the vision for the space. Coordinating with the specialist sub-contractors the projector, silhouettes and totems were installed in areas which did not compromise the interpretative display and enhanced the aesthetic of the space.”

Another key challenge identified during the works was the fact that the hanger continued to be a primary route for visitors circulating through the site, especially in adverse weather conditions, which meant it had to be continually assessed to ensure the health and safety of visitors. 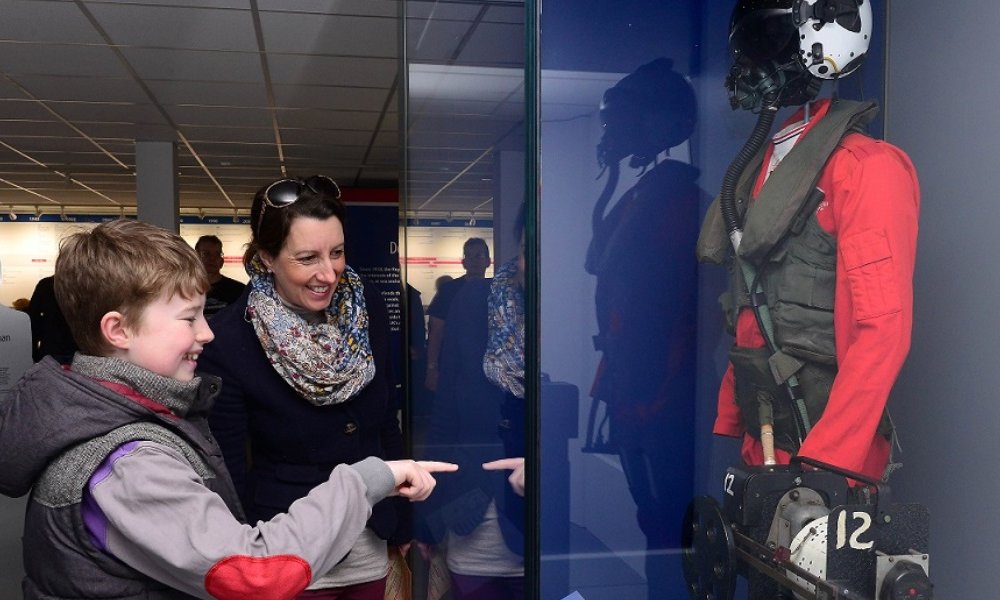 To make this work, The Hub securely partitioned construction and build areas and developed clear walkways to allow site works to continue during visitor hours with external works conducted in liaison with the Museum outside of opening hours.

“This considered approach taken to health and safety preserved the visitor’s high quality experience during the four week programme,” says Joe. “Our reaction to mitigating challenges was also tested during the installation of new flooring throughout the hanger with severe weather conditions affecting environmental conditions; resulting in the loss of one programme day. Working closely with our flooring and ceiling contractors and the Royal Air Force Museum, the flooring was heavily protected with additional labour agreed to allow for ceiling works to take place in parallel to regain project progress against programme so the critical dates were achieved.”

The display is part of a new Interpretation Strategy by the RAF Museum, which explores the roles of the RAF through its people as well as its unique collections.

The Cosford display features are four showcases with graphics that each depicts an area of expertise associated with the RAF: Attack, Prepare, Support and Defend There is then one large showcase, which has lots of quirky, small objects such as Christmas cards produced from the metal of aeroplanes by RAF soldiers at the front, a dog leash, uniforms, allowance books for tobacco and sugar as well as dinner invitations.

“We are the RAF Museum and we are now telling the RAF story through its amazing servicemen and women, so that’s the very big shift that everybody can understand. On both sites we never had an introduction explaining what the RAF is and what the RAF’s role is. And that is why we thought we would approach the story with the capabilities of the RAF that are often unexpected, such as support in the case of emergencies or disasters. Also that not all RAF personnel are pilots.”

Paul Hudson-Knight, Head of Marketing at the RAF Museum, says the new display will boost future fundraising strategies and will also indicate to visitors how the site will change and become much more accessible, and how the interpretation will be much more comprehensive. “The quality and nature of the displays means there are some real wow factors,” he says. “If you think about the objects, for example, the idea of having a Christmas card made of spare bits of metal from a damaged aircraft is something we would expect to grab the public’s attention and become a much-favoured object over time.”

What the Museum is doing, he says, is looking at ways which the Museum can make interpretation much more imaginative. “So, what it does is starts a process of exploration for people once they leave the site.”

A feasibility study is now underway at Cosford to determine future improvements and the two Museums will be complementing each other in terms of how they tell the RAF’s story globally.

The Cosford project was completed in time for the 1 April Centenary, enabling visitors to commemorate the past, celebrate the present and imagine the future of the RAF.