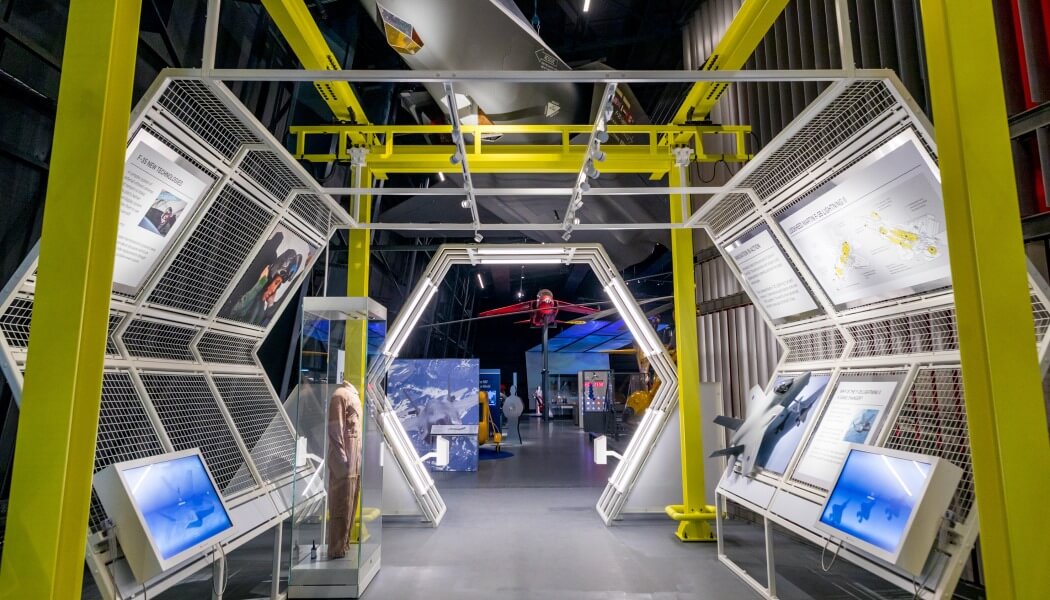 Main Image: RAF: The First to the Future exhibition in Hangar 1 at the redeveloped RAF Museum London. Photography courtesy of RAF Museum
Share

The RAF Museum London relaunched at the weekend following a £26m, HLF-supported redevelopment of two of its hangars, a new restaurant and a transformation of its public realm and site orientation

The transformation makes the RAF Museum the only place where visitors can test their flying skills, explore RAF stories, sit inside an iconic cockpit and enjoy a picnic in a single day

As part of the RAF Centenary Transformation Programme the museum site has become easier to navigate and more engaging and harmonious. It is now a place where visitors can relax, socialise, have more fulfilled family day outs as well as learn about the RAF.

The transformed Hangars 1 and 6 have a stylish and clean feel with their new floors and painted walls and ceilings (there doesn’t appear to be a thing out of place) and achieve a clever mix of intimacy, fun and spaciousness through the build, which was fitted out by The Hub, featured in the below Q&A, working alongside architects Nex-Architecture and designers Kossman.Dejong and Met Studio. 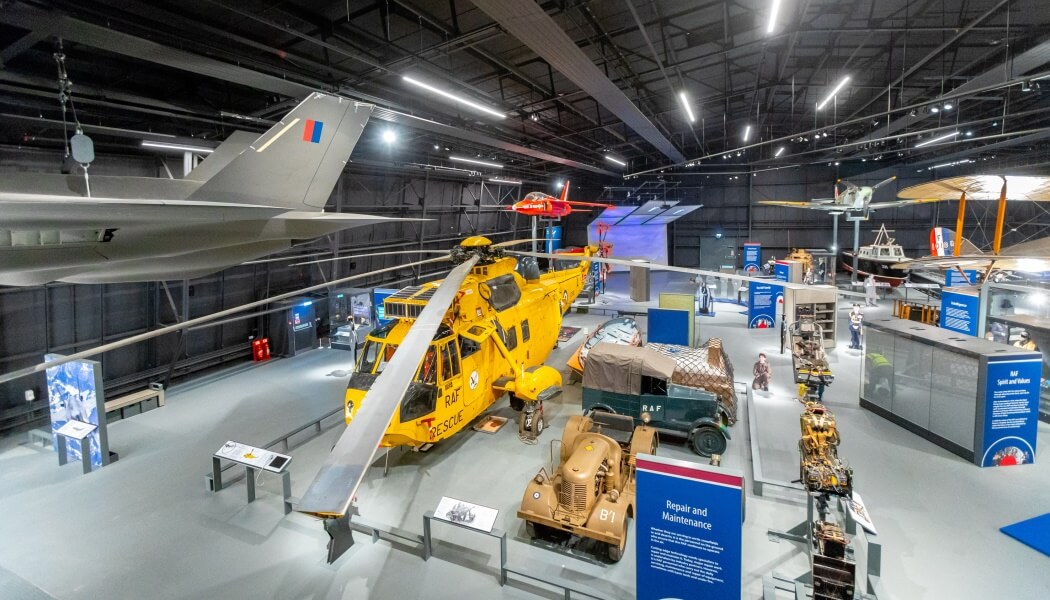 Visitors to the museum seem to immediately get to grips with the facilities and flow because of its intuitive design, which has completely reshaped the way they move around the site and also use the spaces.

Now there is a new car park leading directly off the main entrance from Grahame Park Way and as visitors walk from the car park they are directed to Hangar 1 along a newly laid path with grass verges either side.

With many visitors arriving by car or coach, some after long journeys, as well as those who walk or come by public transport, it was important that one of the closest amenities to Hangar 1’s entrance were toilets and lockers as these are usually the first thing visitors require: freshen up and unload their bags. Previously the orientation of the site was not as clear and visitors would struggle to find these amenities.

Once inside the redeveloped hangar visitors will see directly in front of them a central ‘hub’ structure with toilets, lockers a shop and café, a members’ room and viewing galleries, and to the right, the entrance to the new exhibitions. Opposite the shop there are also a row of benches and floor space for those who need to sit down or congregate and organise their group before embarking on the museum journey.

The entrance to the exhibitions spaces begins with visitors going through a dramatic floor to ceiling display of helmets and headwear worn by various RAF service members around the world and through time. 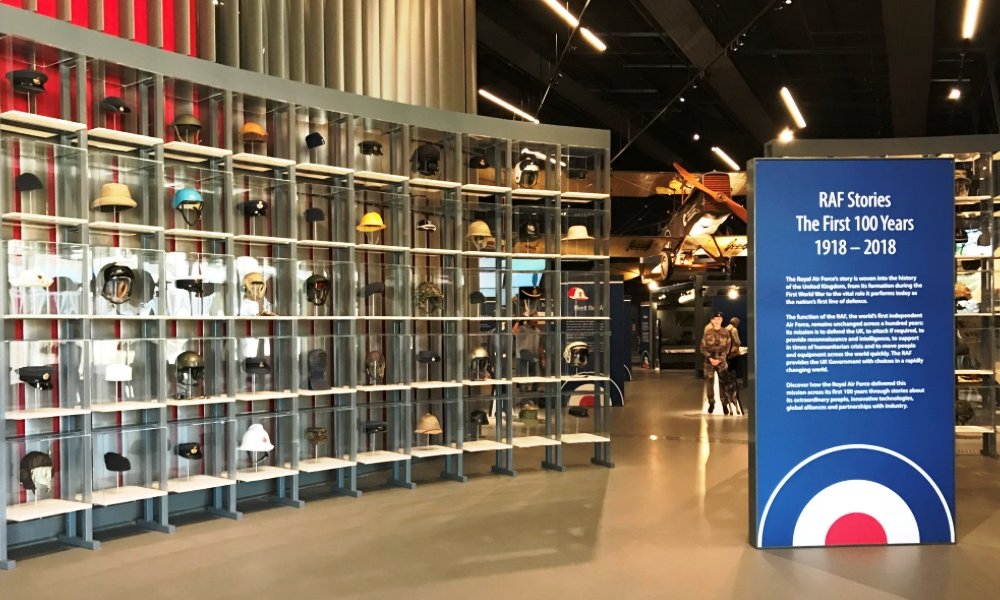 An impressive display of RAF headwear greets visitors to the RAF Stories: The First 100 Years exhibition

Hangar 1 has been transformed with two new exhibitions: RAF Stories: The First 100 Years – focusing on the people of the RAF through its lifetime and RAF: First to the Future, where visitors will find a selection of technological challenges that the RAF face on their missions around the world. As visitors walk around the exhibitions they will experience a variety of aircraft both suspended from the ceilings and on the ground, hands on displays, a flight simulator and objects in showcases.

It is here that visitors will encounter lifesize cut outs of individuals whose stories the museum have collected, some from our archives, but mainly from recent interviews with those who have just finished serving or who are still serving in the RAF such as Flight Lieutenant Julie Ann Gibson, the first female regular officer in 1991 and Flight Lieutenant Ayla Holdom, whose transgender identity was fully accepted by the force. 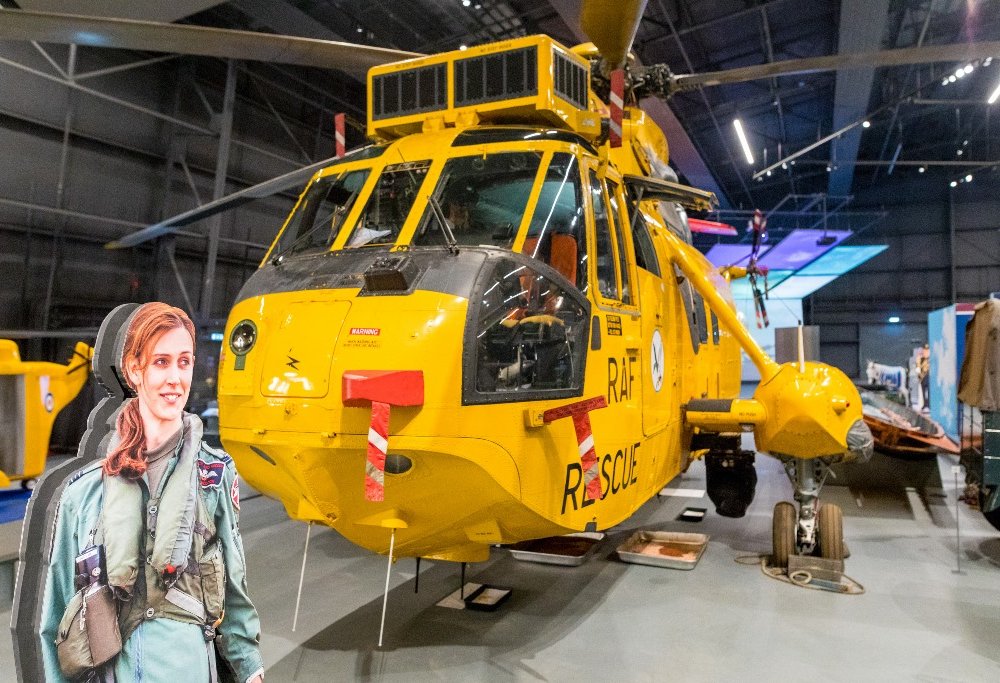 Once at the end of Hangar 1’s new exhibitions visitors will arrive at the new café’s seating area where they can sit under the flying boat patrol Bomber, the Short Sunderland MR5. A dramatic, large glass window covers the whole of the hangar doors on this side and is how visitors will leave Hangar 1 and continue their journey. 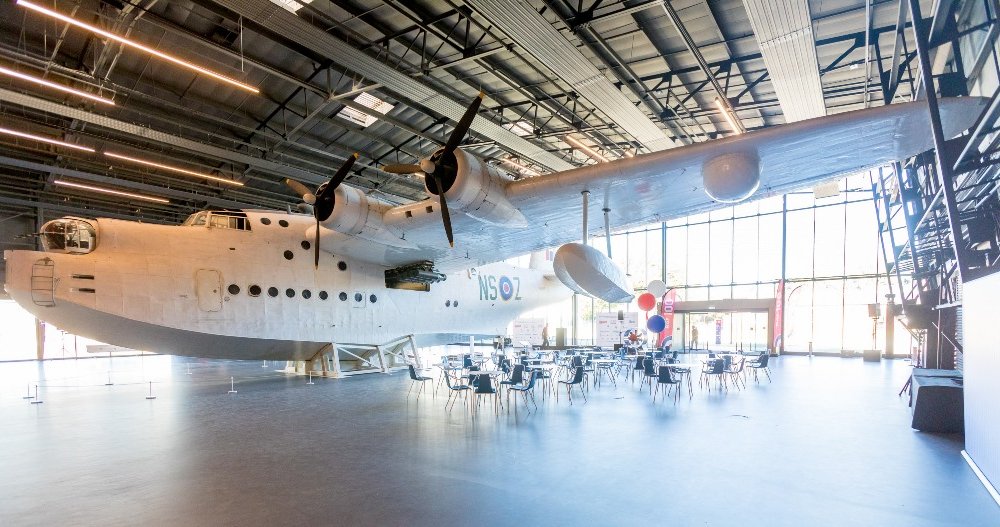 Walking past Hangar 2, which houses First World War in the air exhibition, visitors will find a new restaurant housed in a 1930s RAF building at the heart of the site. Following on from the restaurant is Hangar 6, which is also part of the transformation and introduces visitors to an array of recent combat aircraft and a display wall that contextualises battles in the late 20th century to early 21st century with exhibits, such as newspaper and magazine front pages, that give a perspective what was happening at the time. This new exhibition, The RAF in an ‘Age of Uncertainty, showcases a Harrier GR9A and Chinook helicopter and explores the more recent history of the RAF from the Falklands to the present day and interactives ask visitors questions about how they see the future. 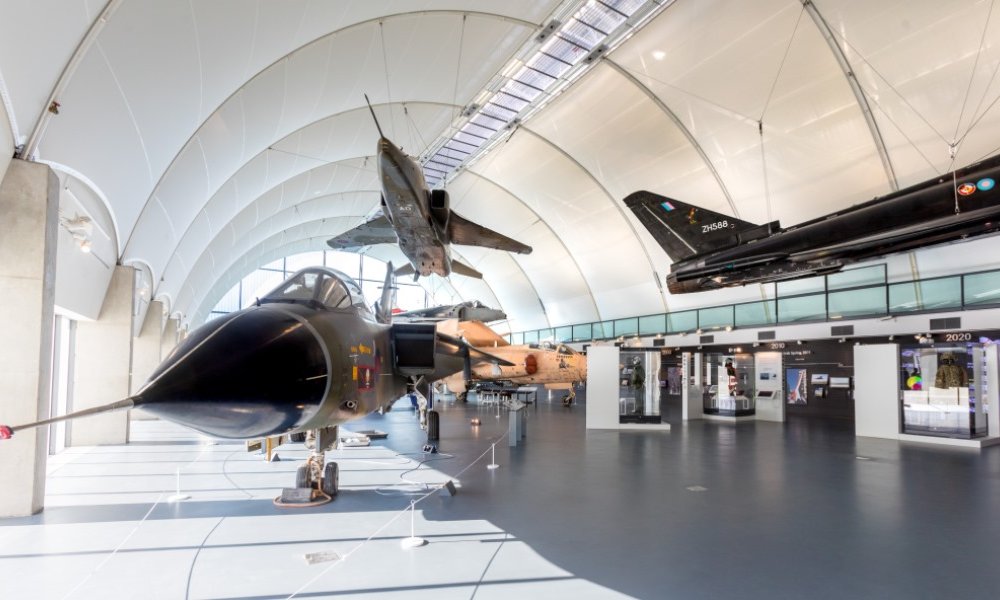 Hangar 6 introduces visitors to an array of recent combat aircraft

In between these buildings and Hangars 3, 4 and 5 is now a huge grassed square that was previously a car park, which now forms the heart of the museum site. These new spaces have opened up a host of opportunities for the museum to offer events with the green space already seeing the introduction of outdoor cinema and a series of lates taking place in the new restaurant including a recent comedy night. There are also plans to introduce sleepovers for adults under the Short Sunderland MR5 in Hangar 1. 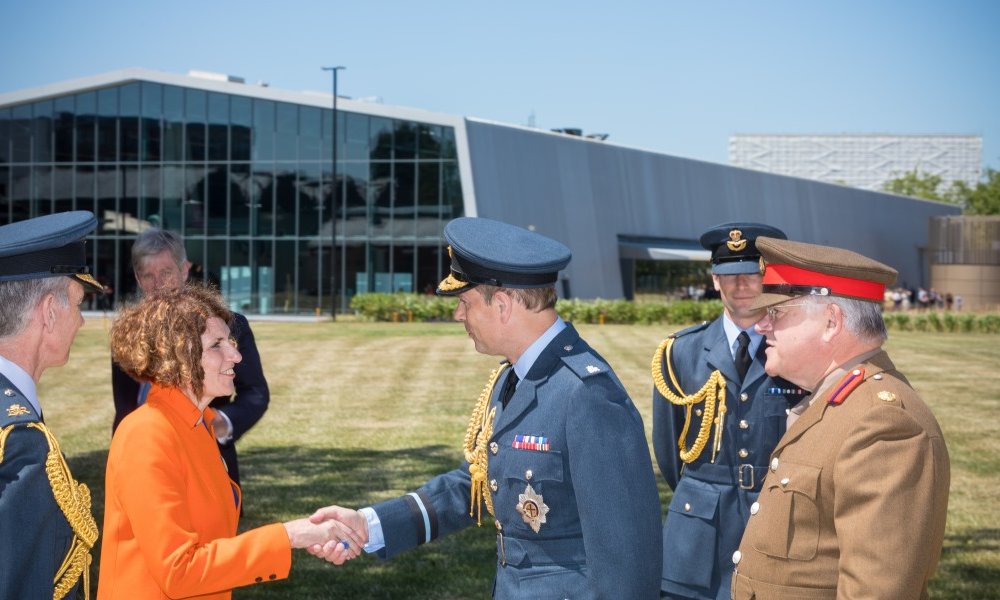 RAF Museum CEO, Maggie Appleton meets HRH The Earl of Wessex who opened the transformed RAF Museum London on the new green space with Hangar 1 in the background

“It was really important that we completed this project and completed it in 2018. The museum’s purpose is to tell the amazing stories of the Royal Air Force, its people and our incredible collections,” says Maggie Appleton, Chief Executive Officer, RAF Museum. “This is really the manifestation of that and it’s using our collections in thoughtful and engaging ways to tell a story that covers the whole hundred years and also bringing it up to date.”

She says the North London museum is based in an area where house building is going all around it, which has meant lots of green space being built on, and the project has enabled the RAF Museum to develop a welcoming space. “It really says to local people ‘come in, the museum is yours, it belongs to you, come and enjoy it with us, we are here for you to develop our story with you’.”

Bina Omare, Chief Executive Officer of Colindale Communities Trust, who works with 30 different groups, says that the museum’s community outreach programme has made a dramatic difference to how the organisation is perceived in the local community.

“This can be seen through local people who wouldn’t previously have gone to the RAF Museum or have seen it as a local place to actively get involved with,” she says. “But since the RAF Museum has been visiting the communities and leading focus groups, this has changed and they have invited locals into the museum as well during redevelopment and this has integrated the wider community. So, it has become a community resource rather than just a museum.”

Local schools have also been involved with the transformation including Colindale Primary School. Assistant Head of Key Stage One, Nisha Parmer says the school got involved last year when they brought all 190 year one children to the museum. “We then came back in September for a hard hat tour. “The children have found this very exciting and will visit time-and-time again as they are growing up.”

RAF Museum London and Cosford's Centenary Redevelopments with The Hub