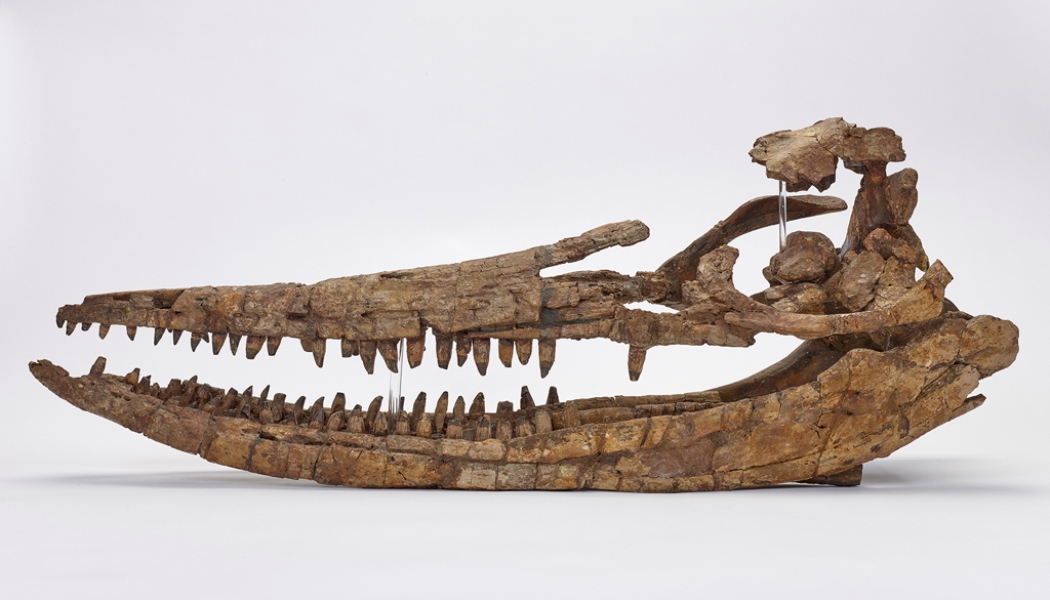 Discovered 61 years ago in a farmer’s field in Warwickshire the skeleton of the UK’s largest example of ichthyosaurus will be laid out in full for the first time ever at Thinktank, Birmingham Science Museum

The centrepiece of the new Marine Worlds gallery, which opens on Friday at Thinktank, Birmingham Science Museum will be the 200 million-year-old fossil remains of a prehistoric marine reptile. The dolphin-like ichthyosaurus would have been at home in the sea around the time the dinosaurs walked on land and was found in 1955 by a farmer at Fell Mill Farm in Shipston-on-Stour, Warwickshire and then excavated by Birmingham Museum & Art Gallery (BMAG) staff.

Now, following extensive two-year conservation, research and 3D-printing the skeleton is finally being displayed in full for the first time following a project partly funded by ACE , which allowed a team of experts to repair, rebuild and clean the skull.

Most ichthyosaurs are flattened during fossilisation but this example was preserved in 3D, enabling conservators to study individual bones that are not usually accessible in ichthyosaurs, such as those at the back of the skull and the braincase elements.

The preservation allows a unique insight into the skull of this ichthyosaur in particular but also ichthyosaurs more generally. The skull, which is 80cm long and 33cm wide, was cleaned by Nigel Larkin, a specialist palaeontological conservator, before being completely taken apart and reconstructed to be more anatomically correct, as knowledge of ichthyosaurs has increased since 1955 when it was first put together.

“It has been a delight to see the Thinktank ichthyosaur develop, from just a skull that was too fragile to be displayed to a beautifully conserved and completed skeleton that is the centrepiece of a new permanent gallery,” says Luanne Meehitiya, Natural Science Curator at Birmingham Museums. “The project has been full of surprises, including finding the rest of the skeleton in storage and discovering quite how important this specimen is. It is an amazing thing for Birmingham Museums to have this in our collections, and I am looking forward to watching people reacting to it in the gallery.”

The Thinktank ichthyosaur is approx. 3.5 meters long and the largest ichthyosaurus previously discovered was estimated at 3m, which means it is potentially a new species – with further studies continuing, which is why it is currently called Ichthyosaurus sp. 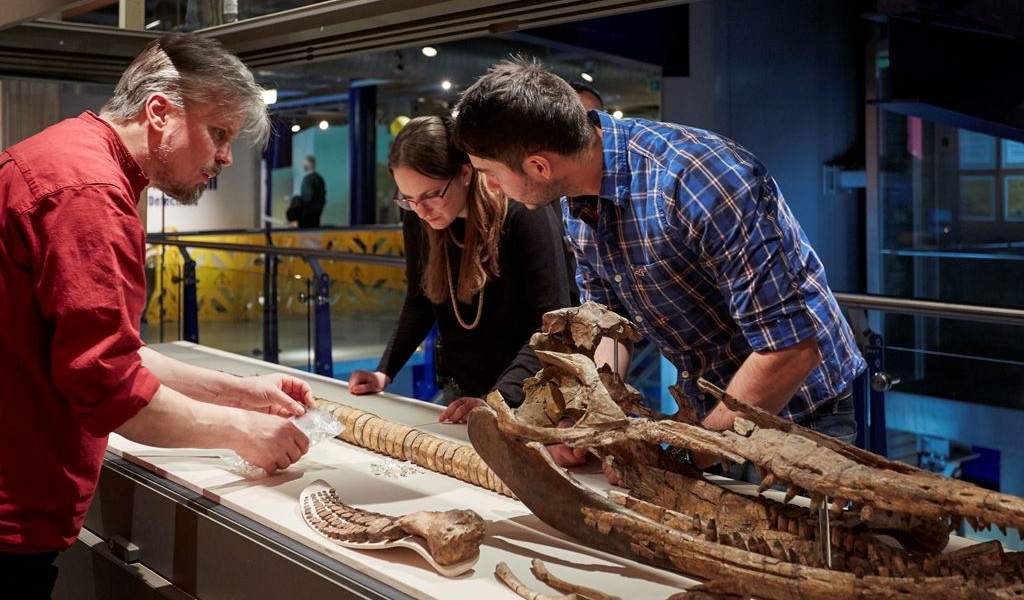 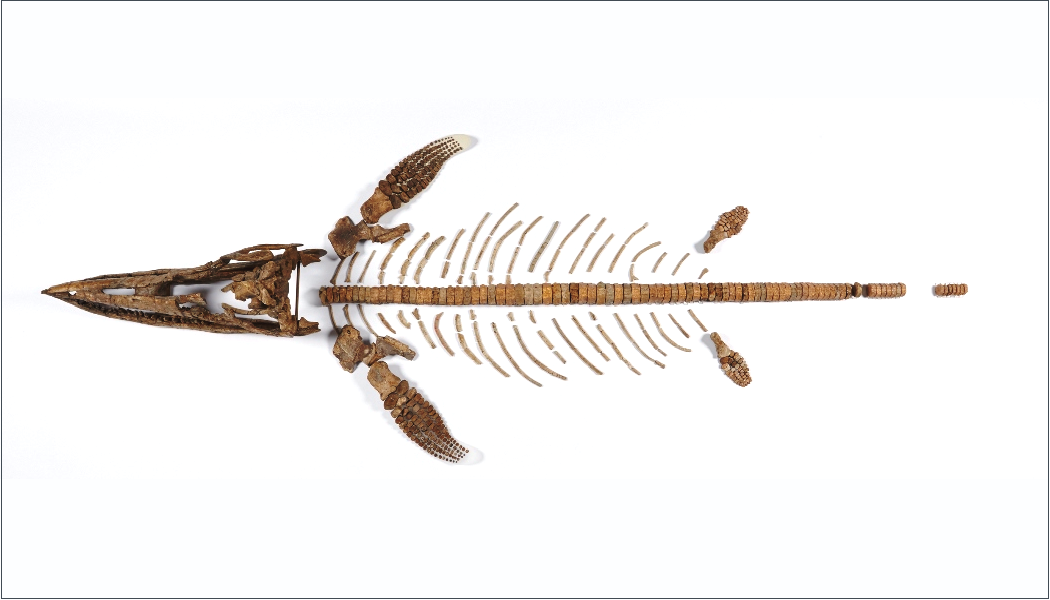 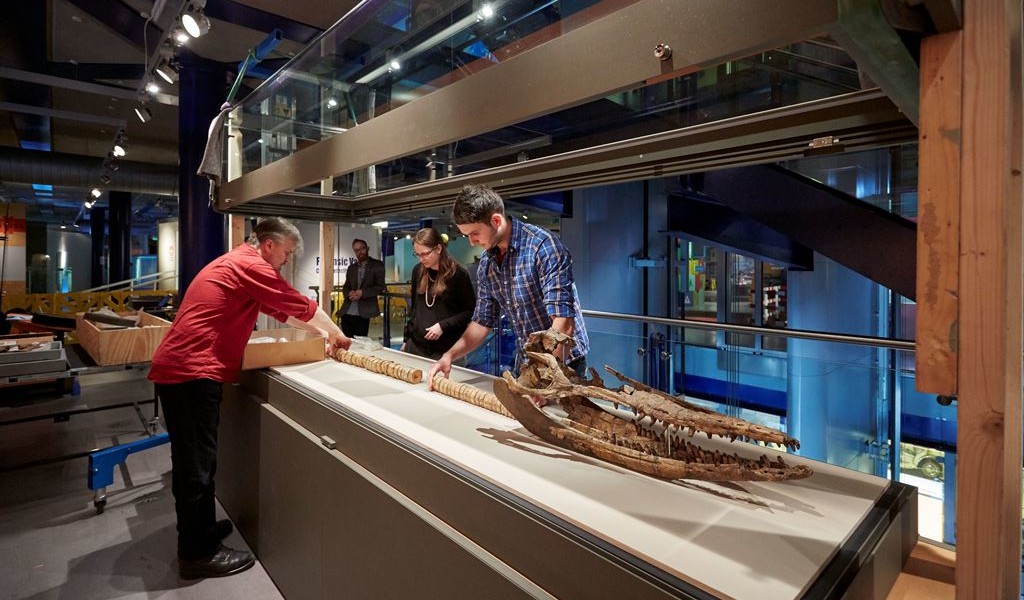 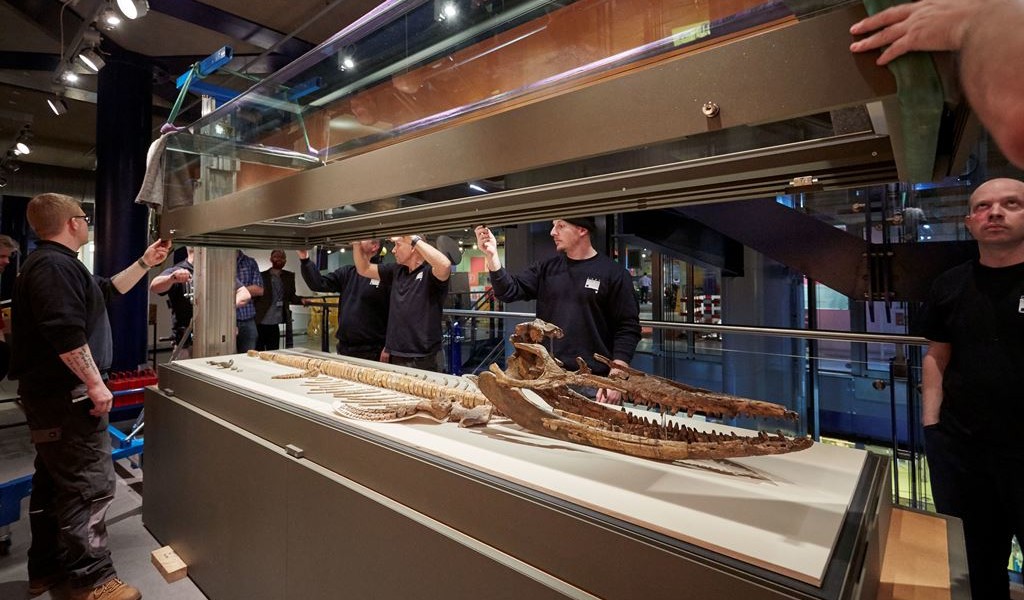 Dean Lomax, palaeontologist at The University of Manchester and ichthyosaur expert who has advised on the scientific rebuild and redisplay of the skull and skeleton, says: “This is a very important specimen. Not only is this the largest recorded Ichthyosaurus in the UK, but possibly in the world. It also comes from a location previously unrecorded for ichthyosaurs, so this adds to our understanding of the geographical distribution of ichthyosaurs during the Early Jurassic, a time when the UK was a series of islands. As for a new species, only time will tell.”

Ichthyosaurs evolved from a group of land reptiles that returned to the sea, just as modern dolphins and whales evolved from mammalian land ancestors.

During the project the team realised how important the skull was and had it CT scanned so that researchers worldwide could study the individual bones once they had been fitted back onto the skull. They micro-CT scanned individual skull bones and then scanned the whole skull, which allowed the team to create a 3D model. 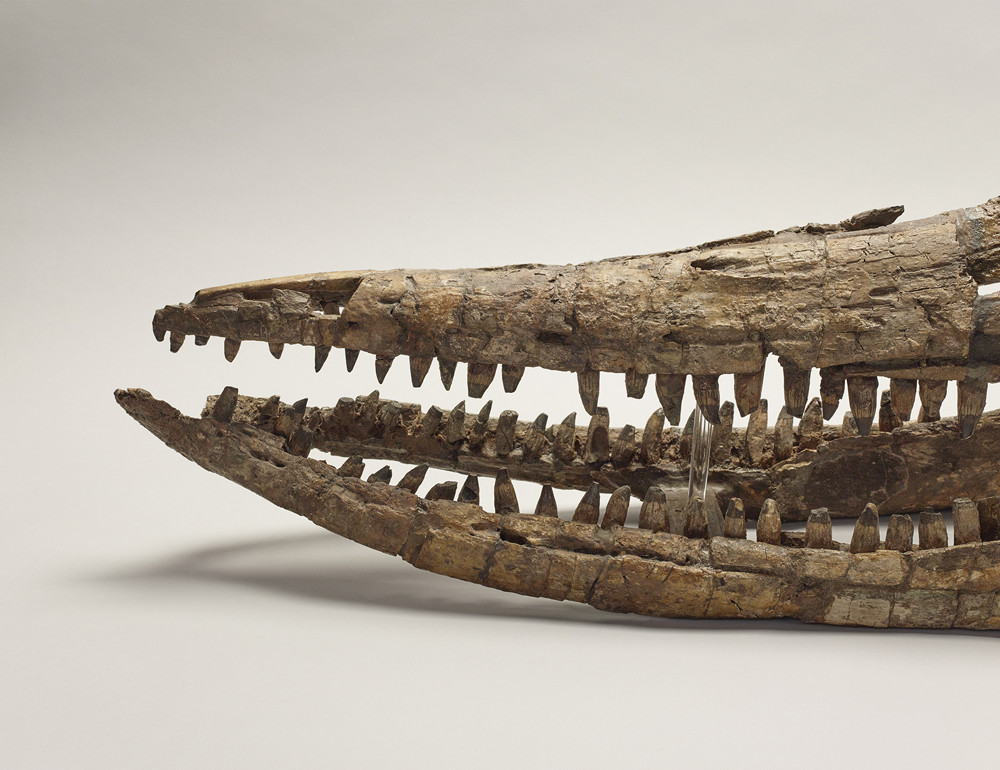 During the project the team realised how important the skull was and had it CT scanned so that researchers worldwide could study the individual bones. © Thinktank, Birmingham Science Museum

They also discovered the rest of the skeleton remains from the original excavation, which allowed them to reconstruct the reptile in full. “It was hugely exciting to find that we had the rest of the skeleton and it gave us the new aim of conserving it and putting it on display for the first time. The bones were very fragmented so it was clear that they had never been displayed and memory of their link to the skull had been lost over six decades,” said Meehitiya.

The Curry Fund of the Geologists’ Association saw the potential in the skeleton and granted funds for its conservation and completion. “The bones all needed cleaning and I spent many hours piecing together the fragments of rib like a huge 3D jigsaw puzzle,” said Lomax. “We decided to complete the appearance of the skeleton, but only using replicas that were based on existing bones. Luckily, one side of the skeleton was preserved more than the other, so we were able to work with ThinkSee3D to CT scan the fossilised bones, flip the data and then 3D print perfect accurate replicas of the missing limbs and some skull bones.”

Lomax also used the existing fossilised backbones to make moulds and cast replicas of missing backbones to complete the spine. “The most satisfying thing is how great the skeleton looks but that you would never know how much work went into it,” he said.

The Ichthyosaurs is a valuable example of land-living and air-breathing animals that evolved to return to the sea. The new Marine Worlds gallery will look at the many fascinating animals that have also left the land and adapted to a marine life including a taxidermy penguin, walrus skull and a fossil marine crocodile.

Thinktank has also worked with palaeo-artist Robert Nicholls to produce a new artistic reconstruction of the ichthyosaur, which gives a much better impression of what the massive marine reptile would have looked like and is displayed life-sized above the skeleton. As well as this Thinktank has been able to bring the specimen to life with a 3D interactive by Taran Singh, who has created an interactive digital model of the ichthyosaur. Visitors can use it to learn about the behind-the-scene’s story of the conservation and research, including being able to play with the digital model of the skull created from the CT scan.

The Thinktank ichthyosaur skull. The preservation allows a unique insight into the skull of this ichthyosaur in particular but also ichthyosaurs more generally. © Thinktank, Birmingham Science Museum