The Heritage Lottery Fund (HLF) grant means that work can now begin on building a dramatic two-storey museum extension, and renovating the centuries’ old castle’s state rooms, from where the powerful Prince Bishops of Durham once ruled the North of England unopposed

A HLF grant of £9m to Auckland Castle comes one month after planning permission was granted by Durham County Council for the £17m restoration and is a key part in the wider £60m renovation of one of Britain’s most important historical sites, which will be developed by Auckland Castle Trust as a new heritage destination.

Diarmaid MacCulloch, Professor of the History of the Church, University of Oxford has described the site as “the third best episcopal complex in the world, beaten only by the Vatican and Avignon,” and it will now undergo the most significant development in its remarkable 1,000 year history.

The Castle Trust projects 120,000 visitors each year to the project and will create more than 100 full-time jobs and generate £3m of annual revenue in an ambitious heritage-led social regeneration initiative for the North East of England.

The £9m grant represents one of the largest made by the Heritage Lottery Fund in the North East of England. “It is fantastic news not just for Auckland Castle but the whole area, a real vote of public confidence,” said David Ronn Auckland Castle Trust’s Chief Executive. “The HLF decision comes on the back of two years of hard work by a great many people. To say that we are absolutely delighted is an understatement, and the size of this award proves that the North East is taken seriously by the Heritage Lottery Fund. The work it will allow us to do at the castle, and all the activity that will flow from that – job, training and volunteering opportunities – will play a major part in helping to breathe new life into Bishop Auckland.”

The Auckland Castle Trust has pledged £7m towards the total £17m cost of the project, which includes a museum extension and overall restoration scheme, with the HLF grant making up the remainder.  The HLF had already awarded initial support of £1m in 2013 to develop the proposals, taking the granting body’s total commitment to the project to £10m.

The museum extension will be built on to the existing 16th century Scotland Wing and will house a new immersive museum experience over 11 galleries exploring the history of faith in the British Isles. The building has been designed by Niall McLaughlin in association with Purcell and echoes wooden Anglo Saxon churches of the 6th and 7th centuries.

Jane Kennedy, Partner at Purcell UK said: “Detailed historical studies and archaeological investigations have informed the design team during the development of proposals to repair and reuse the building. We have gained a new understanding of the medieval castle, and of the 18th and 19th century bishops who developed both the formal entrance and suite of state rooms. These rooms will be redecorated and presented in order to tell the stories of the bishops from the medieval period to the present day.”

The ground breaking exhibition will include a permanent and dynamic multi-media installation of both national and international significance presenting works of art and artefacts covering pre-history to the present.

Visitors will be challenged and excited by objects dating back to when our earliest ancestors in Britain started creating art, through to the impact of faith on the formation of contemporary society.

Dr Chris Ferguson, Auckland Castle’s Curatorial and Exhibition Director, said: “It will be a permanent and dynamic multi-media installation of both national and international significance presenting works of art and artefacts covering prehistory to the present. The visitor will be able to see objects going back to when humans first started functioning as a society as we would understand it today, right up to our modern times. We will be drawing on film, audio, interactive displays and stunning relics to tell the story of the many diverse faiths that make up the fabric and history of the British Isles.”

Among the remarkable and powerful items that will be on display will be the Cottingham Tank, a Viking lead font that is a fusion of Pagan and Christian beliefs. The Auckland Castle Trust has also acquired four rare stained glass panels from Compton Verney that were among the last to be made before the Reformation, and two striking Bronze Age swords that were deliberately deposited as votive offerings.

Work on this and the renovation of the Scotland Wing will begin in spring 2016. Phase two within the castle, which will see the palace home of the Prince Bishops returned to its former grandeur allowing the stories of those who have lived, worked and died within its walls during its near 1,000 year life to be told, will start in September next year. 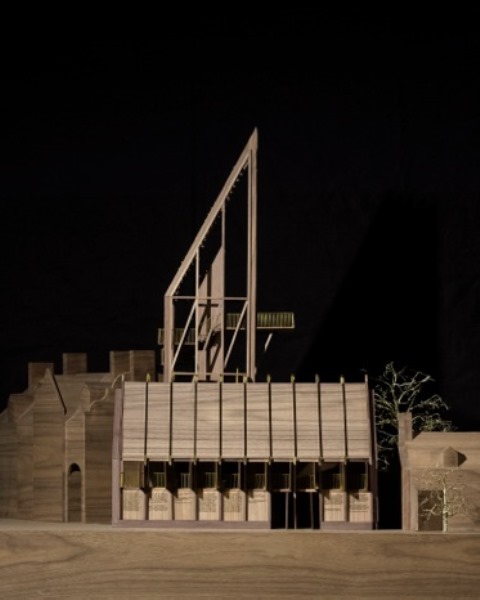 All the work will be completed by 2018. In a completely separate ground breaking scheme, the Auckland Castle Trust was in March granted planning permission to build a visually stunning £2.5m welcome building to greet visitors to what is one of Europe’s most important ecclesiastical sites. Work on this will start in November this year and take around six months to complete.