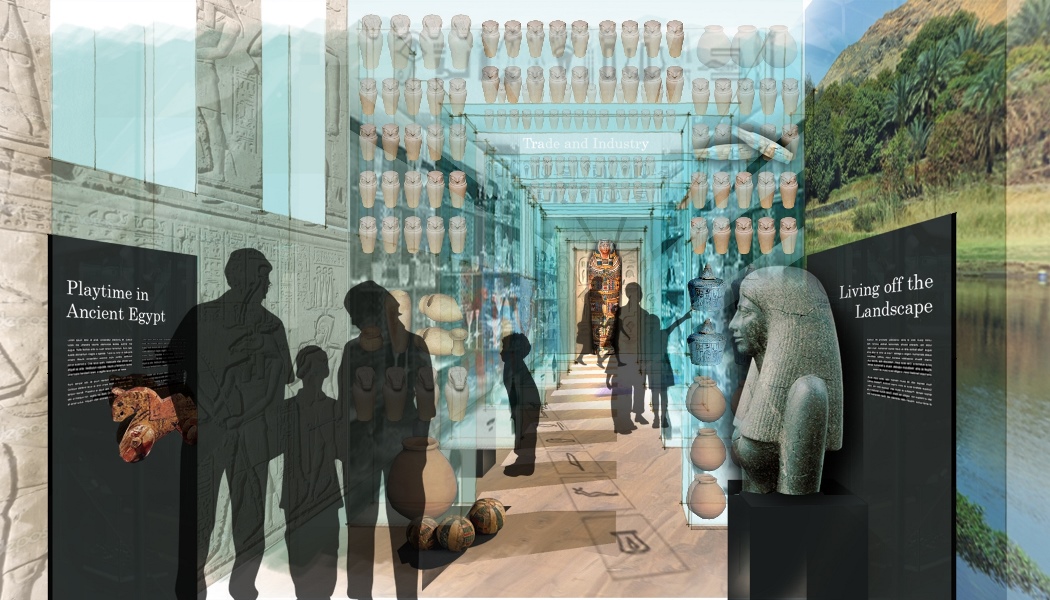 The Eternal Egypt gallery will replace the museum’s current Egyptology exhibition, and feature a full size reproduction of the burial chamber of Thutmose III as its centrepiece

Conceptual designs of Bolton Museum’s new Egyptology Gallery have been drawn up by Huddersfield-based exhibition designers Leach Studio. These designs are now being shared on the museum’s Facebook page, and amongst community groups and school groups, to establish the public’s views on the designs.

More detailed concepts will then be drawn up over the next few months and final designs submitted in the spring, with the museum re-opening to the public in 2018.

The Grade II listed building also needs essential maintenance work which will be incorporated into the refurbishment. The £3.8m project will be funded by one-off capital funding from the council, income from the museum’s touring exhibition and a contribution from sponsor Eddie Davies.

Bolton Museum had applied for HLF funding but during negotiations said they redesigned the scheme to make better use of existing gallery space and address urgent maintenance work. The council said that if it had resubmitted its revised plans to HLF, it would have had to start the funding process again and chose instead to go it alone.

The Leader of Bolton Council, Coun Cliff Morris, said he was confident the new scheme would be able to address any maintenance issues, as well as deliver a fantastic new gallery for the museum’s Egyptology collection which is part of an overall strategy to regenerate the town centre.

“The museum is a huge asset to the Bolton family. It is one of the top tourist attractions in Greater Manchester, with a respected international reputation for its Egyptology collection,” he said. “I remember taking my own children to the museum – and now my grandchildren – as I am sure is the case for many families across the borough, and it is important to ensure we undertake the highest standard of work that does justice to its historic significance.”

Bolton’s Egyptology collection is one of the most significant ancient Egyptian collections in the UK with 15,000 artefacts. The majority of the objects are excavated and thus retain full provenance information.

The collection owes much to the work of Annie Barlow, a local mill owner’s daughter, who was a member of the Egypt Exploration Fund in the 19th Century and helped to raise funds for excavations in Egypt. In return she was gifted a number of finds, which she donated to the Chadwick Museum – the Victorian forerunner for Bolton Museum.

Eternal Egypt will document this historical connection as well as exploring ancient Egyptians’ fascination with the afterlife.

More than 250 items from the collection have been on loan to the hugely popular touring exhibition ‘The Quest for Immortality’ since 2011 and the Thutmose III tomb was built exclusively for the tour. On entering the new exhibition, visitors will be welcomed by an area called the Rotunda which will set the scene and give an explanation of why Bolton Museum has such an extensive Egyptology collection.

A section named Land & People has also been proposed which will be devoted to artefacts showing the everyday life of Egyptians. The focus will be on subjects like the environment and beauty, and feature an interactive mummy as centrepiece. The Eternal Egypt experience could then take visitors through to the darkened Beliefs section – focussing on death and the afterlife – before leading to the museum’s facsimile tomb of Thutmose III.

A Reflections area of the gallery has also been planned with the potential to offer visitors the chance to reflect on why Boltonians are similar to Ancient Egyptians, looking at the similarities between the two groups hundreds of years apart.