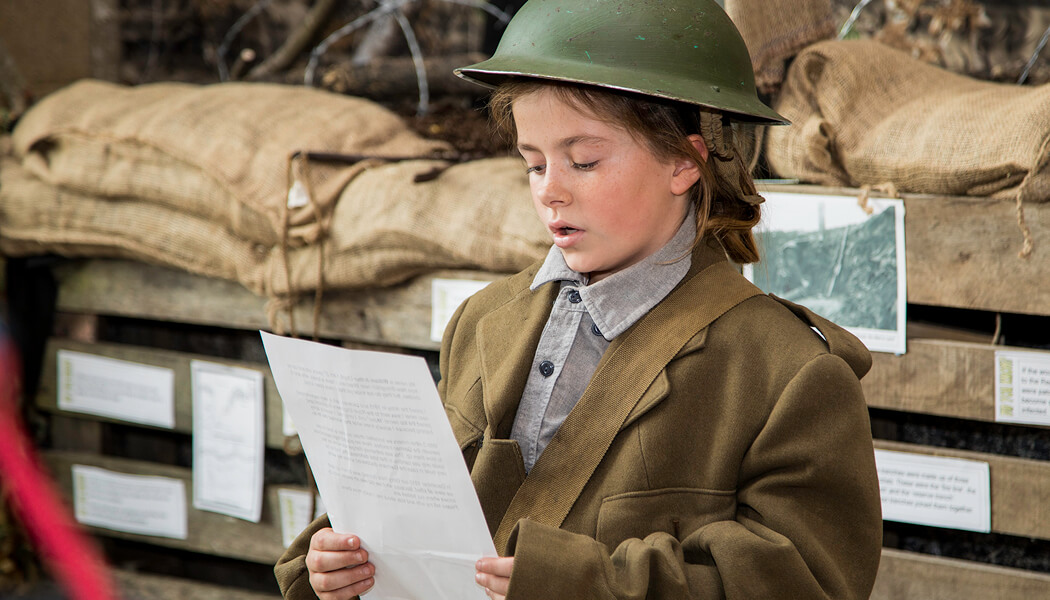 Students from five Wrexham primary schools become curators, costumed interpreters and press officers as they recreate WWI/WWII scenes of ‘Courage and Strength’ as part of an exhibition of Remembrance and Heritage

Here 16-year-old Tyler Agyapong documents the day the students took over Brymbo Heritage Project, which is raising funds to create a new heritage centre in Clwyd

It was great to see children from different schools working together. I’m sure that all those taking part today had a great time. We all felt a real sense of achievement at the end result.

Every pupil in the five schools had been invited to make a poppy during October to contribute to the finished exhibition. Year six children also entered a competition to design a Remembrance badge. Five winners from each school were selected by a panel including a member of the local British Legion group to participate in the Takeover Day on 9 November.

Liz Mann, Project Officer at Brymbo Heritage said: “The standard of entries was extremely high. All students should be very proud of their work. It was touching to see how many had carried out additional research, taking the opportunity to speak to older friends and relatives about experiences during WWII and to investigate family connections with those who fought in the Great War”. 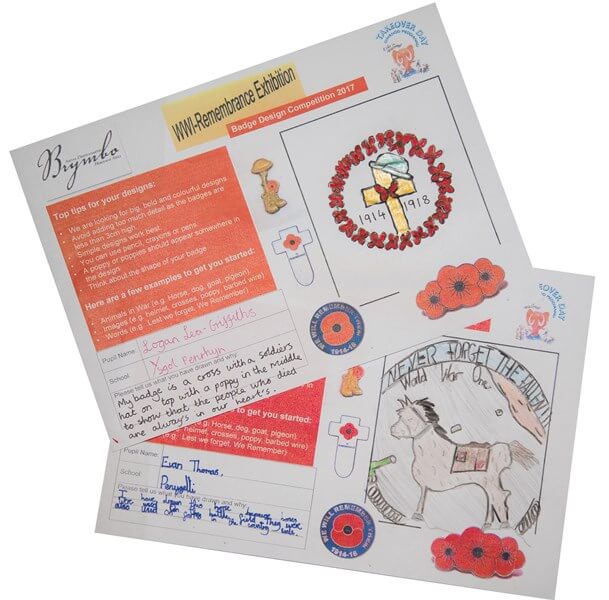 Logan Lea-Griffiths, aged 10, from Ysgol Penrhyn explained: “My badge is a cross with a soldier’s hat on top with a poppy in the middle, to show that the people who die are always in our hearts”.

Evan Thomas, aged 10, from Ysgol Penygelli researched animals in war, “I have drawn a horse because horses were used on the battle field and they were also used on the farms in the countryside”.

On the day itself students worked with Brymbo Heritage staff and volunteers learning about WWI women munition workers, Red Cross nurses and soldiers in the trenches as well as courage shown by evacuees during WWII.

At the start of the day, the first task was for everyone to create a WWII gas mask box and complete an identity card. Students had to keep these with them at all times, to experience what it was like. We even had a couple of Air Raid practices where we had to go under the tables. It was very loud but a lot of fun.

In advance the day, all students had chosen which role they would like to perform on the Takeover Day itself. 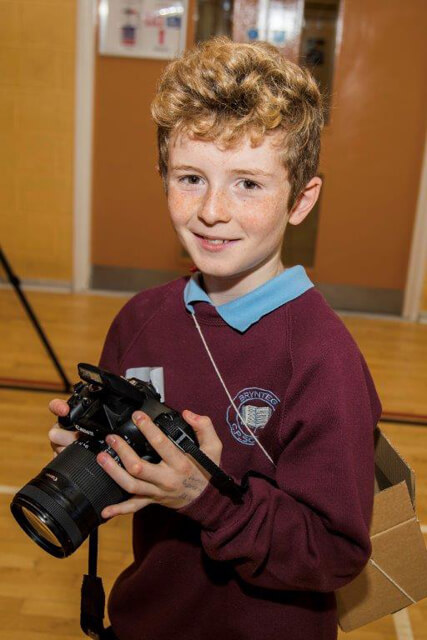 Cady Jones (main image) and Lillie Davies both from St. Mary’s, Brymbo opted to perform the role of Costumed Interpreters. Cady took on the role of William Arthur Lloyd from Gatewen village, who was an engineer and Sapper who built secret tunnels under ‘No Man’s Land’. It was really interesting finding out about his story which has only just come out, 100 years later. “I found out that he joined the Army in 1915 and because he was a very experienced coal miner he was sent to the Royal Engineers Regiment and joined the top secret ‘Moles’ unit. He tunnelled under no-man’s land with three other miners to get beneath the German trenches and placed high explosives to blow them up. It was extremely dangerous work as they could only use candles in that total darkness. They had to be very quiet in case the Germans discovered where they were”.

Lillie, investigating female munitions workers, explained how women were an important part of the munitions industry. Taking on the character of Gwen Randals, a former farm girl who joined Powell Brothers Munitions factory in Wrexham at the age of fourteen she explained how her job was to fill high explosive shells for the Army. 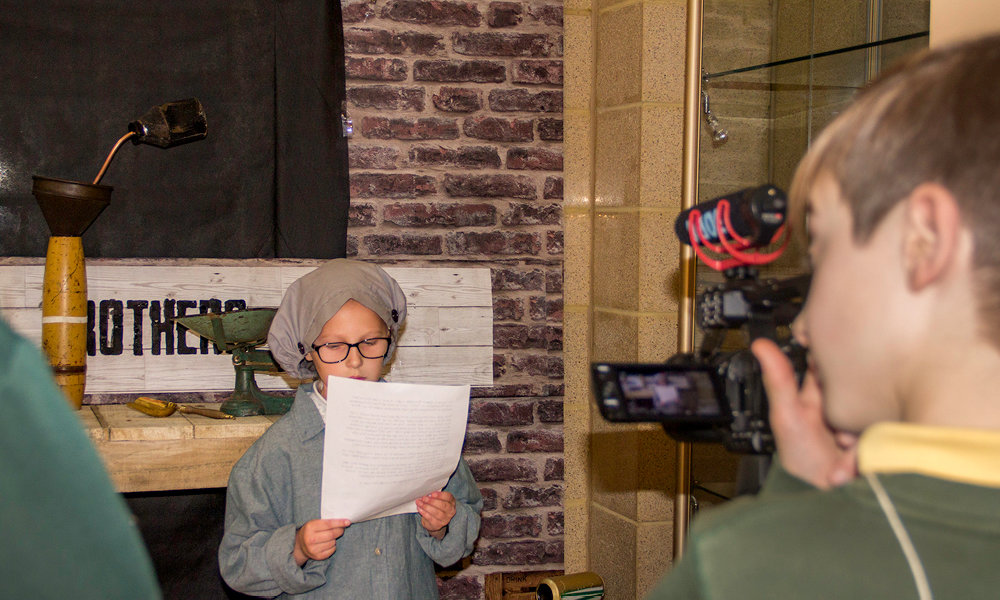 Lillie Davies from St Mary’s, Brymbo was a costumed interpreter for Takeover Day

“This was very dangerous work”, Lilly explained. “Just a small spark could set off a massive explosion”. “The TNT explosive they used turned their skin and hair yellow, so they all became blondes. Powell’s was not as 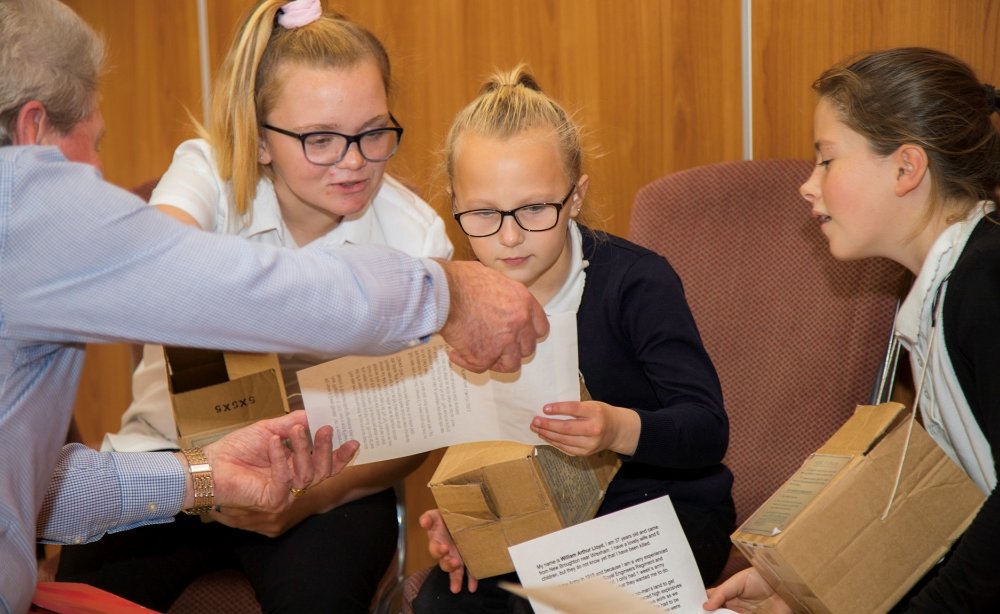 bad as the Queensferry works. Yellow girls who worked in these factories were nicknamed ‘Canary Girls’. You could even give birth to a yellow baby!”.

During the day Lilly and her team, including Eve Jones from Ysgol Tanyfron, helped recreate a munitions factory diorama representing Powell Brothers Munitions Factory, in Wrexham, creating walls, pasting wallpaper and stippling the factory sign. They also dressed a mannequin for the diorama to represent a female munitions worker. “Munitions workers couldn’t have any metal on them in case it made a spark. Even metal fasteners in underwear were not allowed”.

Kids in Museums Takeover Day is a really good way for children to experience what it is like working in a museum or heritage area. It was great to see children from different schools working together. I’m sure that all those taking part today had a great time. We all felt a real sense of achievement at the end result. The dioramas look great. There is still lots to do; the interpretation panels and posters to put up, not to mention over 500 poppies made by the local primary schools, so the finished exhibition will be even better! It was good to be a part of it.

Once completed the exhibition, including the four dioramas, will be open to the public from Monday 20 November to 31 January.

This is the third Kids in Museums Takeover Day that I’ve been involved in as a Brymbo Heritage Volunteer and I’m already looking forward to next year’s project. Watch this space!