The First Light Pavilion, designed by Casson Mann, opened to the public in June. The leading exhibition design studio created ‘The Story of Jodrell Bank’, the permanent exhibition for this purpose-built visitor centre at Jodrell Bank Observatory, a UNESCO World Heritage Site in Cheshire, England.

The fully immersive and interactive visitor centre presents the inspirational human story of Jodrell Bank, the world’s first radio astronomy site and home to the radio telescope that detected quasars, pulsars, black holes, and the rocket path of Sputnik 1.

Jodrell Bank became a UNESCO World Heritage Site in 2019, supercharging the need to conserve and present its heritage, and the story of its founder Sir Bernard Lovell, to the same standard as its world-leading science. The exhibition explores this rich history—from the early days of radio astronomy and Lovell’s childhood to Jodrell Bank during the Cold War and its cultural legacy today—through audio, film, diaries, letters, plans, notebooks and photographs, interactive and projected media.

Casson Mann conceived of making the fabric of the exhibition from the skin of the Lovell telescope, bringing visitors into direct contact with the authentic metal dish that has ‘looked’ towards the heavens and been touched by cosmic rays and ‘space dust.’ These metal sections are arranged in a circular panorama, around which the Pavilion building itself was designed: architects Hassell Studio created an inverted dome of the same 76m diameter as the Lovell telescope, complementing the array of dish panels within.

Use of the Lovell telescope’s metal ‘skin’ was an unusual, even a unique, opportunity. When Casson Mann were commissioned to undertake the visioning study (HLF Stage1) for the First Light Pavilion, the 1957 dish of the Lovell telescope was soon to be removed as part of planned renovations. The timing was just right: if the original contractor had been successful, most of the metal would have been scrapped, but as it was, the delay in the process of removing the old dish was a stroke of luck for the design studio. The client offered up part of the dish for possible use in the Pavilion interior. Casson Mann recognised the full scope of this and made huge segments of the telescope the core aspect of their design.

Extracting these chunks of telescope dish was a significant challenge. The constraints of the site meant the design team could not use whole dish segments from core to rim, so they had to think strategically about how to cut out substantial sections. They took inspiration from the sculptural lines and curves used in ancient observatories, such as at Jantar Mantar in Jaipur, India, and decided to cut out smaller, more manageable dish fragments which could be pieced together into great 6m x 4m curved panels. Disassembling and reassembling these fragments was an enormous jigsaw puzzle, requiring meticulous planning and problem-solving. Each of the large dish parts in the exhibition was composed of around 16 smaller sections, which were removed individually and numbered before being reassembled onto a newly constructed aluminium frame, hand-rolled to match the curves of each row of the panels. 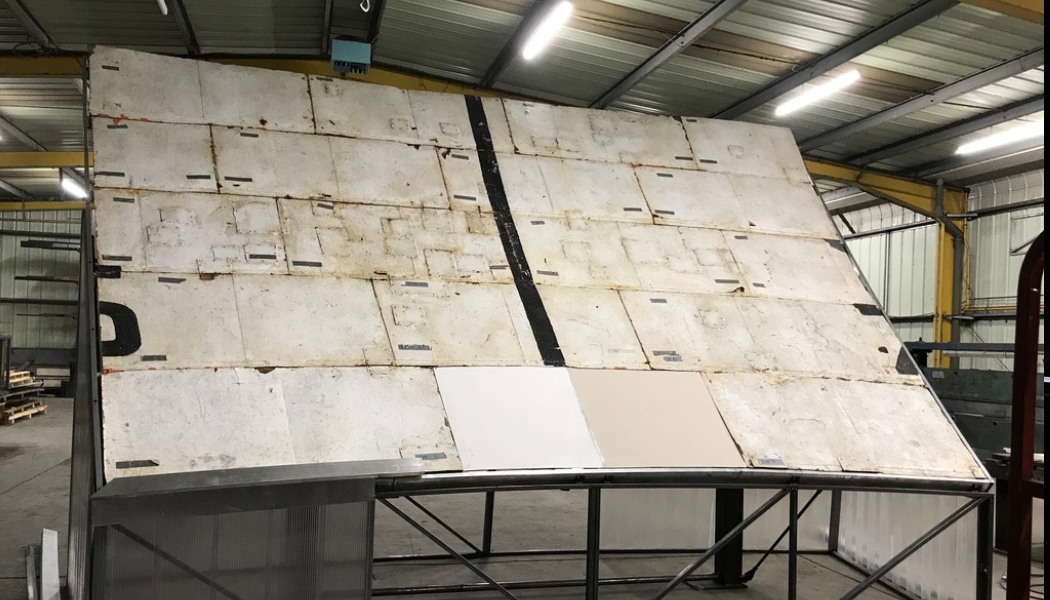 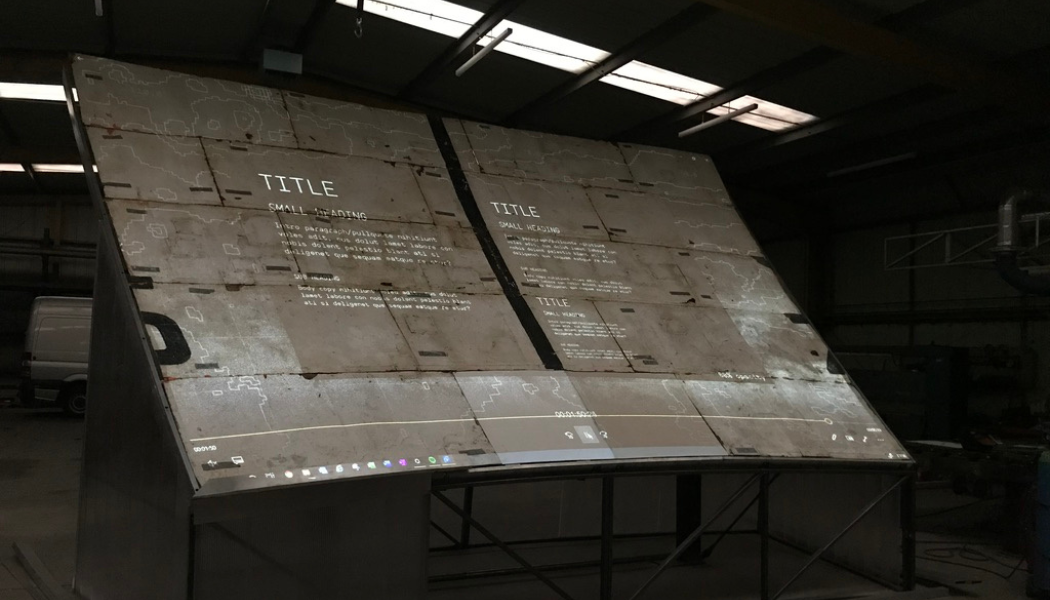 Roger Mann, Casson Mann’s co-founder and director, said: “Incorporating the original telescope skin lends the First Light Pavilion particular gravitas, as we weaved the heritage steel into the fabric of the exhibition in a unique and poetic way. A serious historical artefact salvaged for this remarkable display, the dish fragments reveal not only their own story, but the story of our place in the Universe.”

As the most important material evidence of the Jodrell Bank story, these telescope panels provide a structure for the exhibition, both narratively and physically. They become a projection surface for dynamic multimedia, mapping both the earthly stories of Jodrell scientists and the cosmic sphere which they revealed to humankind. These projections range from the bicycles ridden by Jodrell scientists to astronomical charts of constellations overlaid with radio maps, and a Sputnik which soars across the entire telescope array. Since the lighting makes the perimeter walls ‘disappear’, the panels appear to float beautifully in outer space. Visitors experience a spectacular, changing universe of meteors, rockets, and satellites.

John Pickford, Casson Mann’s lead design director, said: “For us, the telescope dish was the perfect exhibition material. The Lovell telescope is an icon of British science, a spectator and maker of history. This ‘Inquisitive Giant’ recorded data from the cosmos during the early era of space exploration and was witness to the unveiling of the hidden universe. Our design lets this unique object ‘speak’ by projecting its own history back onto its surface.”

The exhibition emulates the charming and quintessentially British character of Jodrell Bank. Scientists worked in their wellies, sitting in deckchairs and cycling between sheds, surrounded by cows and in muddy fields originally intended for botanical studies. The ‘garden shed’ nature of the operation makes a brilliant counterpoint to the subjects of scientific research here—supernovas, black holes, pulsars, the universe itself. In the exhibition, structures which house exhibits and interactives are based on mid-century furniture and materials at Jodrell: old filing cabinets, colours, and finishes are drawn from these huts in Cheshire where British scientists expanded human knowledge of the universe.

Interactives bring to life these pioneering astronomical discoveries. Visitors are empowered to ‘drive’ the Lovell telescope themselves from a control desk, recreated in grey metal, with a large four-screen video wall replacing the four-pane window that looked out onto the telescope. They can crawl into a black hole, climb into a flying saucer, and sit in a deckchair to experience how Lovell and his team recorded visible cosmic phenomena in the fields at midnight.

The audio quality is dramatic and distinct. As visitors cross the threshold, they pass from a noisy entrance zone with hard concrete surfaces and echoing footsteps, to a huge, acoustically soft space. They experience an unusual sensation: instead of being echoey, this large exhibition area has been acoustically treated, with carpet on the floor and felt on the walls, so visitors hear only the noises they are meant to hear. The ‘spacey’ soundtrack has a real scale to it, giving visitors the feeling of stepping into outer space. The carefully choreographed experience creates a real sense of wonderment.

According to audience feedback, 95% of visitors agree that the heritage of Jodrell Bank is presented and explained well. Meanwhile, 92% rated the First Light exhibition as either Good or Very Good.

Professor Teresa Anderson, Director, Jodrell Bank Centre for Engagement said: “The First Light Project has involved an incredible team of creative, skilled and committed people, all of whom have put their hearts into it. The result is something really special and unique—there is nothing like it anywhere in the world—and it will stand at Jodrell Bank for generations to come, offering people of all ages a chance to be inspired by our place in the Universe.”